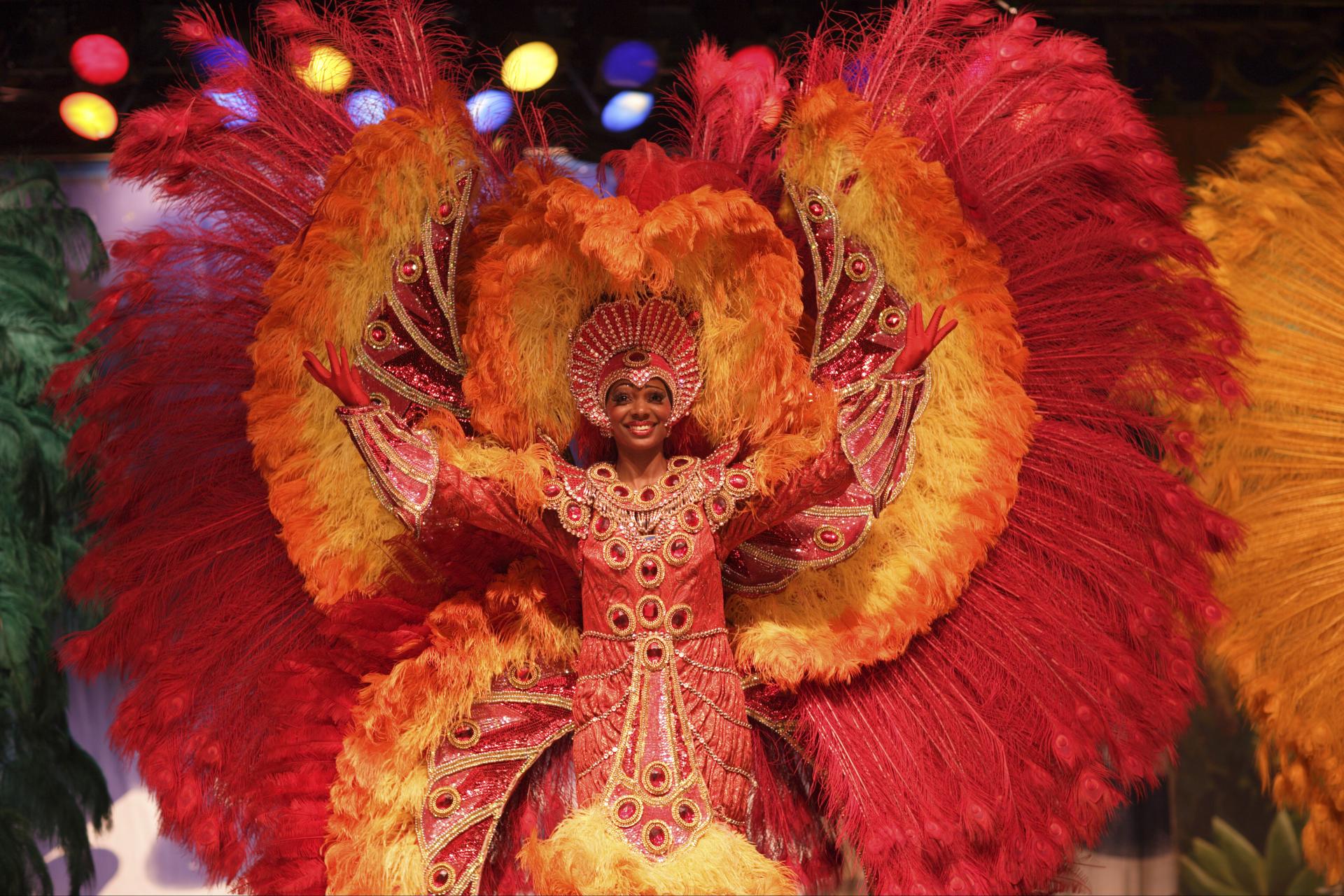 The former capital of Brazil, Rio de Janeiro, is located in the state of the same name and is a popular destination on Brazil trips. The Cidade Maravilhosa, in English the "Marvelous City", inspires its visitors with many sights such as the Corcovado and the Statue of Christ standing on it, the Sugar Loaf Mountain, the cult beach Copacabana, the famous cog railroad of Santa Teresa, samba, and of course the famous carnival. The so-called carnaval is celebrated in Rio with spectacular parades of the samba schools, which are known all over the world.
But do you know how the tradition of carnaval in Rio de Janeiro began and since when samba has been a part of it?

How it all began: The tradition of samba and carnival in Rio

Carnival has always been a mass event, and even the Greeks and Romans held similar celebrations. Later, the Roman Catholic Church made carnival a celebration that preceded Ash Wednesday, the first day of Lent in the Christian calendar. Entrudo, a Portuguese festival, is said to have influenced carnival in Rio de Janeiro. The first carnival dances in Rio took place in 1840, and participants danced the polka and waltzes. It was not until 1917 that the samba was introduced.
Today, the week-long Carnival celebrations in Rio are very famous and attended by millions of people from all over the world, with the parades of the samba schools in the Sambódromo taking center stage.

The African Influences in Carnival

The first carnivals in Italy were generally masked balls with costumes. The tradition quickly spread to other European countries, including Portugal, and led to the emergence of carnival in Brazil. The strong African influence on carnival is because the Portuguese brought slaves from Africa to Brazil. The slaves wore masks and costumes made of feathers, bones, grass, and other elements because they believed in their power to summon the gods and drive away evil spirits. All this is part of the ancient African customs whose traditional decorations are also used in the costumes in today's carnival in Rio.

The introduction of samba and the emergence of samba schools

Since 1917, samba has been associated with Brazilian carnival in the form of music and dance. It originated in West Africa and Angola and was brought to Brazil by slaves who found comfort in this type of music during times of suffering. With the abolition of slavery, many of the slaves settled in places like Cidade Nova and Praça Onze, which became important samba centers. With the increasing popularity of samba, composers, musicians, and dancers began to meet regularly, and clubs and associations were formed. This is how the first samba schools were born. The "Associação das Escolas de Samba da Cidade do Rio de Janeiro" was also founded, organizing the parades of the samba schools at the Rio carnival. "Deixa falar" was Rio's first samba school in 1928. Since then, the samba schools have evolved and their growth and organization resemble the most modern companies with a great infrastructure. All schools have a loyal circle of supporters and are well managed by a defined organizational structure.

The Sambódromo - The Heart of Rio Carnival

Until 1984, Avenida Presidente Vargas, one of Rio's oldest streets, was the place where the samba schools performed. With the growing popularity of carnival, it became necessary to build concrete buildings on both sides of the track in Rua Marquês de Sapucaí. Designed by Oscar Niemeyer, the structure was named Sambódromo and serves as a stage for the parades. Every year, thousands of dancers, singers, and musicians from the samba schools transform Rio carnival into a spectacle of floats, costumes, and drums in the Sambódromo. The presentations are dazzling, and each school has about 75 minutes to show off what they've been doing all year. Carnival Sunday and Monday are considered the two most important days when the twelve best samba schools compete for the title of champion.
Thousands of tourists from all over the world flock to Rio to attend the parades and celebrate in true Brazilian style. What makes the Rio carnival so unique is the fact that the schools present a different theme every year. Also, there are neither the same costumes nor the same staging, which makes this a very entertaining event.

Months of preparation for carnival

Preparations for carnival begin in the samba schools almost a year before the parades. In Rio de Janeiro, there are more than 70 samba schools, all of which perform on stage during the four days of carnival. Each of them has its flag and style, which is reflected in their parade. The preparations can usually be divided into two parts. One is the practice of the so-called baterias, the drum groups, dancers, and other participants, and the other is the making of the floats and costumes, which takes place in "Cidade do Samba", the "City of Samba".

Who and what all belongs to a samba school?

To entertain the audience for 75 minutes requires not only months of preparation, but also several thousand participants. Below we present the most important participants and components of a samba school.

Each parade begins with the performance of the comissão de frente. The commission consists of 10 to 15 dancers or members of the school who are responsible for preparing the spectators and judges for the coming spectacle. In the past, the comissão de frente was formed by older members of the school who carried batons as if to protect the samba school. Over the years, the schools began to invest in professional performers, choreographers, and dancers to enrich the presentation.

The pair of mestre-sala and porta-bandeira is responsible for carrying the flag during the parade, which is one of the most important symbols of the presentation. Originally, the mestre-sala's role was to protect the flag bearer, as it was common among rival associations to steal the rival's flag. The costumes of the couple are traditionally made in the colors of the school, adapted to the theme of the story being portrayed and with luxurious details.

One of the most anticipated moments of the parades, the wing of the baianas is now reserved for the most experienced women of the school. In the early years of the schools, only men performed in this section. The costumes are reminiscent of the old women from Bahia who, in Rio de Janeiro at the beginning of the 20th century, when samba still suffered from prejudice, invited the samba dancers to their homes and let them dance there.

A Bateria - The Drum Group

The heart of the school is the baterias, a group of 250 to 300 percussionists who generate the energy and set the tempo for the group's 75-minute presentation. The bateria usually consists of instruments such as drums of various sizes, rattles, tambourines, cuícas (friction drums), agogôs (impact idiophones), reco-recos, and cymbals. Each school varies this composition, but no wind instruments are used.

He is responsible for the flow of the samba-enredo during the parade and is usually assisted by a group of background singers who march alongside or above the music system just after the bateria.
The popular term puxador assumes that all members of the school must sing the samba during the parade, so the music should only be started or carried by the professionals. Besides the musical interpretation, it is the "voice" of the samba school that must inspire the members and the audience.

As Passistas - The Dancers

This group consists of about 20 young women and men, the best dancers of the samba school, who perform the much talked about samba-no-pé during the presentation. With their mission to enchant and seduce the spectators, the dancers bring a joyful and relaxed atmosphere to the parade and encourage the audience to participate.

A Velha Guarda - The Old Guard

The velha guarda is of great importance for the schools and the preservation of the samba culture. Its members have the task of passing on the history of the samba clubs to the new generation and keeping the traditions of the Brazilian carnival alive. As their name suggests, they are considered the "guardians" of samba. Generally, the velha guarda participates in the parades in a wing that closes the procession, and its most symbolic members are usually on the last float.

The participants in the parade, about 3,500 per school, are divided into several groups, also called alas, each with a clearly defined role. The groups perform the same choreography and wear the same type of costumes that illustrate certain aspects of each theme.

The carnavalesco is usually responsible for the selection of the annual theme. He is responsible for the design and development of the costumes and floats presented by the school. He also supervises rehearsals and is responsible for the artistic direction of the spectacle in collaboration with the school's carnavalesco management.
Professionals from the fields of theater, dance, visual, and performing arts are often encountered. The great carnival artists of Rio carnival, like film directors, are known for their style in the parades and their particular preference for certain themes.

O Samba-Enredo - A Samba Song That Tells a Story

The samba-enredo is one of the most important parts of the parade because it is the musical realization of the theme. It is the soundtrack of the celebration and is meant to spur the participants of the parade to even more enthusiasm. Each samba school defines its samba according to an internal school competition.

For a samba school, the enredo is like the script for a movie. It is the theme that the school will cover in its 75-minute presentation. It must be a story that preferably has a beginning, middle, and end. It can cover historical or critical issues or highlight people, places, and other arts.

As Fantasias - The Costumes

When one thinks of carnival in Rio, the first thing that comes to mind is the creative and original costumes. The most important function of the costumes is to tell the story in a carnival way.

When a samba school starts its parade, it certainly attracts everyone's attention. The so-called alegorias and adereços also play a big role in this.
The alegorias consist of the backdrops that are on the floats, which must be moved by simple means and pushed by the members of the school. The size of the alegorias must not exceed the dimensions of 28 feet (8.50 meters) in width and 32 feet (9.80 meters) in height, as established in the regulation.
The adereços are props that appear on the ground, that is, not arranged on the floats, and usually appear on the heads and hands of the school members. From a distance, they form a beautiful composition of colors and movement, especially when the group moves to the same rhythm with a well-rehearsed choreography.

Fancy experiencing the real carnival in Rio de Janeiro during your next Brazil vacation? No problem! During our 4-day travel package "Experience Carnival in Rio de Janeiro" you will get to know one of the biggest festivals in the world in a small group. Besides excursions to the famous sights, you will explore the street carnival together with a guide and also visit the Sambódromo, where the colorful parades of the samba schools will enchant you.