A Desert in South America? We Show You This Magical Place 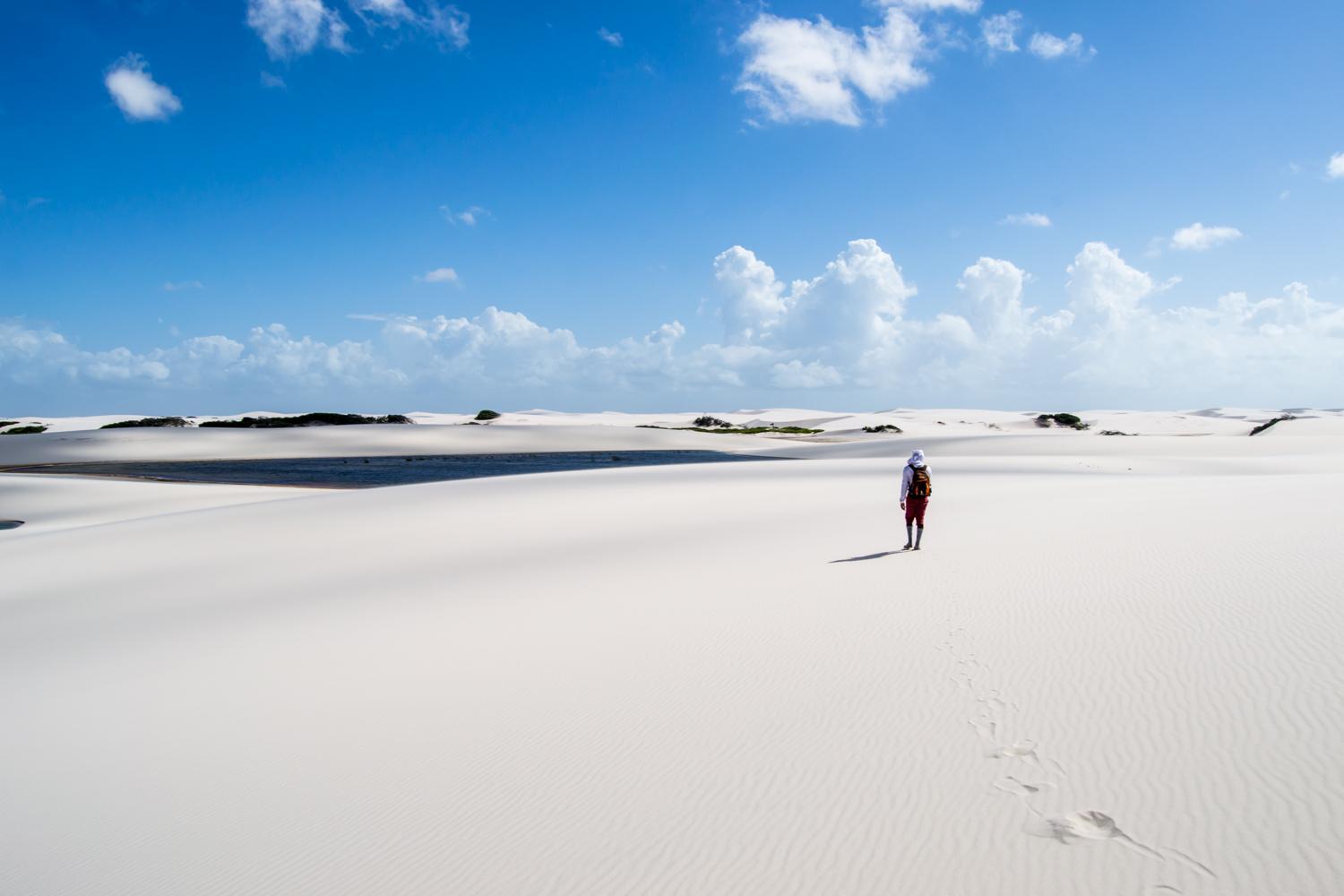 When planning a trip to Brazil, few people will think of visiting the desert. But you should! Because there is a desert-like landscape in Brazil that is worth a short visit. The Lençóis Maranhenses is a desert of water. Translated the name means "sheets of Maranhão". It describes the white dunes, which are interspersed with blue and green lagoons. It is a majestic, almost surreal sight that you should not miss.

In 1981, the Parque Nacional dos Lençóis Maranhenses was founded to protect the ecosystems of the region. The national park covers an area of 383013 acres (155,000 hectares), which is larger than the metropolis of São Paulo. The area is divided into the Big Lençóis and the Small Lençóis. The Preguiças river flows in the middle. Thousands of dunes and lagoons characterize the landscape of this South American desert. From January to June is the rainy season and the freshwater lagoons fill up. Especially in the months of March, April, and May, there is a lot of rainfall. Some lagoons reach a water depth of up to five meters with an extension of up to 1.2 miles (two kilometres). Until the beginning of the next rainy season, the small lakes gradually dry up.

To visit the national park, you first fly to São Luis, the capital of the Brazilian state of Maranhão. From there, a 161 miles-long (260-kilometer-long) road leads to Barreirinhas, the gateway to the Lençóis Maranhenses. It takes about three hours to drive there. The road is in relatively good condition, measured by Brazilian standards. During the rainy season, however, there are many potholes. Be careful, especially in the dark, because cows and horses like to use the road at night.

The little ones and the big ones Lençóis

The Little Lençóis are located east of the Rio Preguiças towards the state of Ceará. The area is, as the name suggests, smaller in area, but no less beautiful than the Great Lençóis. Because of the easier access - a one-hour boat ride - they receive more visitors. In the Small Lençóis, the sand is more yellow and the water darker, creating fascinating color contrast.

The Big Lençóis are located towards the state of Pará, west of the river Preguiças. To reach them, you need to have a four-wheel-drive car at your disposal, which can easily negotiate sand and small watercourses. It is quite common to get stuck at times. Nevertheless, in the end, the destination justifies any difficulty that may arise along the way. You seem to have arrived directly in paradise. Shining white sand as far as the eye can see, only broken by bright blue or deep green lagoons. A sight that lasts a lifetime. This unique desert is constantly changing. Wind and rainfall ensure that new scenarios are constantly emerging. In this way, nature protects itself from human intervention. At best, straw huts can be built in this landscape and they too are buried again and again by the sand masses.

The Lagoa Bonita ("Beautiful Lagoon") is considered by many as the most beautiful of the Lençóis. With a 4x4 car, you have 25 kilometers of road from Barreirinhas in front of your chest. The car overcomes sand and flooded sections on its way to the lagoon. A raft ride is also included. Finally, the visitor climbs up an extremely steep dune on foot. A cord provides support. But the effort is worth it. The Lagoa Bonita is not only beautiful but also well preserved and not overcrowded. In any case, the tour must be done with a guide, otherwise, there is a great danger of getting lost. Either in a private car with a maximum of four people or in jeeps with up to twelve participants. The latter is cheaper but not very back-friendly.

A second excursion destination is the Lagoa Azul ("Blue Lagoon"), about 15 kilometers away from Barreirinhas. A raft, a lot of sand and water are part of the route. Because of the short distance, the visitors are more and more frequent. If you prefer to be in less company, you can walk a bit further to Lagoa do Peixe ("Lagoon of Fish").

A boat trip up the Rio Preguiças is worthwhile to get to know the villages Vassouras, Caburé, Mandacaru, and Atins. The river runs from Barreirinhas to the Atlantic Ocean. Lush vegetation, small arms of the river, and the villages of indigenous Ribeirinhos spread along the river. Tourism, fishing, and handicrafts, made from the wood of the local buriti palm tree, are the livelihood of the locals. Depending on the size of the villages, there are also simple pousadas ("inns") and restaurants that serve freshly caught fish.

Well, did you feel like making a detour to the desert of the Lençóis Maranhenses during your Brazil vacation? The best conditions for this are from June to September. After the end of the rainy season, the lagoons are filled to the brim with water, waiting for your visit in all their glory.