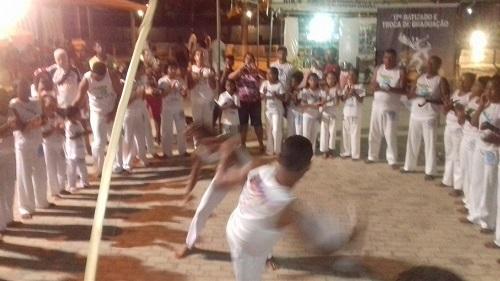 More than just a sport

Soccer is the number one national sport in Brazil. But almost as popular is Capoeira. This fast-paced mixture of dance, fighting techniques, singing and music brings a holistic experience. If you are on a trip to Brazil, you should definitely take the opportunity to try Capoeira yourself. The most important basic steps can already be learned in the course of a day.

Capoeira is an art that combines dance and combat. It was developed by African slaves in Brazil, who were taken to South America by the Portuguese during the colonization. Since the slaves were strictly forbidden to practice a martial art, they were forced to disguise their training. So they mixed exercises with the traditional African dances to improve agility and speed. However, the sport was not always as popular as it is today. Until 1937, it was still considered an inferior tradition of the dark-skinned population and was even forbidden by law. Only after the lifting of this ban the path to today's Capoeira boom was paved.

Aventura do Brasil as well as the Pousada Canto de Imbassaí have already been working together for five years with a school in Imbassaí, in the state of Bahia, supporting a social project. The idea behind the initiative is to create a free offer of Capoeira courses for children and young people. Twice a week training sessions take place in the districts of Barro Branco, Diogo and Areal on the north coast of Bahia. The aim of this cooperation is to get the children off the streets and to offer them a meaningful leisure activity. Capoeira educates body and mind and can mean orientation, support and confidence, especially for children from problem areas. The lessons are perfectly suited to show children and young people the right way to interact with each other and to teach the following values and skills:

The work with the children finds its invaluable value in the exploration of their own personality and the experience of trust and community. Through personal and social education, as well as supporting contributions to schooling, the foundations are laid for an independent and successful life.

This year a total of twenty-five children were able to participate in the annual "Batizado" (belt examination). This examination is a great motivation and only those who regularly attend the training are allowed to participate.
Brazil vacationers who decide to see the project on-site and want to try Capoeira themselves also support the group. Fifty percent of the fees for the participants go directly to the school.

Besides Capoeira, Imbassaí also has a lot to offer for nature lovers. The landscape consists of a jungle-like ambiance on the one hand and beautiful sandy beaches on the other. This makes this place a highlight on every Brazil round trip. The beach Praia de Imbassaí with its numerous coconut palms, dunes, rivers and reefs is one of the most important attractions of this region.