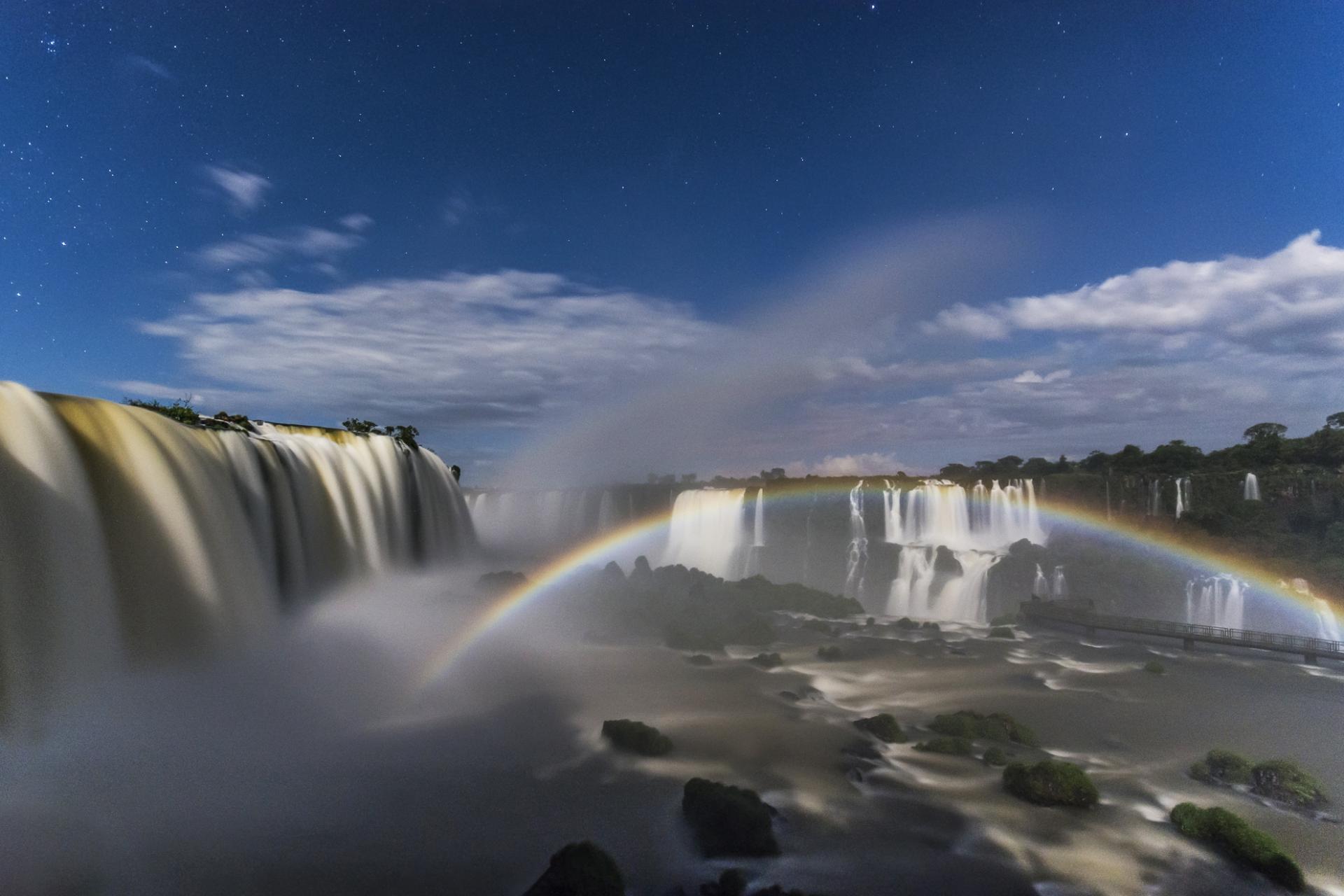 The imposing waterfalls of Foz do Iguaçu in the southern state of Paraná captivate thousands of visitors from all over the world every year. Here, overwhelming masses of water plunge more than 80 meters into the lowlands in hundreds of small cascades over a length of more than 3 kilometers. In a single day, this natural wonder can hardly be comprehended, and so most visitors stay several days to explore the various panoramic and hiking trails. There are also various tours offered on the Brazilian and Argentine sides within the two national parks, boat trips up close to the falls, or even helicopter flights.
But Brazil travelers can discover more than just the waterfalls here in the tri-border area of Brazil, Argentina, and Paraguay. Cultural highlights and historical sites await visitors. Among them are the ruins of the Jesuits, the Itaipú Dam, and the lush nature of the Atlantic Rainforest.

Experience animals and nature around Iguaçu

For nature lovers, the waterfalls usually top the list when visiting Foz do Iguaçu. But the nature and wildlife around this natural paradise are also unique.
The remnant of the original subtropical Atlantic Rainforest is mainly located in the Iguaçu National Park and the floodplains of the Paraná and Iguaçu rivers. Unfortunately, the forest has been severely depleted by intensive agriculture around the area, and many native plants and animals are threatened with extinction.

The Brazilian Iguaçu National Park with about 420,079 acres (170,000 hectares) and the adjacent Iguazú National Park with about 168,031 acres (68,000 hectares) on the Argentinean side form an impressive protected area around the waterfalls. On the hiking and panoramic trails, visitors not only have the best view of the waterfalls but on longer hikes can also swim, enjoy the lush nature, and observe its inhabitants. Ornithologists in particular come from all over the world to marvel at the tropical and colorful birdlife.

The best place for visitors to view the tropical birds, even if not in the wild, is at the bird park near the national park entrance in Brazil. The park is a showcase project worldwide in terms of breeding and species-appropriate husbandry. The bird park's income also supports many environmental protection projects to preserve the animals' natural habitat, the Atlantic Rainforest. On special tours, interested visitors can even visit the inside of the breeding stations.

One of the most impressive structures in the region is the Itaipú hydroelectric power plant dam, which is almost 5 miles (8 kilometers) long and up to 738 feet (225 meters) high. The Itaipú Binacional energy producer is a binational company operated by Brazil and Paraguay in the border section between the two countries, 9.3 miles (15 kilometers) north of the Friendship Bridge.
In the indigenous Tupi-Guarani language, the term "Itaipú" means "stone on which the water rushes" and is composed of the terms "itá", "stone", "i," "water", and "pu", "rush". When completed, it was the largest dam in the world and held that title for 21 years until the Three Gorges Dam was built in China in 2003. The associated reservoir stretches from Foz do Iguaçu in Brazil and Ciudad del Este in Paraguay to Guaíra and Salto del Guairá, 93 miles (150 kilometers) further north.

In addition to electricity generation, tourism is one of Itaipú's business sectors. The hydroelectric plant has become a well-visited tourist magnet in the region, receiving more than one million visitors each year. As a research and innovation center that works closely with universities, the hydroelectric plant is of great importance to the region, as it creates jobs, finances environmental protection and research projects, and is thus one of the most important pillars for the region's economic development. A tour of the plant and the visitor center, which is packed with detailed information, give interested visitors a comprehensive look at the history, technology, challenges associated with construction, and future possibilities of the hydroelectric plant.

Not to be overlooked, of course, are the immense effects on the environment caused by the construction of such a mega-project. Even if the revenues are used to finance conservation projects and a fish ladder is intended to preserve life in the river, the extent and loss of the natural habitat of many animals and plants cannot be dismissed out of hand.
With the closure of the locks and the inauguration of the dam in 1982, approximately 579 square miles (1,500 square kilometers) of forest and farmland were flooded. Moreover, what many of the visitors do not know, the waterfall Sete Quedas also disappeared in the floods, one of the most fascinating natural formations in the world. A few weeks before the flooding, with the help of many volunteers, attempts were made to save the wildlife, and more than 4,500 animals, including monkeys, lizards, porcupines, rodents, spiders, and turtles, were captured. However, a total of 35,000 animals had to be relocated.
Of the surrounding municipalities, Guaíra was the hardest hit due to the loss of the Sete Quedas waterfalls, one of the country's most famous tourist attractions at the time and previously a major source of local revenue. The town received financial compensation until 2016, but the value of such a natural attraction is hard to measure, and to this day residents are fighting for more financial aid.

Brazil's Foz do Iguaçu forms a multicultural border region with Puerto Iguazú in Argentina and Ciudad del Este in Paraguay. The markets in Paraguay are the first port of call for many visitors after crossing the border, as many duty-free goods are offered here. Argentina also awaits visitors with typical food, fairs, and countless shopping opportunities.

The actual border of the three countries lies in the deepest part of the confluence of the Iguaçu and Paraná rivers. On the river banks, all three nations have erected monuments in the form of obelisks painted with their respective national colors. Thanks to the beautiful views, the obelisks are popular places to visit, surrounded by vendors and small stalls selling snacks and souvenirs.
The Brazilian landmark Tres Fronteiras was erected on July 20, 1903, and offers a beautiful view of the rivers and the international bridges.

Experience history up close - Imposing ruins of the Jesuits

But travelers interested in history will not miss out in the region around the waterfalls and can marvel at the Jesuit ruins of San Ignácio and Minas de Wanda. Built-in 1632, the monastery structures then disappeared into the jungle and were not rediscovered until 1897. The structures were built mostly of red sandstone, which contrasts particularly well with the lush greenery of the surrounding area and therefore inspires many photographers. The ruins are considered the best-preserved missionary buildings in Argentina and were declared a World Heritage Site by UNESCO in 1984.
The Jesuit friars also provide valuable evidence of the original culture and language of the indigenous people of the region. With the advance of the Europeans, the indigenous tribes were almost completely displaced, or their members died from the diseases that were introduced. Today, about 10,000 people of three different ethnic groups - Guarani, Kaingang, and Xetá - still live in 17 demarcated indigenous reserves in the state of Paraná.
In everyday life in Foz do Igauçu, the indigenous past is still visible in the names of fruits, animals, traditional foods, and place names. These include such exotic names as Guabiroba, Maracujá, Butiá, Capivara, Jabuti, Biguá, and the communities of Goioerê, Candói, Xambrê, and Verê.

During a Brazil vacation or a round trip in South America, a visit to the waterfalls should not be missing on any list of desired destinations. It is not for nothing that the region is one of the most popular destinations in the world. Thanks to its central location on the vast continent, travelers can quickly reach Foz do Iguaçu by plane or intercity buses. From São Paulo, Rio de Janeiro, or Buenos Aires, for example, a flight takes only 1 to 2 hours, so travelers can visit the waterfalls or one of the other destinations in the region on the same day of arrival. The region is therefore on many travel routes in South America and can be ideally combined with a trip from Brazil to Argentina or Paraguay, Peru, or Bolivia.
Travelers should plan at least three days for their stay to get to know the waterfalls and their surroundings at their leisure.