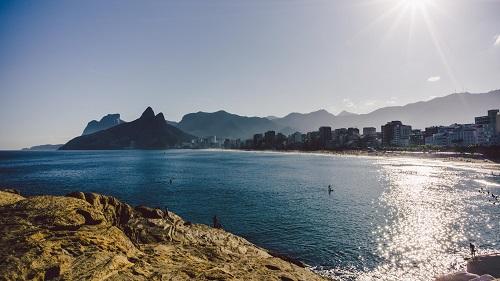 The starting point of a Brazil trip is usually Rio de Janeiro, where life takes place on the beach. The beachgoers like it most active, be it swimming, surfing, or beach volleyball. So it's obvious that Rio is also where the king and queen of beach sports are determined.

Luiz Lima crowned himself the first "Rei do Mar" (King of the Sea) in 2008. The Brazilian swam a distance of 21.7 miles (thirty-five kilometers), from the beaches of Leme to Pontal. Lima thus laid the foundation for the "Rei do Mar" competition, which had its premiere in Rio in 2009. Until today it has become the biggest beach sports event in Brazil, now called "Rei e Rainha do Mar" (RRM: King and Queen of the Sea). The competition runs in two categories: the Desafio (challenge) for professionals and the Travessia (crossing) for amateurs. The venue was initially the Copacabana beach.

Since 2010 the event takes place three times a year, in March, September, and December, and also a queen is sought next to the king. A new highlight in December is the Desafio Elite (the challenge of the best), in which stars of international swimming participate.
The Institut Faz Esporte (Mach' Sport) and the initiator Luiz Lima took over the professional organization of the spectacle in 2011. In the following years, some disciplines and the beaches Leblon and Arpoador were added to the program. Thus, the "Rei e Rainha do Mar" Beach Sports Festival 2012 officially became the biggest of its kind in Brazil. With over ten thousand participants, this top position was consolidated in 2013. The professional swimmers also had the opportunity to test the Olympic Games competition site for marathon swimmers.

In 2014, the steadily growing number of participants came from twenty-two Brazilian states. This year, the event gained new venues: Florianopolis in October and Fortaleza in November.
The following disciplines will be staged (as of the second stage on September 27, 2015):

As the only representative of South America, the RRM is part of the World Open Waters Swimming Series (WOWSS), a series of the thirteen best open water swimming competitions in the world. The organizers use the competition's popularity to promote social and environmental projects:

Even if you don't have any ambitions to become a king, you can make your Brazil vacation sporty. The whole country offers excellent conditions for active vacations!