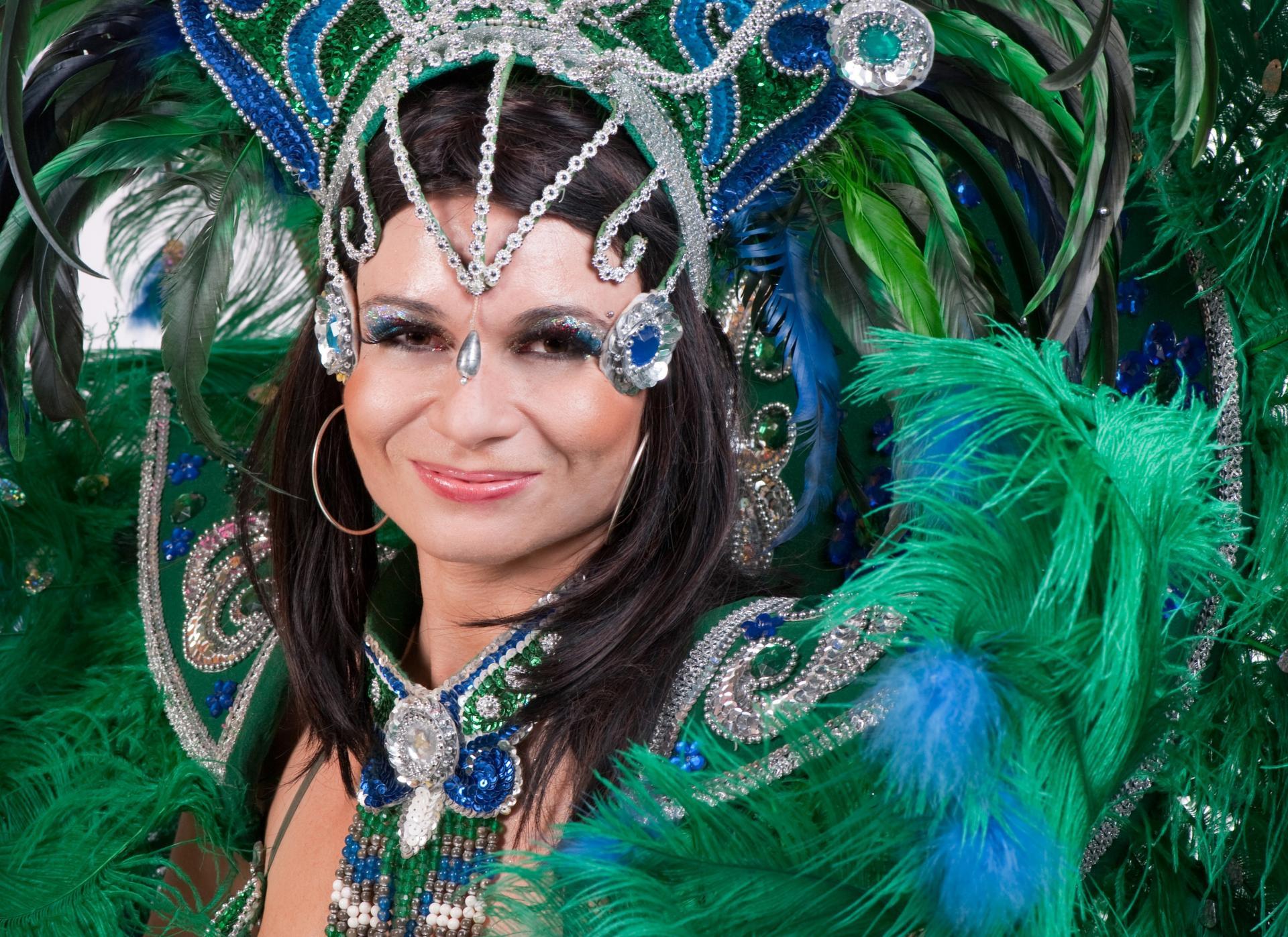 Colorful costumes as an expression of the joy of life

A trip to Brazil always lives from encounters with the joyful locals. A reflection of the Brazilian joie de vivre are the colorful costumes that are used at festivals, dances, or in everyday life. Today we would like to present characteristic Brazilian costumes and look at the occasions for which they are worn.

The Carnaval is the largest popular festival in Brazil and is known beyond the country's borders. Especially the parades in the Sambadrom of Rio de Janeiro, which are decorated with colorful costumes, always attract countless visitors from home and abroad. Various fabrics, elaborate and expensive ornaments, sequins, and gemstones are used in the costume design of the samba schools. Year after year they invest a small fortune in the staging of their samba show and spend months of meticulous preparation. In addition to the dance training, a harmonious costume design contributes decisively to their success. At the beginning there is the choice of a theme, this is Samba enredo, the Samba with a plot. The task of the costume is to depict the story told in the music. Each samba school creates a sophisticated concept so that all the individual costumes harmonize with each other. During the parades the schools enter the samba in blocks, the so-called "alas". Each block has its sub-theme in relation to the clothing. As a whole, shoes, socks, shorts, bikinis, hats, colors used and decorative elements of a samba school should form a unity. The judges will also evaluate the creativity, the successful realization of the musical theme, the quality of the materials used and the sewing, the interplay of colors, the detailed decorations, and the fit of the costumes. The smallest detail can make a difference. The most important costumes are those of the schoolmaster Mestre Sala, the flag bearer Porta Bandeira and the members of the front block, who make the first and therefore most important impression on the jury and the audience.
It never gets boring, because the Carnival in Rio produces new and dazzling Brazilian costumes every year.

In some dances of the Brazilian Northeast, the actors dress impressively colorful.
From Pernambuco comes the Maracatu, marching music with African roots, based on percussion. The marchers wear brightly colored Brazilian costumes. Wide flared hoop skirts with frills, tinsel and pearls are a trademark of the Maracatu, as are the hats decorated with long, hair-like threads. Men often put on a wooden scaffolding covered by a cape and hold lances larded with colorful ribbons in their hands.
The Frevo is also native to Pernambuco. The dancers dress in colorful costumes and swirl small umbrellas in rainbow colors through the air. The men use simple, tight-fitting shirts and pants and the women bikini tops and ruched miniskirts. The fast Frevo was specially designed for the carnival in Recife and the dancers are jumping wildly up and down, just like the wild patterns of their clothes.
A music style from the north of Brazil with indigenous origin is the Carimbó, which over time was also influenced by Brazilians of African origin. They dance barefoot and in colorful clothes printed with flowers. Women wear long, wide skirts and roses or camellias in their hair, as well as bracelets made of seed capsules. Men wear short white pants and open floral shirts, which they knot at the waist. The pants are turned up at the hem, an inheritance of the African slaves who were employed as crab fishermen in the mangroves and collected the crabs in the hem of their pants.
The folklore festival "Bumba meu Boi" (English "Stand up, my ox") is an annual highlight in the northern Brazilian states. It is based on the legend of a revived ox, which is recounted during the festivities. The costumes representing Indians, slaves, patron, and so on, consisting of feathers and typical historical clothing. The oxen as the main characters stand out. Besides, people put on colorful masks in the form of cow heads, richly decorated with sequins and colorful stones. Even real cattle are hung with splendid coats for the feast.
All over Brazil, the Festas Juninas are celebrated in June, which focus on rural culture and campfire romance. The costumes correspond to this. Men wear plaid shirts, straw hats, and jeans with colorful patches of fabric. Women wear flared dresses or skirts with checkerboard patterns and straw hats or flowers in their hair, which is braided into one or two plaits.

The clothing of the baianas

Baianas are figureheads of Brazilian culture and their clothing embodies an important tradition in Bahia. Their Brazilian costumes are women's clothing for followers of the Afro-Brazilian religion Candomblé. They come in various forms, depending on the occasion and region. Characteristic are the partly balloon-like hoop skirt axó and the tied cloth around the head.
The simplest baiana ensemble, which is practical in everyday life, consists of the headscarf, a shirt with decorated lace, and a skirt with few hoops under which a bermuda is worn. This allows them to sit on the floor in any situation. The position of the respective baiana in Candomblé and the social occasion determine the color and fabric of their clothing as well as the decorations.
The Baiana do Acarajé from Salvador da Bahia is one of the most famous personalities in Brazilian society. They are often mothers or daughters of respected Candomblé people, who sell Bahian specialties as street vendors such as Acarajé a fried bean burger. These women wear the religious pearl necklaces fio de contas. Their clothing is either simple or pompous, as described below.
At cultural or touristic events, the Baianas de eventos turísticos represent their state of Bahia and the African roots of Brazil. Their Brazilian costumes are colorful, folkloric, and pompous, the skirts are extremely flared, the shirts are elaborately decorated and the headdress is large and artfully bound. The carnival parades in the Sambadrom of Rio are a typical scene of this dress style because every samba school always shows an Ala das Baianas. The exhibited skirts of the Maracatu are also inspired by this magnificently decorated baianas.

A figure with a Brazilian baiana costume, available in all sizes and shapes, is an authentic and very popular souvenir from the Brazil vacation.