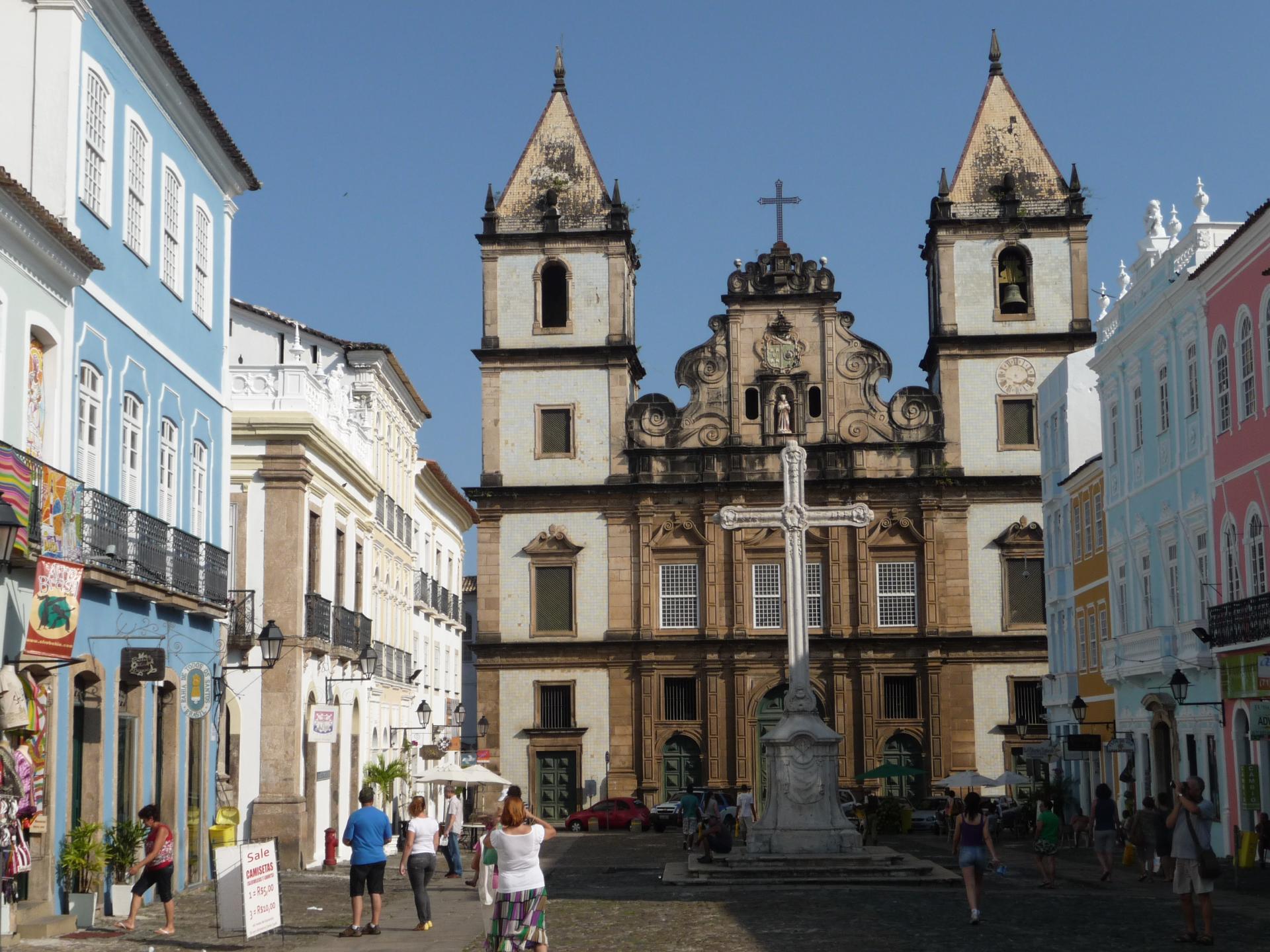 Founded in 1549 by the Portuguese Tomé de Souza, Salvador was one of the first colonial cities in the New World and became Brazil's first capital. The jewel is located in the northeast on All Saints' Bay, which owes its name to Amerigo Vespucci, who landed here on All Saints' Day in 1501 and named the bay after the day he landed. Today, the city has about 2.9 million inhabitants and is still marked by its colonial heritage. Anyone taking a Brazil trip should not miss the multifaceted Salvador. The lively culture of the Afro-Brazilians is omnipresent and reflected in the art, music, food, and vibrant lifestyle. Every day, rhythmic drums resound in the streets and spicy aromas of the regional cuisine are carried through the air. In addition to processions for African gods and mystical ceremonies, more than 300 churches, fortresses from the 16th and 17th century, palaces, and luxury villas bear witness to history.

A steep cliff divides the city into two halves: the Cidade Alta, "Upper City", and the Cidade Baixa, "Lower City." The two parts of the city are connected by an elevator and the Plano-Inclinado cable car. In 1985, the Cidade Alta and the historic center Pelourinho were declared a World Heritage Site by UNESCO!

The "ponto zero" is situated on a rocky hilltop, where it all began – Praça Tomé de Souza. The founder of the city had the first houses built on this square and the city began to develop. Also called Praça Municipal, this is the site of the City Hall and the Palácio Rio Branco, the seat of the Governor General. The square offers a wonderful view over the bay and the Lower City, which is reached via the historic elevator Elevador Lacerda. 236 feet (72 meters) of altitude separate the two parts of the city!
From Praça Tomé de Souza you can get to Praça da Sé through Rua Misericordia. Here are the Archbishop's Palace and the 17th century Igreja da Misericordia. Especially single young women, widows, and orphans found shelter in this church to be protected from assault.

Another central square with magnificent buildings is the Terreiro de Jesus, where some baianas, women from Bahia in traditional dresses, are waiting to be photographed for a small donation. There are also snack stands that offer local delicacies, such as acarajé. The deep-fried meat and vegetable balls are a delicious snack during a city tour and probably the most typical street food in all of Bahia. From here, you don’t have to go far to the historic Pelourinho district. Largo do Pelourinho, which means "Square of the Pillory", was once the largest slave market in Salvador. Today, quaint eateries, charming boutiques, and beautiful restaurants serving Afro-Brazilian cuisine line up here. From March to December, on Tuesday and Saturday evenings, the drummers of the Olodum group show their skills on Largo Tereza Batista. That's when people perform and dance in the streets and music resounds everywhere. If you can schedule it, be sure to catch a performance! It is an unforgettable experience.

The Cidade Baixa is dominated by the port and industrial plants. Despite this, there are also attractions worth seeing here. One of the most interesting is the Mercado Modelo, a market for handicrafts with more than 250 stores. If you are looking for a nice souvenir from your vacation in Brazil, you will surely find it here. In addition, the market is located directly on the All Saint's Bay, so you have a fantastic view of the sea while shopping.

Also of particular importance is the Igreja de Nosso Senhor do Bonfim. The church owes its origin and name to the vow of a sailor who promised to endow a church, if his voyage through the stormy sea would have a good end. Now, every year in January, the famous Sailors' Festival is held here, celebrating the highly respected Senhor do Bonfim. Today, the church is the most important pilgrimage church of Salvador and a place of worship for Catholics as well as for followers of candomblé.

Also worth seeing is the Solar do Unhão, a former sugar transshipment point from the slave era. The 18th century complex consists of a main house, a chapel, the former quarters of the slaves, and a warehouse. The sugar cane grown in the region around the Bay of All Saints and processed there was exported from here to the world. Today, the complex houses a museum with exhibitions of famous Brazilian painters such as Portinari or Di Cavalcanti.

Lastly, there is a holiday tip from us. On the last day of November begin the festivities for the Immaculate Conception on December 08. During this time, visitors can enjoy Bahian cuisine in roadside kitchens and admire capoeira dancers at Praça Visconde de Cayru. Not to mention Carnival, there are many other celebrations and commemorations that are extensively celebrated in Salvador besides this festival.

So, if you don't want to miss the Afro-Brazilian lifestyle and the colorful culture, you should definitely pay a visit to Salvador during your Brazil vacation! The mixture of delicious food, unique traditions, and a special charm enchants everyone who comes to Bahia.