Festa do Senhor do Bonfim in Salvador 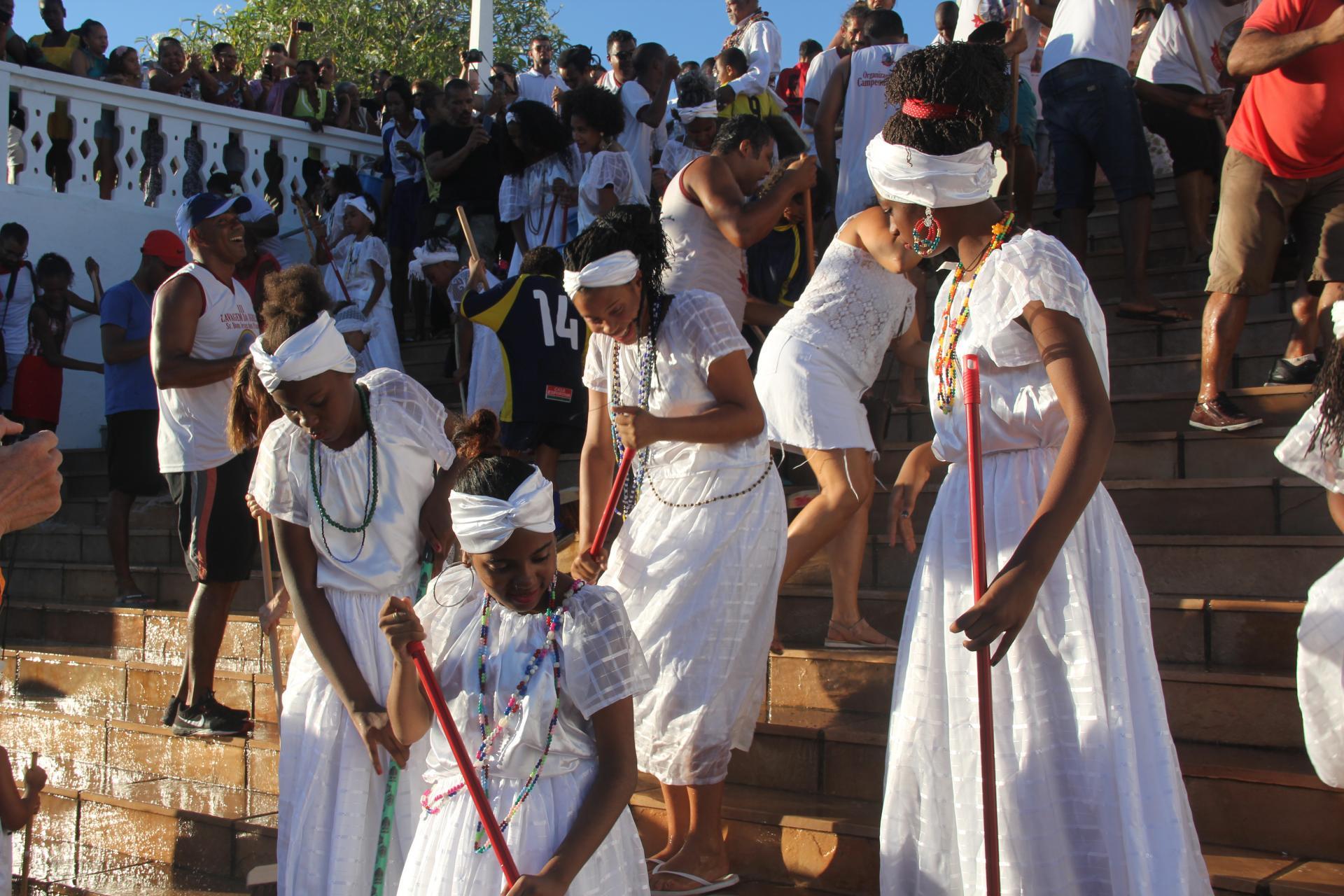 Where did the Senhor do Bonfim tradition originate?

How did the Senhor do Bonfim come to Brazil?

The cult of the Senhor do Bonfim came to Brazil in the mid-18th century through the Portuguese naval captain Theodósio Rodrigues de Faria. He owned three slave ships with which the slaves were brought from Africa to Brazil. During a heavy storm at sea, Theodósio promised that if he survived the storm, he would single-handedly bring a statue of the Senhor do Bonfim and Nossa Senhora da Guia to Brazil.

When was the Bonfim Church founded?

Where does the tradition of the fitas come from?

One of the most famous traditions of the Festa do Senhor is to give another person a so-called fita, a colored cloth ribbon. According to tradition, it must be placed on the wrist. Each fita represents a request with which one silently addresses the Senhor. Normally, the fitas are attached to the wrist with three knots and, according to tradition, the wishes are only fulfilled when the cloth ribbon comes off the wrist by itself.
Since the year 1809, the custom of the fitas belongs to the Festa do Senhor do Bonfim. They were introduced by Manoel Antônio da Silva Servo, who was treasurer at the time and was looking for a way to increase revenue. At that time, the fitas were still called medida (" means ") and had the same length as the right arm of the Senhor do Bonfim. Therefore, the traditional fitas of the 19th century had a length of up to 50 centimeters. They were made of cotton and used as decoration or bookmarks.
Nowadays, fitas are made of polyester and are much shorter. The fitas do Senhor do Bonfim are an expression of religious syncretism, the fusion of Catholicism with Afro-Brazilian candomblé. Their colors can also be associated with orixás, deities from Afro-Brazilian candomblé.

How did the Lavagem da Igreja do Bonfim come about?

There is little accurate information about the origin of the Lavagem do Bonfim. Historians do not agree on exactly when this tradition began. It is believed that it was at the beginning of the 19th century. According to one legend, this tradition was introduced by a Portuguese who was very grateful to the Senhor do Bonfim for having survived the Paraguay War. According to another legend, this custom was started by the believers of the candomblé. A third hypothesis claims that the washing of the steps began with the dance of São Gonçalo, a dance of religious origin, which took place in the Igreja do Bonfim. It is said that the faithful of São Gonçalo washed the steps of the Igreja do Bonfim before each dance. Another theory is that the first washing was done by slaves, in preparation for the upcoming Festa do Senhor do Bonfim. As the faithful of Afro-Brazilian religions began to identify with the Senhor do Bonfim, the washing inside the church was banned by the Archdiocese of Salvador. However, the ritual of washing the steps in front of the church has been preserved until today.

The course of the procession

The celebrations begin in front of the Igreja da Conceição da Praia with an ecumenical service at 8 am. The different groups that participate in the procession move individually towards the Igreja do Bonfim. The procession is also attended by believers of other religions, such as candomblé. Thus, during the procession, you can admire many traditional garments.
The famous baianas leave right after the ecumenical service. Once they arrive at the Colina Sagrada, they begin to wash the steps of the church with aromatized water. In the late morning, another service is celebrated in front of the Igreja do Senhor do Bonfim.
On the approximately 8 kilometer route from the Igreja da Conceição da Praia to the Igreja do Senhor do Bonfim, one passes many tourist attractions. First at the Igreja da Conceição da Praia, which was built in the 17th century in Gothic style. A little later at the Elevador Lacerda, which connects the Cidade Baixa with the Cidade Alta ("Upper Town"). The elevator got its name in honor of Augusto Frederico de Lacerda, who built the elevator in the 19th century. On the opposite side is the Mercado Modelo, with more than 300 stores selling local handicrafts and souvenirs for your Brazil trip.
Just past Avenida Jequitaia is the Mercado do Ouro, built toward the end of the 19th century. Still on the same street are the Museu du Ritmo and the Trapiche Barnabé audiovisual center. Once in the Calçada district, on the left, you will find the Feira de São Joaquim, one of the most original markets in the city. On the right side is the Igreja dos Órfãos de São Joaquim. Continuing along the street, in Largo de Roma, you will come across the Obras Sociais Irmã Dulce, the "Social Services Sister Dulce". From here it is only a few meters before you reach the Colina Sagrada.

The Corrida Sagrada ("Holy Race") has been taking place for more than 30 years and is organized by the Bahian Athletic Federation. The participants start at 7 a.m. in front of the Igreja da Conceição da Praia and race through the streets of the Cidade Baixa. The Corrida Sagrada or Corrida do Bonfim as it is popularly known, is one of the most famous, exuberant, and traditional street races in Salvador.