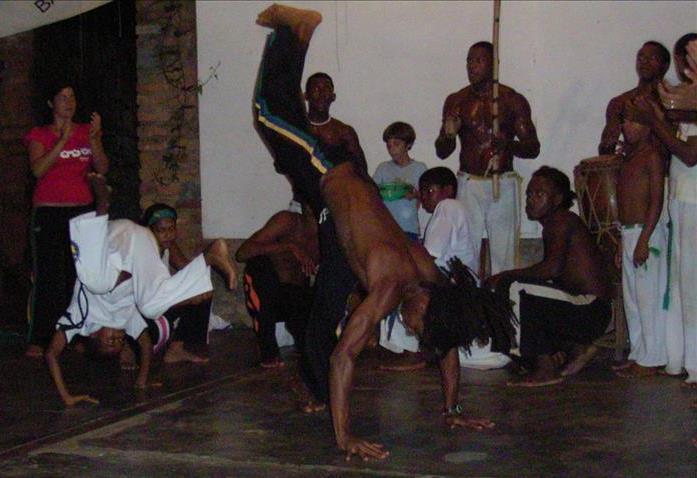 Besides soccer, carnival and samba, there is another passion that the Brazilians have probably been born with: Capoeira. This mix of aesthetic martial arts, self-defense, and dance with African roots reflects the cultural richness of Brazil and is therefore a special highlight for many vacationers on a trip to Brazil.

The history of Capoeira goes back to the 18th century. During the colonial period, the martial art was developed for defense by slaves abducted from Africa. Since it was considered forbidden to learn self-defense at that time, the martial art was camouflaged by dancing movements. Whoever is on vacation in Brazil and in search of versatility will be enthusiastic about Capoeira. It combines acrobatics, rhythm, martial arts, reaction, improvisation, and creativity. This martial art forms an important part of the colonial heritage of Bahia, which Brazilian travelers can experience firsthand on a tour through Salvador.

The martial art is especially characterized by three elements: the fight, the music, and the "roda" (Portuguese for "circle"). The fight, which is often called a game, takes place within the roda. The roda, the circle, forms the social framework in which the fight takes place. The tone is set by the music, which is accompanied by various traditional instruments. A curved wooden stick with wire strings, called berimbau, determines the rhythm and thereby also the events within the roda. The melody is accompanied by Portuguese texts, whose roots go back to the times of slavery. In a later phase of development, Capoeira became an urban phenomenon and was considered a kind of street fighting technique in Brazil. This form was especially found in the port cities of Salvador da Bahia, Rio de Janeiro, and Recife. Generally, Salvador da Bahia is considered the birthplace of Capoeira. However, one can admire the impressive movement sequences all over Brazil, for example at different Brazil round trips or also at the picturesque beaches of the island Florianopolis in the south of the country, where Capoeira performances fascinate vacationers on a Brazil journey.

In 2003 the UNESCO adopted the Convention for the Preservation of the Intangible Cultural Heritage. The list of intangible cultural heritage includes diverse cultural expressions from all world religions. These forms are decisively based on human knowledge and ability and are also an expression of inventiveness and creativity. They are passed on from generation to generation and are therefore constantly being redesigned. They include dance, music, theater, customs, festivals, crafts, and oral traditions. The Brazilian martial art has now been included in the UNESCO list of intangible cultural heritage. Brazilian travelers can experience this martial art up close during a day tour with city sightseeing and a visit to a Capoeira school in Salvador. For active travelers, Salvador also offers a 3-day tour, during which the city can be explored on a bicycle during the Brazil vacation.

Nowadays there are two main directions of Capoeira: The traditional "Capoeira Angola" and the modern "Capoeira Regional". The aesthetic martial art from Brazil is now spread all over the world and can often be seen in movies, advertisements, or computer games. Capoeiristas for example accompany the music video "Maria Maria" by Carlos Santana and also in the US movie "Ocean's 12" there is a scene with a Capoeira performance. Want to see more? If you want to follow the rhythmic movements of Capoeira not only on the screen but dive directly into the action on your next vacation, it is recommended to visit the northeast and especially Salvador da Bahia on a trip to Brazil. If you want to explore this fascinating region on your own, you can get to know the country and its people on a rental car tour along the northeast coast and experience an authentic Brazil.