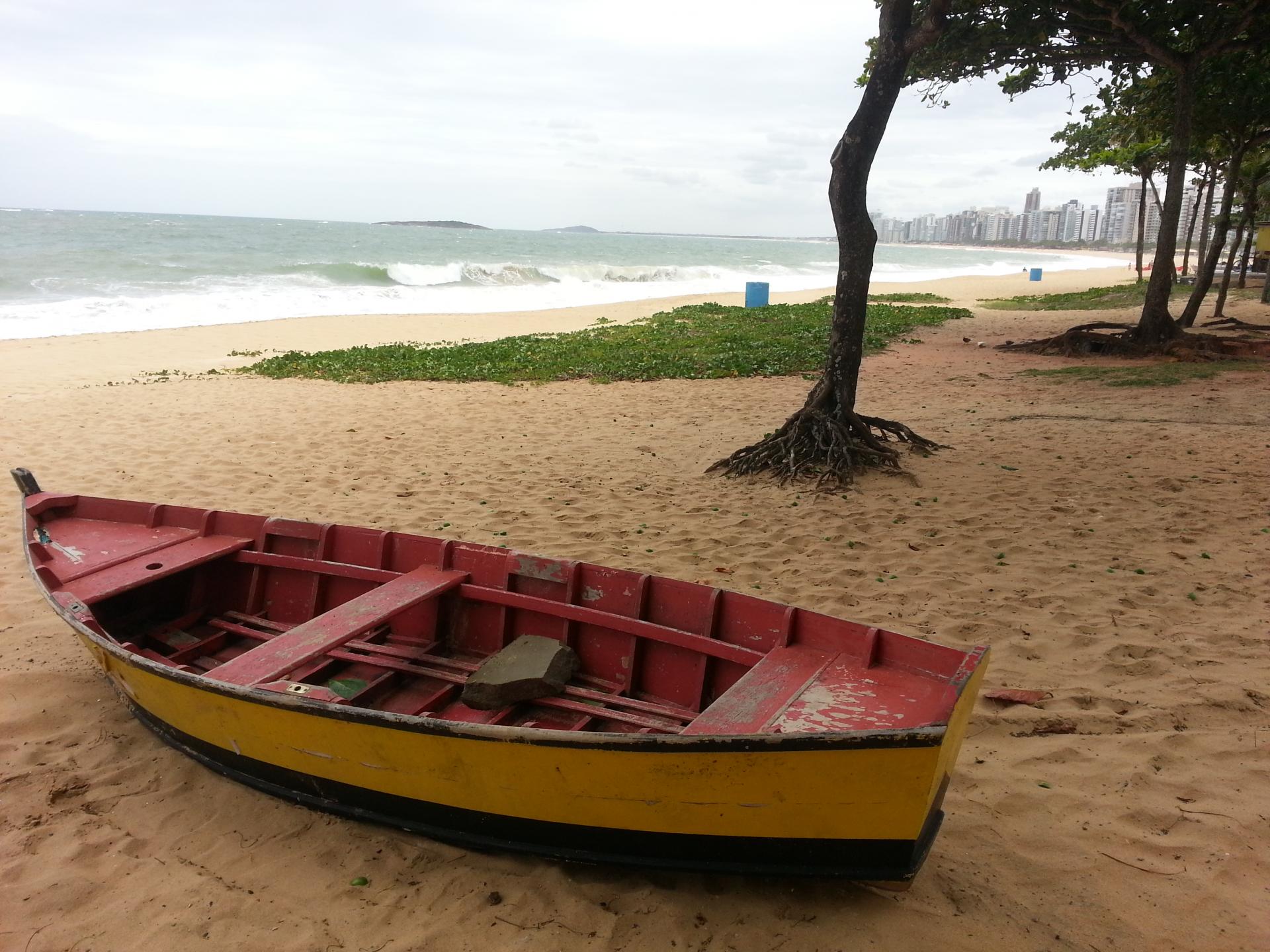 Espírito Santo is a Brazilian state that offers beautiful landscapes along the coast and inland. Tropical beaches and impressive mountains are within a short distance of each other.
The state is about 74.5 miles (120 kilometers) wide and 224 miles (360 kilometers) long, with a rugged coastline of about 248.5 miles (400 kilometers) and 73 islands. The capital city of Vitória is also located on one of these islands. The state of the capixabas, as the inhabitants are also called, offers a lot of variety during a Brazil trip thanks to beautiful beaches, impressive mountains, and interesting cities.

But why are the inhabitants called capixabas? Researchers have found that capixaba means "roca" in the Tupi language. This term refers to a field or clean land for planting, and the Indians who lived primarily on Vitória Island used to call their corn and cassava plantations capixabas.
Over time, people from outside the island began to use the term capixaba to refer to the Indians of the island. This term became more and more popular and eventually everyone born in Espírito Santo was referred to as capixabas.

Vitória - One of the most livable cities in Brazil

Vitória, one of the oldest cities in Brazil, was founded in 1551 and is considered one of the most livable cities in the country. Most of the city is located on an island. The cities of Vila Velha, Cariacica, and Serra border the capital on the land side, forming the vast metropolitan region known as Grande Vitória. Vitória boosts business tourism thanks to its good economy and infrastructure, but it also has beautiful beaches and exciting historical sites.

If you are more interested in historical and cultural sights, you should take a look at the historical buildings in the city. In the Cidade Alta district, you can visit places like the Palácio Anchieta, the Catedral Metropolitana de Vitória, the São Francisco Monastery, and the Teatro Carlos Gomes, designed in the style of the Teatro alla Scala in Milan.

The neighbor of the capital Vitória, Vila Velha, is also a popular destination in Espírito Santo. The sea is one of the main attractions of the city. There are several options for spending the day relaxing on the sand. Praia do Costa beach is one of the main beaches, with several kiosks, restaurants, and exciting nightlife. Praia da Sereia, with its calmer waters, is ideal for family trips. The choppy sea at Barra do Jacu beach and the great atmosphere, attract many surfers. Itaparica beach with clear water is also a good choice.

If you can't stand being on the beach all day, you can take a tour of the city to see the most famous monuments and buildings. A visit to the famous chocolate factory Garoto is also highly recommended. The postcard motif of Vila Velha is the monastery of Nossa Senhora da Penha, which stands on a cliff 512 feet (156 meters) above sea level and overlooks the two towns. The monastery is one of the oldest religious sanctuaries in Brazil and has a very interesting history of its origin. Brother Pedro Palácios lived in a cave at the foot of the monastery hill, where an image of Nossa Senhora da Penha, the saint who gave the place its name, was kept. Three times the image disappeared and each time it was found again on the hill. Thus, it was finally decided that the monastery should be built on the hill. The locals' joke that the saint wanted to enjoy the wonderful view of the two towns of Vila Velha and Vitória.

Peaks and waterfalls - Off to the countryside

The Pedra Azul National Park is located in the municipality of Domingos Martins, in the mountainous region of Espírito Santo. Only 31 miles (50 kilometers) from Vitória are the 3,064 acres (1,240 hectares) of the national park, a portion of which is open to the public. The main attraction of the park is the famous Pedra Azul, the "Blue Rock," a 5,978-feet-high (1,822 meter) rock formation that acquires more than 36 different shades of color during the day due to the sun's rays. Next to it is the equally famous Pedra do Lagarto, the "Lizard Rock", which recalls the shape of a lizard climbing the rock.

Caparaó National Park is located on the border between Minas Gerais and Espírito Santo. In the national park, besides great hiking trails, you can also find waterfalls and natural pools that are perfect for a refreshing swim. The most famous attraction of Caparaó National Park is Pico da Bandeira, which attracts thousands of tourists every year who want to climb the third highest mountain in Brazil with its 9,488 feet (2,892 meters). The way to the top is quite strenuous, but you will be rewarded with an incredible view of lush nature. Mountain formations and beautiful waterfalls await you. A very special experience is to enjoy the sunrise on the top of Pico da Bandeira.

Only 56 miles (90 kilometers) from Vitória, in the town of Alfredo Chaves, is the district of Matilde and the famous waterfall that bears the same name. The path to the waterfall is completely asphalted, with an access footbridge through a piece of protected forest. Upon arrival, the imposing waterfall impresses, with its 227 feet (70 meters), one of the largest waterfalls in the state. Although there is no access for bathing, the bravest use the rocky walls to practice rappelling. In front of the waterfall, a small river forms a kind of freshwater beach, also known as "prainha", in English "small beach". Besides the waterfall and the small beach, you can also visit the Matilde train station, the enchanted tunnel, a great viewpoint over the valley, as well as other waterfalls on the same circular trail, the Caminho das Águas.

Espírito Santo is also the place where the famous clay pots called "Paneleiras de Goiabeiras" are made. These clay pots have a long tradition, which you can still see when you visit the potters' association of Goiabeiras. The artisans who make the traditional pots are called paneleiras. The clay pots are shaped by hand and burned in the fire. In this process, the technique used today is very similar to the one used by the Indians many years ago. The craft passed down from generation to generation, used to be practiced at home. Today, most of the artisans work in the "Associação das Paneleiras de Goiabeiras", the potters' association, where you can follow the production process and also buy a handmade pot. The potters' association became a tourist attraction and the activity was declared "Intangible Cultural Heritage of Espírito Santo".

The state was settled by indigenous people, Africans, Portuguese, and other European immigrants. All the inhabitants influenced the gastronomy and so new dishes were always added to the typical cuisine of the capixabas. Today, moqueca and torta capixaba are among the typical dishes of Espírito Santo.

On the road in Espírito Santo

Brazil vacationers can find a lot of variety in Espírito Santo. Be it hiking through a national park, relaxing hours on the beach, or city tours through the towns of Vitória or Vila Velha.

Great beaches can also be found in Guarapari, one of the main destinations on the Capixaba Coast. With dozens of incredible beaches, Guarapari is a popular vacation spot, especially in the summer. But besides the more than 50 beaches, there are other interesting activities in Guarapari, such as a hike to the viewpoints of Pedra do Elefante and Pedra do Ipiranga.

To the north, on the border with the state of Bahia, is Itaúnas, a quiet and cozy place with dunes that are 98 feet (30 meters) high and its famous Forró Pé de Serra. The original village of Itaúnas was buried by the masses of sand over time, and for many years the only trace of its existence was the cross of the small church that emerged from the dunes of Itaúnas.