Festivals in Brazil – The Sairé in Alter do Chão 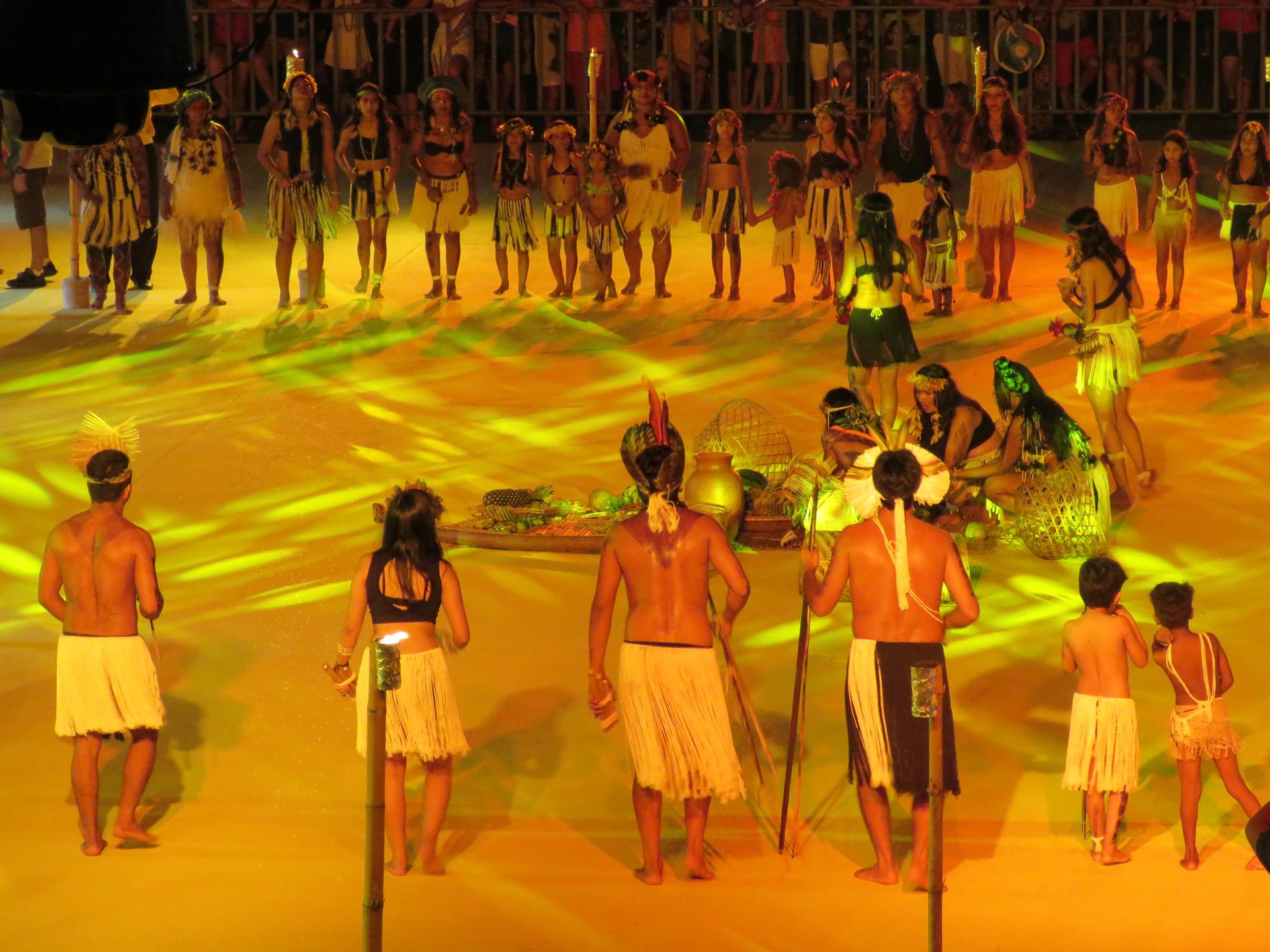 The Amazon region around the Tapajós River in the state of Pará attracts Brazilian travelers with pristine nature, dense rainforest, and seemingly endless white sandy beaches. In September, this idyllic tranquility is over for a few days, and the Sairé in Alter do Chão is celebrated colorfully and loudly. If you want to experience a cultural highlight on a trip to Brazil and are not afraid of debauched festivities, this is the place to be.
The four-day festival is a true mix of cultures, full of symbolism and influences from Portuguese and indigenous traditions. Indigenous dances and ceremonies, Catholic Church processions and carimbó dance contests line up. The village square is transformed into a festival area. Rows of stalls made of palm fronds are set up, offering handicrafts and traditional foods such as tacacá and vatapá.
The hub of the Sairé is the large dance arena, where a competition is held between the pink and gray dolphin dance groups. Thousands of spectators watch the event on the stands for hours, cheering on the dancers and performers who perform the legend of the river dolphin with huge setups, stage scenery, and lighting effects.

European and indigenous origins of the Sairé - mix of cultures

It is believed that the festival is already over 300 years old and can be traced back to Jesuit missionaries. The goals of the missionaries at that time were acculturation, that is, the assimilation of the indigenous population to the cultural values of Europe, and the introduction of the Catholic religion. The Sairé festival was simply a procession held in several towns in the Amazon. At the end of the procession, prayers and a festive dinner were held. Gradually, some ceremonies of the indigenous population were adopted to make the festival more understandable and comprehensible.
Today, the Sairé is a mix of folklore, indigenous traditions, and Catholic processions, but above all a gathering of the inhabitants of the surrounding village communities and indigenous tribes, such as the Boari and the Munduruku.
The symbol of the Sairé is a semicircle of twisted vines surrounded by cotton, flowers, colorful ribbons, and religious motifs, reminiscent of a Portuguese coat of arms. The flag is carried by a woman named Sairapora and placed on the main beach of Alter do Chão on the days of the Sairé.

The Sairé festival begins on Thursdays and is celebrated with festivities and folkloric dances that bring to life typical Amazon legends. The story of the freshwater dolphin that transforms into a handsome man, seduces women, and impregnates them, takes a central role. On the last day, there is the "sweep of the festival", the "marabaixo", the "quebra macaxeira", the dismantling of the decorated festival poles, and the "cecuiara", a so-called fraternization meal among the inhabitants.
The Sairé attracts thousands of visitors every year and is therefore naturally economically very important for the region. Pará is considered the poorest state in Brazil. The people live on a very low salary and have hardly any possibilities to increase their income. Tourism, therefore, offers many opportunities, since apart from the impressive nature there is no lack of cultural attractions. These include the historic center and traditional markets in Santarém and the rock paintings in the nearby state park of Monte Alegre.

One of the highlights of the Sairé is the contest, which is about the dispute between the pink and the gray dolphins. The legend of the dolphins is about the seduction, death, and resurrection of the characters of Princess Cunhantã-iborari, queen of the Sairé, Tuxaua, the shaman, and the fishermen. According to the legend, the dolphin transforms at night, rises from the river as a young man, and seduces the daughter of the Tuxaua, who then becomes pregnant. Out of anger, the Tuxaua gives the order to kill the dolphin man, whereupon, however, the wrath of the evil spirits falls upon him. At the request of the Tuxaua, the shaman then brings the dolphin back to life.
The "Festival of the Boto", as the river dolphins are called in Portuguese, was only integrated into the Sairé in the 1970s and is reminiscent of the "Festival of the Oxen" in Parintins in the state of Amazonas.

Experience the Sairé at Tapajós - Journey to the Caribbean of Amazonia

The venue of the Sairé is located about 30 kilometers from Santarém in the small fishing village of Alter do Chão. Here lies the estuary of the Tapajós into the Amazon. The clear water of the Tapajós, the sandy beaches, and especially the adjacent national forest FLONA, Floresta Nacional do Tapajós, which is home to one of the largest biodiversities of the Amazon and impressive giant trees of the Mata Terra Firme, make Alter do Chão a very special destination in Brazil, not only for the Sairé. Due to its shallow waters and white sands, the place has been nicknamed the "Caribbean of Amazonia".
On a Brazil vacation, travelers can combine a visit to this impressive area with a trip along the Amazon River from Belém to Manaus, for example. Santarém is also easily accessible via direct flights from Fortaleza, Belém, Manaus, or Brasília.