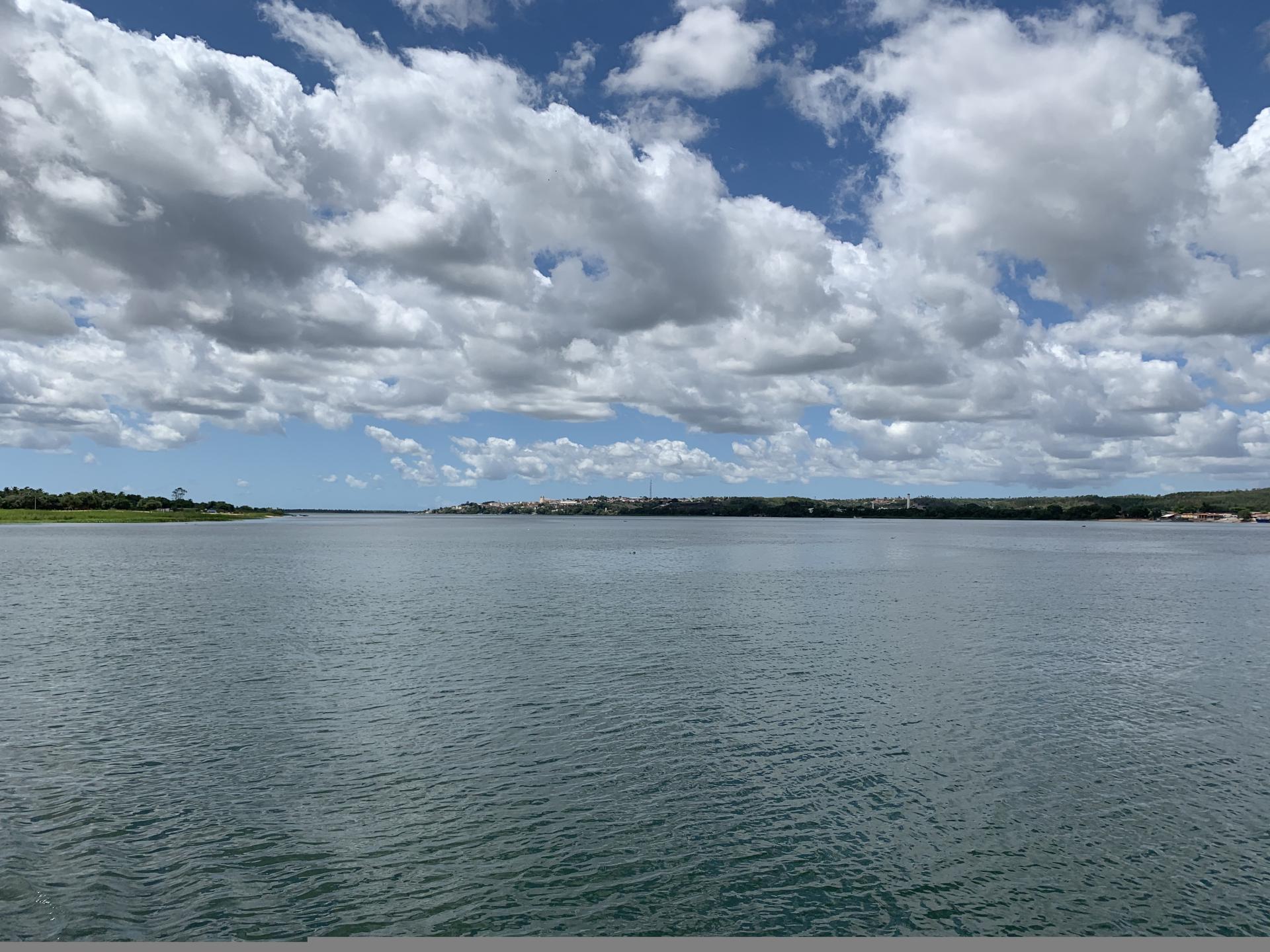 Brazil is considered the country with the most water in the world and is crisscrossed by huge rivers. If you think only of the Amazon, you will discover other enormous rivers when you look at the map or, at the latest, during a trip to Brazil. These lifelines of nature are not only located in the Amazon region but flow from the headwaters of the central highlands into all parts of the country and beyond its borders.
Brazil is hydrographically divided into 12 watersheds. The largest in area are the basins of the Amazon, Paraná, Tocantins-Araguaia, Paraguai, and São Francisco rivers.
Brazil's rivers are important trade routes, provide habitat for many people and animals, connect the different biomes and landscapes, and form the basis for the impressive nature that inspires Brazil travelers.
The connection of the people to the rivers is culturally deeply rooted. To this day, many indigenous people answer the question "Where are you from?" with the name of the river where they were born, rather than the geographical name or a place name.

The Amazon - From the Andes to the Atlantic Ocean

The Amazon River is known worldwide for the incredible amount of freshwater it carries. According to Brazil's National Water Agency, its water production could meet 74 percent of the country's total demand. The largest river in the world in terms of water volume rises in the Andes mountains and flows into Brazil at Leticia, a small border town in the tri-border area of Brazil, Peru, and Colombia. On its way from west to east, it passes through the states of Acre, Amazonas, Roraima, Rondônia, Mato Grosso, Pará, and Amapá and reaches the Atlantic Ocean after almost 4,350 miles (7,000 kilometers). The largest tributaries of the Amazon in Brazil are the Rio Negro, the Rio Madeira, the Rio Tapajós, and the Rio Xingu.
The gigantic river flows through one of the largest tropical forests in the world, the Amazon Rainforest. The flora of the Amazon region has high biodiversity and with more than 1.5 million cataloged plant species, it is the largest diversity of species on the planet.
Sediments and nutrients from the Amazon are carried far into the Atlantic Ocean and can be observed as turbulence even from space. The river is therefore of great global importance in terms of climate and nutrient transport in the world's oceans.

Rio Paraná - An international trade route in the southwest

The Rio Paraná is the second largest river in Brazil and is formed by the confluence of the Rio Parnaíba and the Rio Grande, which itself crosses the entire state of Minas Gerais in the west of the country. It is also joined by other large and important rivers for trade, such as the Rio Tietê from São Paulo, also known as the Hidrovia Tietê-Paraná and, unfortunately, for its terrible pollution.
On its way, the Rio Paraná crosses not only Brazil, but also Paraguay, Uruguay, and Argentina, and at the end of almost 2,485 miles (4,000 kilometers) flows into the Atlantic Ocean in the estuary delta called Rio da Prata.

The Rio Madeira rises as Rio Beni in the Andes of Bolivia. It runs from the Andes to the north, joins the Rio Mamoré-Guaporé, and becomes the Rio Madeira in the lowlands of the Amazon basin, marking the border between Brazil and Bolivia.
The "Wood River," because madeira means wood, gets its name from a large amount of alluvial wood it carries. When its level rises in the rainy season and floods large parts of the vast forest plain, logs and wood debris are carried along. From the Andes to its mouth in the Amazon, the Rio Madeira flows over 2,012 miles (3,240 kilometers) through the tropical rainforest. It becomes up to 6.2 miles (10 kilometers) wide during the rainy season and is therefore fundamental for the transport of sediments and nutrients in this part of the Amazon Rainforest.
The area of the Rio Madeira is still inhabited mainly by indigenous people and among them isolated and uncontacted peoples.
Unfortunately, the state of Rondônia, through whose north the Rio Madeira flows, has one of the highest rates of deforestation in the Amazon Rainforest. As a result, land conflicts and threats to indigenous reserves are on the rise. Aside from agribusiness development and associated slash-and-burn agriculture and pesticide use, the Rio Madeira and the quality of life of its residents are threatened by large-scale hydroelectric projects.
Although the Santo Antônio and Jirau dams are considered the two largest projects in the region's economic growth program, it was not until 2011 that the Brazilian federal government took action to try to protect the isolated indigenous people.

Known as the Velho Chico, the Rio São Francisco rises in the Serra da Canastra in Minas Gerais and, with its more than 1,864 miles (3,000 kilometers) of length, cuts through the entire northeast region of Brazil.
Traditionally, the Rio São Francisco region was inhabited by the Xacriabá ethnic group. Most of the indigenous settlements were located in the estuary delta on the Atlantic coast at what is now the border of the states of Sergipe and Alagoas. After the arrival of the Europeans in 1501, the inhabitants were displaced and had to retreat to the hinterland. The Caatinga Forest there was long considered a dangerous area for the invaders, as impenetrable scrublands and indigenous tribes prevented the Europeans from entering the land.
The Rio São Francisco has enormous economic, social, and cultural importance for the region, as its water serves to supply and energize much of the surrounding population, as well as providing transportation and connecting routes between towns.
Despite its great importance to the more than 16 million people who live in its watershed, the Rio São Francisco is unfortunately in critical condition today. Siltation in some sections, pollution, and deforestation of riparian forests that protect springs, rivers, and lakes threaten the river.
However, there are good prospects for the Rio São Francisco, as the region has been promoted at the state level, becoming the largest producer of tropical fruits in Brazil. It is also one of the few regions in the world where grapes can be harvested twice a year, and the valley has therefore established itself as Brazil's wine region.
Because of this development, the Vale do São Francisco is increasingly receiving special attention in the area of nature and water conservation.

Rio Tocantins - From the Cerrado to Maranhão and Pará

The highest springs of the Rio Tocantins rise in the mountainous region of Chapada dos Veadeiros in the state of Goiás. The waters flow in a northerly direction, passing through the entire state of Tocantins. Shortly before Marabá in the state of Pará, the Rio Tocantins joins another mighty stream, the Rio Araguaia. This also rises in the Cerrado near the National Park Das Emas and is known for its abundance of fish.
The Tocantins-Araguaia River Basin, with an area of 373.4 square miles (967,059 square kilometers), is the largest watershed located exclusively in Brazilian territory. This amount is equivalent to 10.8 percent of the total area of the country.
409 municipalities are located in the Rio Tocantins area. Among them are Belém, Marabá, and Ananindeua in Pará, Imperatriz in western Maranhão, and Palmas and Araguaína in Tocantins state.
Most of the population along the banks of the Tocantins lives in urban areas and is concentrated mainly in the metropolitan area of Pará's capital. Outside, the vast areas are sparsely populated.
Economically, the Rio Tocantins is of fundamental importance to the region, which gets almost all of its electricity from the hydroelectric plants along the river. But tourism is also gaining importance, not least due to the development of the Jalapão State Park, one of Brazil's most impressive natural wonders.

One of the most impressive experiences on a Brazil vacation is the waterfalls at Foz do Iguaçu. Here, the water masses of the Rio Paraná plunge into the lowlands in more than 275 waterfalls over a width of 1.86 miles (3 kilometers). Visitors can experience this natural wonder along the panoramic paths and hiking trails, and the surrounding national parks on the Brazilian and Argentine sides of the river are therefore among the most popular destinations on a South America trip.

If you want to take a river cruise by boat in Brazil, the Amazon is the place to be. Whether adventurous in a hammock, on a private ship expedition, or on a comfortable cruise, travelers can experience the Amazon and its tributaries up close in all its facets.

The Pantanal, famous among photographers for wildlife viewing, is also a river destination. This is because the waters of the Rio Paraguay branch off into countless sidearms, tributaries, and lake landscapes in addition to the main river, making the Pantanal one of the largest inland wetlands in the world. People from all over the world come to see jaguars, monkeys, and caimans in their natural environment from a boat or motorboat.

However, a destination on the river is not only about adventure and waterfalls. For example, the white sandy beaches and clear waters of the Rio Tapajós invite you to a beach vacation. The small town of Alter do Chão near Santarém is therefore also called the "Caribbean of Amazonia".

A river cruise also has a lot to offer in terms of cuisine. Fresh fish and exotic fruits, but also delicious wine. That's because the Rio São Francisco valley is home to one of the country's best wine regions.