German Cultural Heritage in Brazil - How the Oktoberfest Came to Brazil 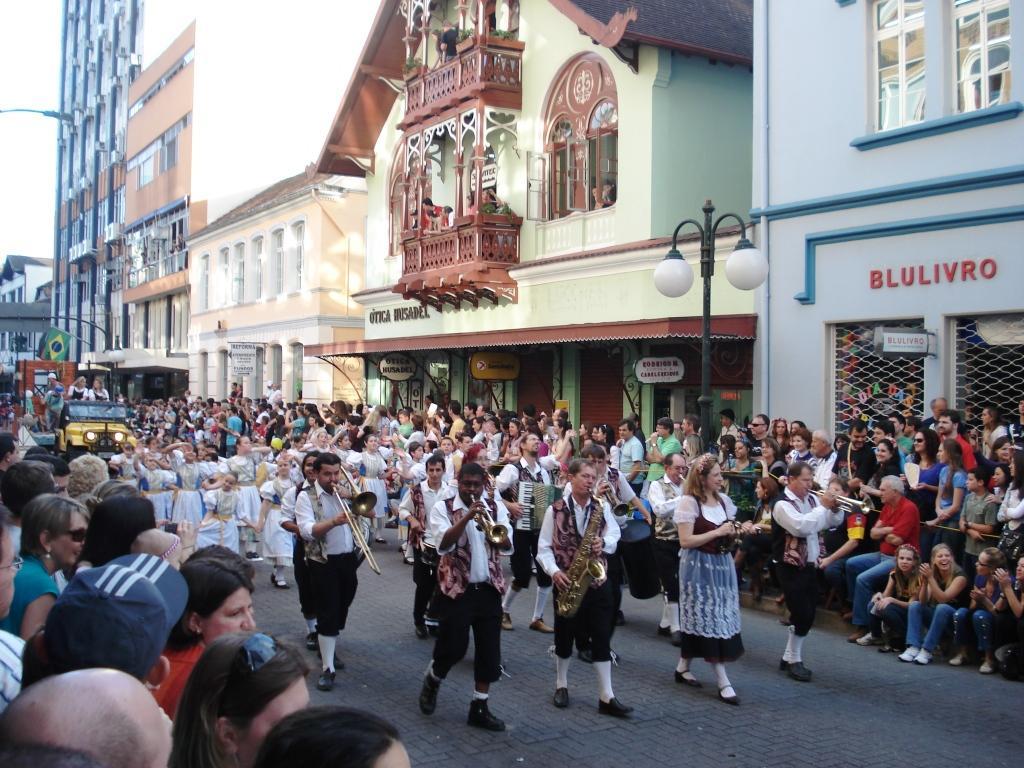 Brazil or Germany after all?

If on vacation in Brazil you suddenly get the feeling that you are back in your German homeland, then perhaps you are celebrating at the Oktoberfest in Blumenau. You are certainly traveling in the Brazilian south because immigrants from Germany have left their mark in particular here. In streets lined with half-timbered houses, it is not uncommon to meet blond, blue-eyed Brazilians. In the background, you can often hear traditional German folk songs.

From the late 19th to the mid-20th century, an average of two thousand German immigrants arrived in Brazil each year. In peak years, there were even over eight thousand. The new arrivals wanted to escape the social, economic, and political injustice in Europe and build a new, carefree life overseas. Colonies were established in what are now the Brazilian states of Santa Catarina, Rio Grande do Sul, and Paraná.
Because of the temperate climate and the European-like landscape, the settlers preferred the Brazilian south as their new home. The German immigrants stayed together as much as possible and founded settlements together so that they preserved their ancestral cultural heritage in Brazil and passed it on to their descendants.

The heritage of German immigrants

German cultural heritage can be found mainly in Santa Catarina. Here lies the city of Blumenau, which was founded in 1850 by pharmacist Hermann Blumenau and has celebrated the second largest Oktoberfest in the world since 1984. In 1861, Pomeranian immigrants founded Pomerode, "the most German town in Brazil". Especially in these two small towns, German customs are still lived today - sometimes exaggerated. Don't be surprised to see numerous people wearing lederhosen and women in dirndls, communicating in Hunsrück or Bohemian Forest dialect, garnished with snatches of Portuguese.
Shooting and singing clubs keep the German traditions alive in Blumenau and its surroundings. Much to the delight of tourists. Visitors from Germany in particular are delighted to be able to gain such exotic experiences in their homeland. They enthusiastically enjoy bratwurst and beer in the beer garden while swaying to brass band music or admiring Schuhplattler dancing. The highlight of German culture in Brazil is undoubtedly the Oktoberfest in Blumenau, which is held annually in the Parque Vila Germânica.

The model for the Oktoberfest in Blumenau is the Munich original. In Munich, the festival was first held in 1810 to celebrate the wedding of the Prince of Bavaria and Princess Theresa of Saxony. All citizens were invited to enjoy themselves with singing, dancing, and funny competitions. The festival became such a great success that it has been repeated every year since. The good reputation of the Munich Oktoberfest spread abroad as well, wherever German immigrants settled.
In Brazil, the first version was held in Itapiranga in Santa Catarina, before Blumenau became the venue in 1984. Before that, the Itajaí-Açu River, which had overflowed its banks, had caused severe flooding in Blumenau, plunging the city into a financial and mental crisis. The festivities were intended to cheer up the people and give them a helping hand. Nobody could have expected the overwhelming success.
In the meantime, the Oktoberfest in Blumenau has become one of the largest popular festivals in Brazil and the largest German festival outside of Germany. Every year it attracts about seven hundred thousand visitors. They taste local beers, feast on traditionally German-inspired dishes, and eagerly follow the spectacle on offer. Several music bands from Munich are only too happy to come to Brazil to conjure up a real Oktoberfest atmosphere in Blumenau. The revelers cheerfully belt out "Jetzt geht's los" and "zick-zack, zick-zack, hoihoihoi". Traditional German dances, marches, and shooting competitions provide plenty of variety. German customs live in the neat traditional costumes of the Blumenauer. The highlight of the folk festival is the election of the Oktoberfest queen.
The center of Blumenau is fully integrated into the Oktoberfest activities. Every Wednesday and Saturday during the festival weeks, parades with magnificent floats pass through the main street. But the real event takes place in Parque Vila Germânica. There, the Oktoberfest party goes on from morning to night and the beer flows in streams. Even though the beers are Brazilian, the names are reminiscent of Germany: Eisenbahn, Baden Baden, Bierland, Das Bier, Königs Bier, Zehn Bier, Opa Bier, Schornstein, Wunder Bier.... (Railroad, Baden Baden, Beer Country, The Beer, King's Beer, Ten Beer, Grandpa Beer, Chimney, Miracle Beer)

Undoubtedly, German immigrants have left their footprints in Brazilian society. Often, even a glance at the menu reveals the German influences in the gastronomy: Potato salad, sausage, strudel, and beer are part of everyday life in many places in Brazil. Not to forget the Oktoberfest in Blumenau. See for yourself during your trip to Brazil!