Hunters and Hunted - The "Big Five" of Brazil's Wildlife 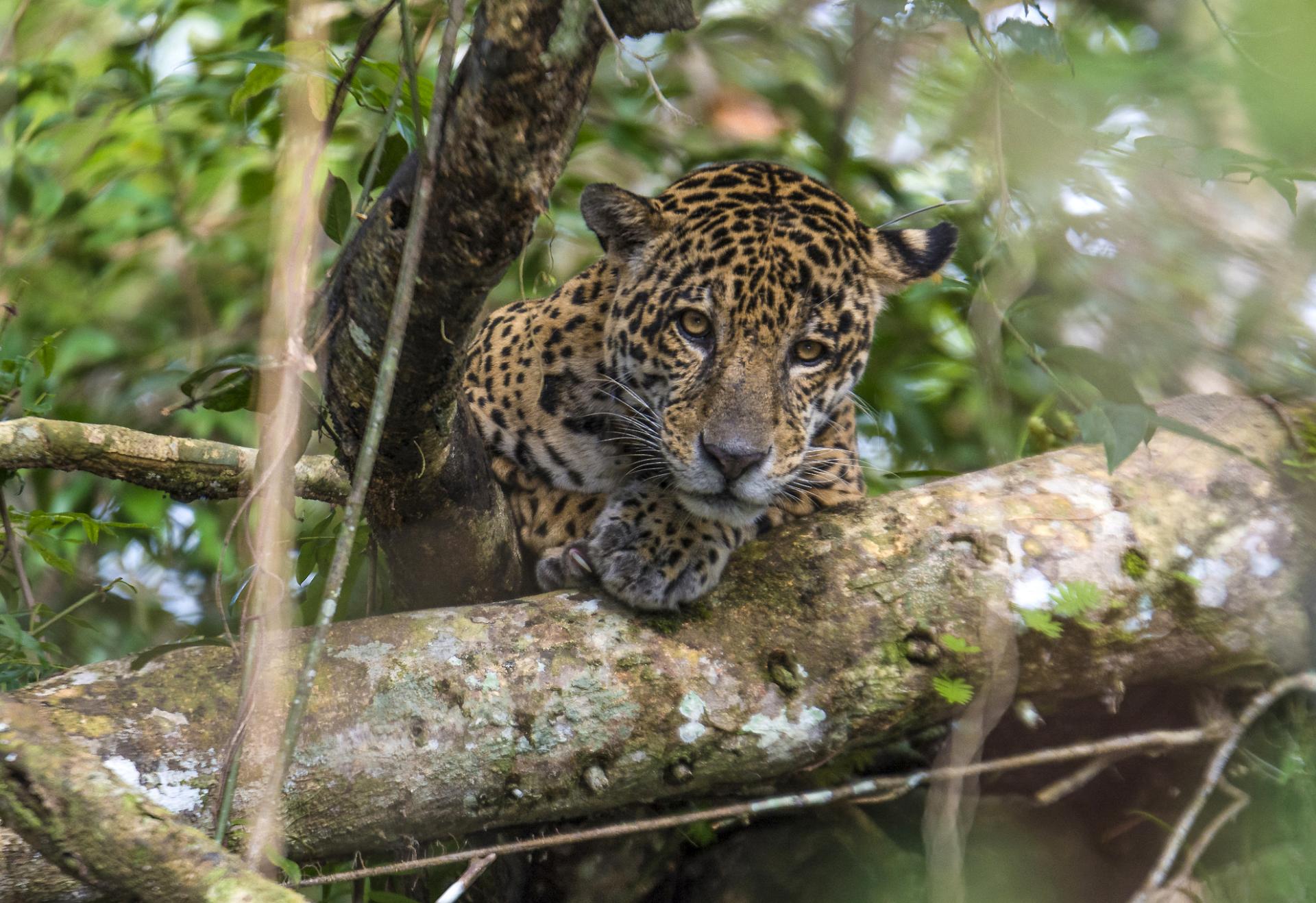 Among the largest mammals in Brazil, the country's "Big Five", are the anteater, giant otter, tapir, maned wolf, and jaguar. They are certainly among the most famous representatives of their species and are for many travelers the highlight of an animal observation during a trip to Brazil.
Not to be forgotten are other giants of Brazil's exotic fauna, such as the up to 33 feet (10 meters) long anaconda, the up to 19.6 feet (6 meters) large black caimans, or the arapaima fish in the Amazon basin, which can reach up to 10 feet (3 meters).

The largest of the four anteater species, the giant anteater can reach a length of 7.9 feet (2.4 meters) from the tip of its snout to the tip of its tail. It has gray-brown fur, its front paws are white, its chest and back are marked by black stripes, and its tail is bushy, long, and hairy. Anteaters are toothless animals, but with their long tongues, they catch about 35,000 ants and termites a day. To do this, they scrape the walls of the insect burrows and tongue 150 times per minute to quickly catch as many ants and termites as possible. However, since they are attacked by the insects in the process, they linger only briefly and move from burrow to burrow in search of food.

These imposing animals are found throughout South and Central America, although their population in Central America has declined sharply. They roam large areas and are generally found in tropical dry forests, savannas, and open grasslands.

Giant anteaters are generally solitary. Females have a single cub once a year, which can sometimes be seen on the mother's back. The cubs leave their mother after two years when they are fully grown.

Anteaters are not aggressive, but when cornered, they stand on their hind legs, using the bushy tail for balance, and attack their opponent with their front paws. The anteater's claws are about 3.94 inches (10 centimeters) long, and the animals can even fight with a puma or jaguar.

According to the IUCN Red List, giant anteaters are the most endangered mammals in Central America and are already considered extinct in Guatemala, El Salvador, and Uruguay. One of the main threats to giant anteaters is habitat loss due to fires, expansion of intensive agriculture, and increased road traffic.

The giant otter, Latin Pteronura brasiliensis, is common in South America, including Brazil, Bolivia, Peru, Paraguay, Venezuela, and Ecuador. The giant otter lives in family groups of up to 15 animals that inhabit riparian areas, slow-current rivers, streams, and lakes. They generally look for places with dense vegetation and banks where they can build their burrows. These gregarious, droll, and nimble animals are true entertainers, making them popular among wildlife watchers.
In addition to burrows, giant otters build latrines to meet their physiological needs, as well as campsites near feeding areas for resting and territorial delineation.

Giant otters have an elongated body that can grow up to 9.2 feet (1.8 meters) in length and weigh about 70.5 pounds (32 kilograms), brown fur, and a white patch on their necks. They have a long, flat tail and webbed toes. While they appear somewhat clumsy and awkward on land, they are extremely nimble and agile in the water.
The giant otter feeds primarily on fish and some invertebrates such as mollusks and crustaceans, as well as smaller mammals and birds.

The giant otter is classified as endangered on the IUCN Red List. The main threats are hunting, capture for sale as pets, environmental degradation and habitat fragmentation due to pollution of water bodies, and the impact of dam construction, especially hydroelectric dams.
All of these factors have contributed to the decline of populations and in some regions of Brazil, such as the Atlantic Rainforest, the giant otter is already extinct.

The lowland tapir, with the Latin name Tapirus terrestris, makes its home in Brazil in the Amazon Rainforest, Atlantic Rainforest, Cerrado, and Pantanal. The nocturnal tapirs are best seen on a night safari or an early morning walk along riverbanks.

These mammals are solitary animals, moving alone or in small groups of up to three individuals. During the day, tapirs rest their bodies, which can weigh up to 661 pounds (300 kilograms), saving energy for nighttime foraging forays. Their diet consists of leaves, bark, and fruit. Research has shown that the animals consume 58 fruits from 23 different plant families. Because they eat so much, they play an important role in dispersing seeds throughout the areas where they live.

Tapirs' gestation period lasts 13 to 14 months, so they reproduce slowly. The calves stay with their mothers for about 12 months after birth.

The natural enemies of tapirs are jaguars and pumas. But the far greater threats today are hunting, logging, fire, and traffic, so the species has lost 30 percent of its population as well as 30 percent of its habitat in the last 33 years.

Maned wolves - The landmark of the Cerrado

The maned wolf is distributed in the Cerrado and the transitional areas of the Caatinga, Pantanal, Atlantic Rainforest, and Pampas.
It is the largest Brazilian member of the dog family and hunts small vertebrates such as rodents, birds, and reptiles, as well as arthropods. In some cases, remains of larger animals, such as deer, have been found in the maned wolf's droppings. However, researchers disagree on whether maned wolves attack these prey or only consume dead carcasses.
Their menu also includes a myriad of fruits, such as the fruta-do-lobo or lobeira, a tree with thorny bark, twisted growth, large hairy leaves, and green fruit about the size of a grapefruit. Maned wolves eat fruits in large quantities, but excrete the seeds, and therefore play an important role in the conservation and propagation of plant species.

To hunt or eat fruits, the wolves prefer the late afternoon and night. As a rule, they do this alone. However, the monogamous animals may be accompanied by a mate during the breeding season. They are very territorial and live in territories ranging from 7.7 to 44.4 square miles (20 to 115 square kilometers), depending on food availability. The females give birth to up to five pups after a gestation period of maximum 65 days.

Brazil travelers who want to see the animals have good chances to do so in the Chapada dos Veadeiros in the middle of the Cerrado. But you can get especially close to the animals on their evening forays on the grounds of the Pousada do Caraça in Minas Gerais.

The jaguar, Latin Panthera onca, is a cat species found in virtually all Brazilian biomes, except the Pampas. This carnivorous mammal is considered the largest predatory cat in the Americas and the largest carnivorous animal in South America. Jaguars, although widespread, are very shy and usually hide in thickets when humans are around. To see the elegant felines in their natural habitat, wildlife watchers must have some patience and luck.

Sexual maturity of jaguars occurs at two to two and a half years for females and three to four years for males. The gestation period can be up to 105 days and up to four pups are born. The young do not become independent of their mother until they are 2 years old.

Their natural prey are wild animals such as peccaries, capybaras, white-lipped peccaries, deer, and armadillos. However, when the number of these animals decreases, usually due to man-made environmental changes, jaguars can also attack domestic animals and cattle and are therefore unfortunately hunted by farmers.

Since the jaguar is at the top of the food chain and requires large protected areas to survive, this simultaneously feared and admired animal is an indicator of the quality and preservation of the environment. The presence of these cats in a region indicates that it still offers good conditions for their survival. The increasing environmental changes caused by man, as well as deforestation and hunting of wild prey and jaguars themselves, are the main causes of the decline of the jaguar population in Brazil.

Anteaters, giant otters, tapirs, maned wolves, and jaguars are the five most famous representatives of Brazil's wildlife. But the exotic nature of the country is home to many different species and wild animals can be seen in all parts of the country. Examples are tufted monkeys, toucans, or armadillos, which are widespread and even come to urban areas, feeding on the fruit trees of the gardens.

Travelers who want to see a lot of animals on a Brazil vacation are usually drawn to the Amazon first. When staying at a jungle lodge, very different safari tours are offered to experience the nature of the Amazon in all its facets. The Uakari Lodge in Tefé also offers special jaguar expeditions, where tourists can accompany research work in the Mamirauá Reserve for several days.

However, due to the dense vegetation and high treetops in the Amazon Rainforest, the chances of sighting many animals are somewhat lower. Therefore, for many Brazil travelers, the main destination for wildlife viewing in Brazil is the Pantanal. Here there are wide open spaces, the vegetation is lower, and the jaguars in the protected area around Porto Jofre have become accustomed to the presence of humans after years of protection, and can be observed from the boat. Specially trained local guides accompany the safari tours and ensure the protection of humans and animals so that nothing stands in the way of an unforgettable nature experience.