The Cerrado – The Savannah with the Greatest Biodiversity in the World 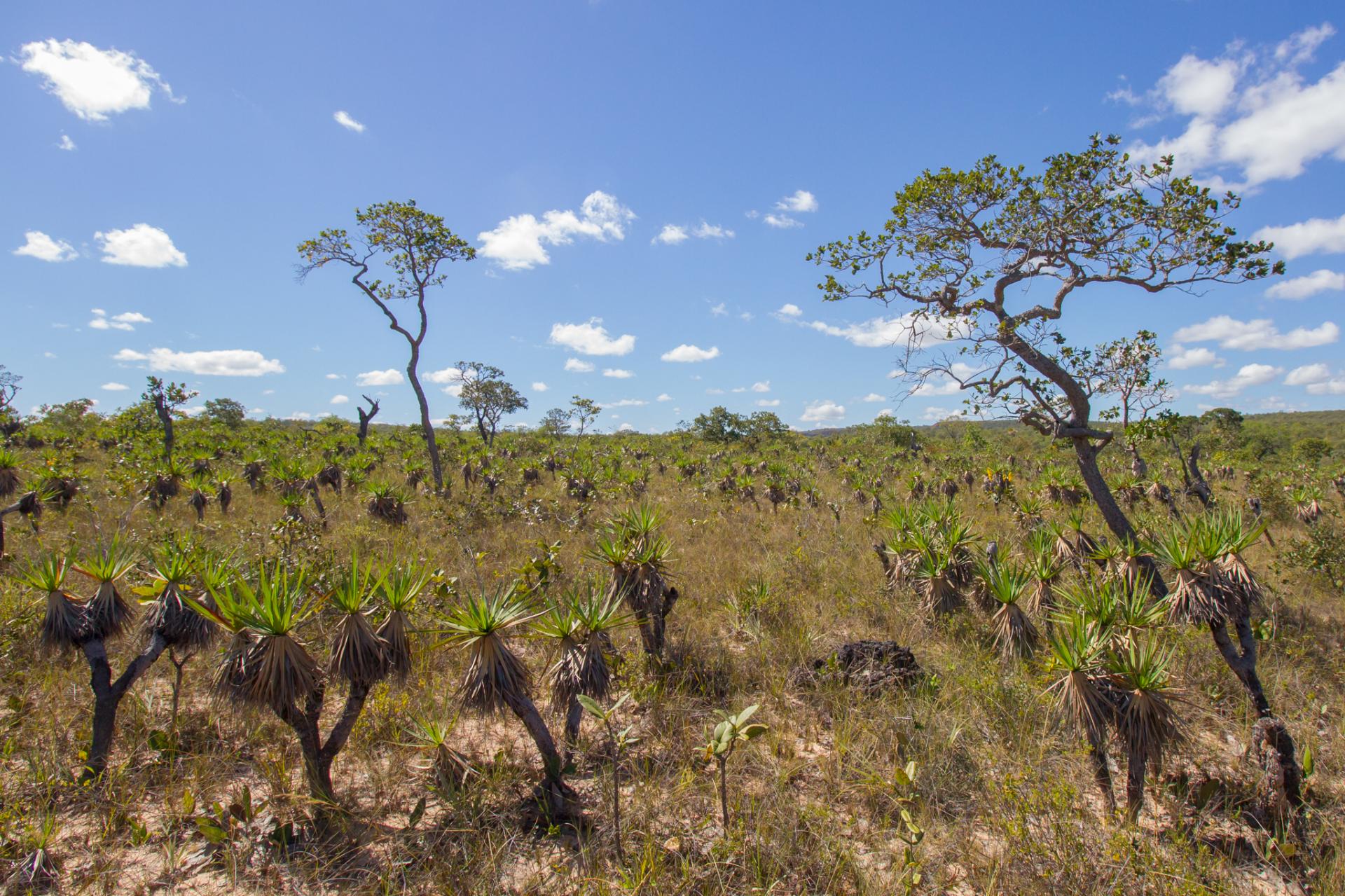 When thinking about the nature of South America, the first thing that comes to mind for many Brazilian travelers are often the treetops of Amazonia, the vast swamplands of the Pantanal, the palm-lined beaches of the Atlantic coast, or even the snow-capped mountains of the Andes.
The second-largest ecosystem in South America after the Amazon, however, is the Cerrado, a savannah landscape that extends over more than 2 million square kilometers across large parts of central Brazil to Bolivia and Paraguay.

The Cerrado has hardly been in the focus of the world public or a Brazil trip, although nature could hardly be more varied: crystal clear and turquoise blue rivers, countless waterfalls, tropical forests, canyons, plateaus, and wide grass and bush landscapes characterize the image of the Cerrado.

This diversity is reflected in animal and plant life. The Cerrado is considered a biodiversity hotspot and is home to countless endemic species.

The Cerrado plateaus are known in Brazil as the origin and cradle of water, Berça das águas. The sources of the country's largest watersheds and most important rivers are located here. These include the Rio Xingu, Rio Tocantins, Rio Araguaia, Rio São Francisco, Rio Parnaíba, Rio Gurupi, Rio Jequitinhonha, and Rio Paraná. A glance at the map shows the dimension of these river systems, which cross the lower Amazon region, the Pantanal, and the Atlantic Rainforest, providing water for agriculture and Brazil's largest urban centers.

The forests of the Cerrado seem small compared to the treetops of the Amazon or the Atlantic Rainforest. However, this is not the case when the actual size of the trees is considered and the root system is included because two-thirds of Cerrado's trees are underground. The long roots thus enable survival during the dry season and also form natural water pipes that carry rainwater to the deeper layers of the earth. Shallow-rooted monocultures such as those on the soy plantations, on the other hand, impair the inflow of the deeper aquifers, whose water level thus continues to decline.

The Cerrado is essential for supplying aquifers, especially the Guaraní aquifer, which extends over a vast area in South America, from western and southern Brazil to Paraguay and Argentina. The ever-humid marshlands of the Pantanal also draw groundwater from the Cerrado's headwaters.

On a trip to Brazil through the Cerrado, the Buriti palm trees catch the eye. The palms, up to 30 meters high, line the headwaters and upper river courses. If you get lost in the scrublands and are looking for water, all Cerrado locals know that there is always a spring or small stream at the base of a buriti palm. The palm tree is also used in many ways in local products, either to make oils from the fruit, handicrafts, or even furniture from the wood of the giant palm branches. The Buriti palms also provide a home for countless animals and especially for the different macaw species that breed in the palm trunks. The flight of the macaws is omnipresent in the Cerrado and the animals are hard to miss thanks to their loud voice, size, and colorful feathers.

The "Big Five" mammals of the Cerrado include the vegetarian maned wolf, big cats like the jaguar, the puma, and their prey tapirs and giant armadillos. It is also home to anteaters, various species of deer, greater rheas, foxes, otters, and tayras.

The Cerrado is home to 837 bird species, 120 reptile species, 150 amphibian species, 1,200 fish species, 90,000 insect species, and 199 mammal species. Together, they account for 5 percent of the world's species and 30 percent of Brazil's biodiversity.

The Cerrado's varied landscape, topography, and vegetation create the basis for this diversity and provide diverse ecological niches occupied by many endemic species. For example, one of the rarest bird species in the world, the diving duck Pato Mergulhão, makes its home in the Serra de Canastra and Chapada dos Veadeiros areas. Estimated to number 240, they live only in the clear rivers and dense floodplain forests of the Cerrado.
Besides, the Cerrado forms the bridge between Brazil's biomes, connecting the Pantanal, the Amazon, the Atlantic Rainforest, and the Caatinga, allowing animals and plants to migrate. This contact allows for variations in genetic makeup and specific adaptations of animal and plant life.

The climatic conditions of the Cerrado also require the adaptability of its inhabitants. In most areas of the Cerrado, there is almost no rain at all from May to September, and humidity can drop to as low as 8 percent. Then, starting in October, tropical thunderstorms sweep across the savannah, ushering in the beginning of the rainy season. Then nature awakens from its hibernation of drought, the orchids and trees begin to bloom, the caju trees bear their fruit, and animals and plants compete for the best places to reproduce. Then, in the rainiest months of February and March, nature comes to rest, replenishing its reserves until May, when the drought and the cycle begin all over again.

The Cerrado is threatened - fire, soy, and cattle farms

So far, unfortunately, little international attention has been paid to the Cerrado. Even for many Brazilians, the savannah is generally considered to be nothing more than a no-man's-land scrubland that is being converted to agricultural land. As a result, the Cerrado has lost 60 percent of its original vegetation in the last two decades. To date, only 3 percent of the area is protected. In addition to cattle ranches and eucalyptus plantations, intensive agriculture of soy and corn cultivation is spreading. Land conflicts between the local population and large landowners are therefore an everyday occurrence in many regions. Especially in remote regions of the Cerrado and in the transition regions to the Amazon, there are therefore devastating forest fires in the dry season and dramatic deforestation rates.
Growing tourism is counteracting this development somewhat, and the Cerrado is currently gaining more attention among Brazilians and international visitors. Research has also discovered the value of the savannah as a source of central water veins and biodiversity in the fight against climate change, so that more and more international conservation projects have been established in the Cerrado in recent years.

Travelers should let themselves be surprised by the diversity of the Cerrado during a Brazilian vacation. If you are looking for unspoiled landscapes and spectacular waterfalls, if you like hiking, or if you want to go on a rental car trip, this is the right place for you.
In the heart of the Cerrado lies the Chapada dos Veadeiros National Park, just under 3 hours drive from the capital Brasília. Most of the trails in and around Chapada dos Veadeiros National Park can be explored on your own without a guide and offer a nature experience for the whole family. The national park has even been a UNESCO World Heritage Site since 2001 and was voted the best national park in Brazil by visitors in 2020, thanks to its good infrastructure and natural attractions.

The Jalapão Nature Reserve is also located in the vastness of the Cerrado in the state of Tocantins, far from the well-known tourist resorts. A trip there is therefore considered an insider tip among nature enthusiasts and, despite the growing tourism, still has more of an expedition character today. A tour to the Jalapão should therefore only be undertaken with an experienced guide and a four-wheel-drive vehicle. The dune landscapes, waterfalls, table mountains, and the Fervedouros, turquoise blue spring pots, in untouched nature form a unique landscape, which makes every Brazil vacation unforgettable!