On the Road in Búzios 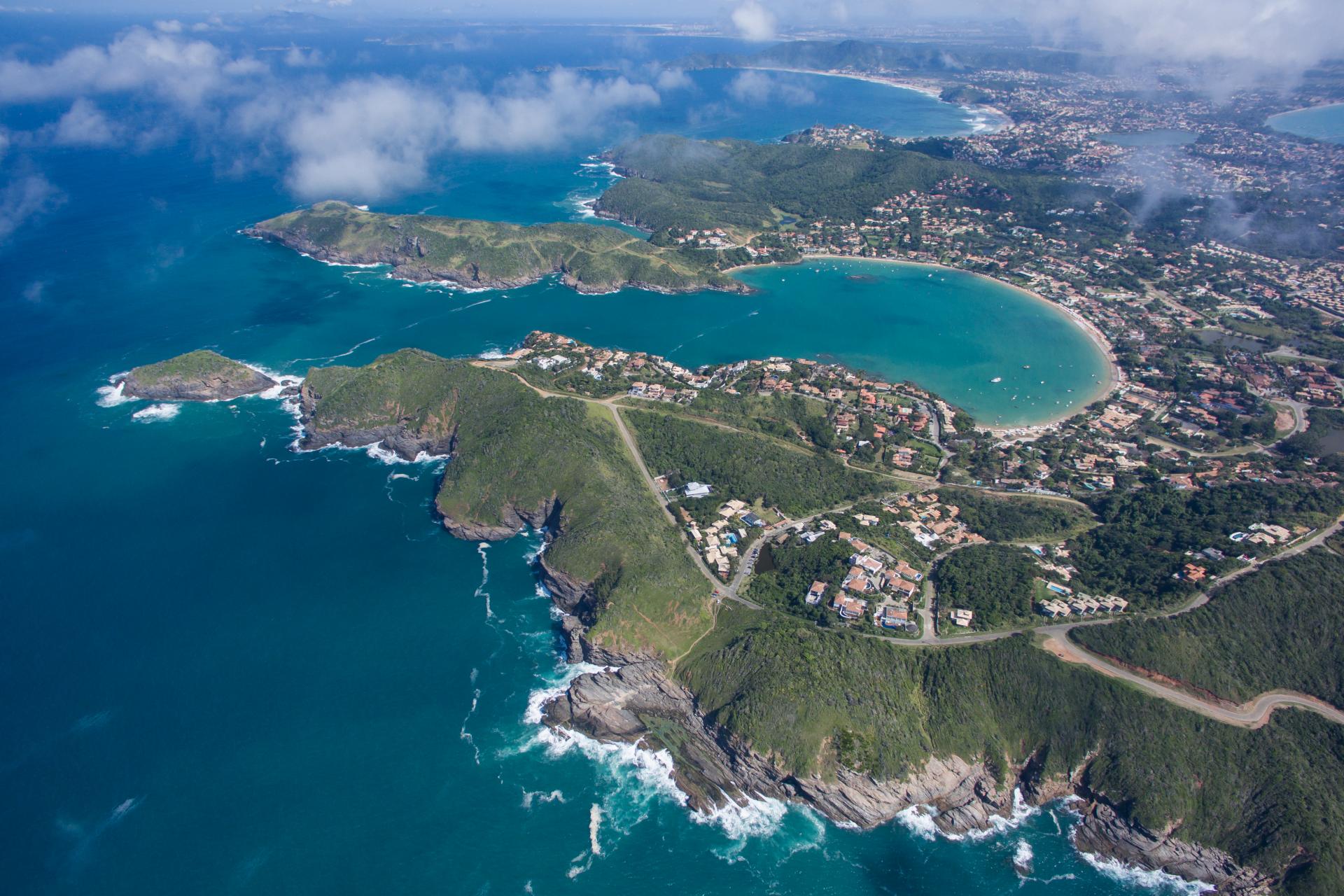 On a round trip in Brazil, most people pass by Rio de Janeiro and not only because the airport there is the gateway to Brazil for many. The metropolis also inspires with many unique landmarks, such as the Statue of Christ, the Copacabana, the Tijuca National Park, or the Sugar Loaf Mountain. Nevertheless, after a few days in the metropolis, you may find yourself longing for the beach, the sea, and relaxation. Approximately three hours by car separate Rio de Janeiro from the enchanting peninsula of Búzios, which is also very popular with Brazilians.

A peninsula surrounded by beaches

The enchanting Búzios is located on a peninsula lined with 17 beautiful beaches. This place was just a simple fishing village until the early 1960s. Then it was discovered by Brigitte Bardot and her Brazilian boyfriend. Today it is one of the most refined and lively beach resorts in Brazil, full of boutiques, exclusive restaurants, villas, bars, and luxury pousadas. The Mediterranean atmosphere introduced by the Portuguese has not been lost. The cobbled streets and picturesque waterfront contribute to the image of the Brazilian Saint-Tropez.

Búzios is not just a small town but consists of three different urban centers located on the same peninsula: Ossos, Manguinhos, and Armação de Búzios. Ossos, at the northern end of the peninsula, is the oldest and nicest town center, with a pretty harbor and yacht club, as well as some hotels and bars. Manguinhos, on the isthmus, is the main commercial center. Armação de Búzios, which lies between the other two, is the heart of the peninsula, with most tourist facilities. Here you can also find Rua das Pedras, the center of Búzios' nightlife, and Orla Bardot, the picturesque beach promenade.

The most beautiful beaches in Búzios

On the peninsula, the beaches are clearly among the main attractions, as each has its charm and style. One of the trendiest beaches in Búzios is Praia de Geribá, which is especially popular with the younger crowd and attracts surfers and windsurfers all year round. Rasa and Manguinhos beaches are also very popular for windsurfing and kitesurfing, as strong winds are constantly blowing on this side of the peninsula.

Very close to Geribá beach is Ferradurinha beach. It has a very short strip of sand but offers a beautiful landscape with a calm sea and crystal clear water, ideal for travelers with children and snorkeling. The beach is also highly recommended for kayaking and stand-up paddling. Calm waters can also be found at Tartaruga and João Fernandes beaches. João Fernandes beach is one of the most beautiful beaches in Búzios, which is why it is always well visited. The scenery on this beach is beautiful. The sea is mostly crystal clear and looks like an outdoor swimming pool. Snorkeling is recommended on the rocky coastline on the right side of the beach. On the way to the beach, you pass a great lookout point that offers a great panoramic view.

Incredibly great sunsets can be enjoyed at Praia da Tartaruga. The beach is surrounded by beautiful vegetation of cacti, bromeliads, and a long strip of sand. The sea is blue, calm, and transparent, and if you are lucky you can see turtles here, which gave the beach its name.

The central coast, formed by the beaches of Canto, Armação, and Ossos, still reminds of a fishing village, since many colorful boats are moored in front of the coast. From there you can walk to the wonderful beaches of Azeda and Azedinha, small and surrounded by lush vegetation.

If you want to escape the hustle and bustle of Geribá and João Fernandes beaches, Praia do Forno is a great option. Being a bit more hidden, this beach is much quieter, less visited by tourists and at the same time offers a beautiful natural landscape. Also unique is the pink sand, which you won't find on any other beach in the region. Mirante do Forno is located about 0,6 miles (1 kilometer) from Praia do Forno. From there you can admire the entire beach and its surroundings.

Whether in the water, on land, or in the air - there is never a dull moment in Búzios. The peninsula surrounded by beaches has many other activities to offer besides relaxing on the numerous beaches. A boat tour along the many beaches is a great way to get to know as many of them as possible and choose your favorites for further excursions.

The crystal clear water around Búzios invites you to numerous activities on and under the water. The diverse marine life makes Búzios a true aquarium. With about 33 feet (10 meters) of visibility, beginners and experienced divers have perfect conditions to enjoy the beauty hidden under the sea. Near the coast, the best places for snorkeling are the shallow coasts of João Fernandes, João Fernandinho, Praia do Forno, Azeda, and Azedinha. For diving, Ilha da Âncora, located about six miles (10 kilometers) offshore, is one of the most suitable places. The island offers visibility averaging 39 feet (12 meters) almost all year round. Other popular spots are the islands of Gravatás, Filhote, and Ilha Feia. The entire coast of Búzios is rich in marine life. One of the reasons for this are icy ocean currents coming from Antarctica, which bring many nutrients.

Besides diving and boat trips, you can also go surfing, kayaking, wakeboarding, fishing, sailing, and make SUP tours on the water.

There is also a lot to do on land, such as visiting the golf course of Búzios, walking in nature to the different viewpoints, or along the beach promenade and Rua das Pedras. Lovers of ecotourism can enjoy nature during hikes, bike rides, and walks.

Those who want to experience Búzios at night should not miss a trip to the Rua das Pedras. On a length of just over 1,968 feet (600 meters), the "pedestrian zone" combines trendy bars, sophisticated restaurants, designer stores, inns, cafes, art galleries, ice cream parlors, nightclubs, and much more. During the day, there's not much going on in Rua das Pedras, but when night falls, that changes quickly and there is a hustle and bustle that extends toward Orla Bardot as well.

On foot, by van, or by water cab

The most practical and fastest way to get around Búzios is by car. With a navigation system, it is not a problem to find the different beaches of the city. Besides, this way you can organize your trips according to your preferences, stopping on the way to get to viewpoints and the sea. However, if you want to avoid the traffic and the search for parking, you can also explore Búzios on foot, by bike, by cab, or by buggy.

The distances between the nearest beaches can be easily covered on foot or by bicycle. Some paths, such as the one to Praia Brava, can be quite strenuous, but you will be rewarded with beautiful views. Some beaches also have small walking paths, so a walk along the beaches is almost a given. Especially in high season, it is a good idea to walk or bike to the nearest beaches, as traffic and lack of parking can sometimes test your patience.

In Búzios, cabs not only operate on land but also on the water. Since on many beaches in Búzios the sea is calm, you can also take a water cab directly to the beach. This way you can reach your destination quickly and save yourself the search for a parking space. The rides cost between 5 and 30 reais per person (between 1 and 5.50 US Dollar as of March 2021) and vary depending on the distance and number of passengers on the boat. If you also want to return by sea, don't forget to ask the boat operator about available boats for the return trip.

With a full 2,500 hours of sunshine a year, it's self-explanatory why Búzios is a popular destination for sun worshippers and beach lovers. If your Brazil trip also includes a stop in Rio de Janeiro, a beach vacation in Búzios can provide the perfect break from the hustle and bustle of the big city.