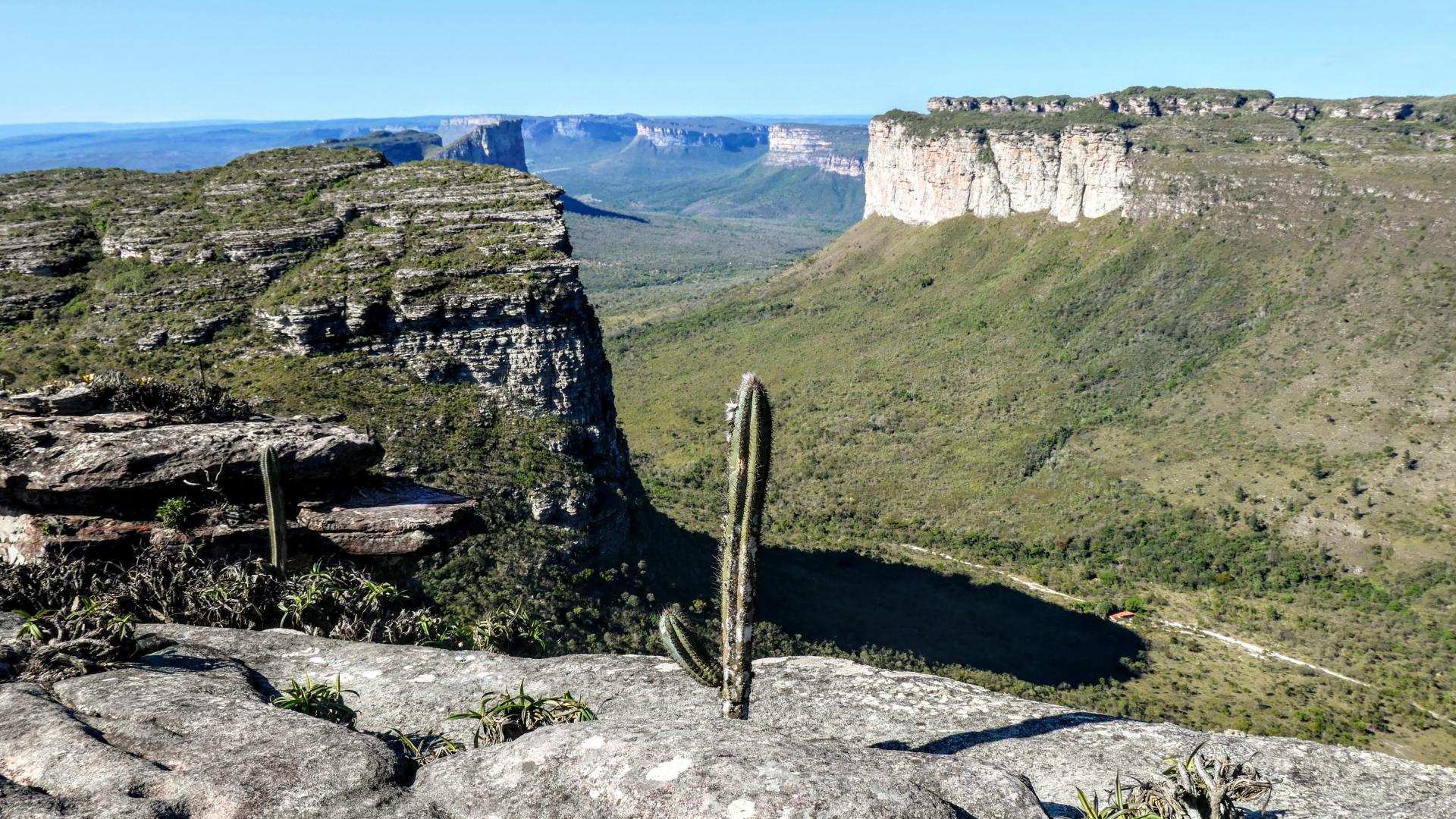 Whether in the Atlantic Rainforest near the Brazilian coast, in the dry savannah of the Cerrado, in the wetlands of the Pantanal, in the famous Amazon Rainforest, in the Caatinga in the northeast, or the Pampas located in the south. Brazil is one of the richest countries in the world in terms of flora. The diversity of climate, relief and soil provide unique biodiversity with over 56,000 different species of native plants, which, according to the Brazilian Institute of Forests, represent an important national heritage. Whether for medicinal or cosmetic purposes or simply for ornamentation, plants from Brazil are used all over the world.
With a little luck, on your next Brazil vacation, you may also get to know some of Brazil's endemic plants, such as the pau-brasil. It has been known since the colonization of Brazil and today, unfortunately, it is one of the species threatened with extinction.

What does endemic mean?

An endemic species is an animal or plant species that occurs only in a specific geographic area or region. Endemism is caused by physical, climatic, and biological barriers that effectively limit a species' range or cause its separation from the original group. When separation occurs over a long period of time, the isolated group undergoes natural selection that develops in its differentiation from other members of the species.
The isolated environment has different climate, soil, and water characteristics and uniquely selects the species that live there. Certain species can only develop in this environment. For this reason, the more specific the environment, the greater the endemism, which means the proportion of endemic species.
Native or indigenous species and endemic species are not the same thing. Both are native to a specific area, but native species can also occur elsewhere.

More than 25,000 Brazilian plants, algal, and fungal species are endemic. That's 55 percent of Brazil's total native species, which amounts to 46,900. The data come from the "Flora of Brazil 2020" study, coordinated by the Jardim Botânico in Rio de Janeiro.
Of the six Brazilian biotope types, the Atlantic Forest is the biotope with the highest number of species (17,150), followed by the Amazon (13,056) and the Cerrado (12,829). It is followed by the Caatinga with 4,963 species, the Pampa with 2,817, and the Pantanal with 1,682 species.

The pau-brasil, also known as pau-de-pernambuco, arabutã, ibirapiranga, ibirapitá, ibirapitanga, orabutã, pau-de-tinta, and pau-rosado, is a legume tree native to the Atlantic Forest in Brazil. Arabutã, ibirapiranga, ibirapitá, ibirapitanga, and orabutã are derived from the Tupi terms ïbi'rá ("wood") and pi'tãga ("red"). In some languages, such as French and Italian, the tree is called "pernambuco" because the Zona da Mata in Pernambuco was the place where the extraction of brazilwood began. Pernambuco was also the region with the largest occurrence of the tree, whose quality is so high that it determined the price in the European timber trade.
The tree reaches a height of 32.8 to 49.2 feet (10 to 15 meters) and has a straight trunk with dark gray bark covered with nodules, especially on the younger branches. The flowers appear in upright clusters near the top of the branches. They have four yellow petals and a smaller red one. The fruits are pods covered with long, sharp spines, which is to protect them from unwanted birds, as they would eat the fruits. They contain one to five disc-shaped seeds of brown color. The twisting of the legume when the seeds are released contributes to their wider distribution.
The brazilwood is found in the dense Atlantic Rainforest from the extreme northeast of Brazil to Rio de Janeiro, that is, in the states of Rio Grande do Norte, Paraíba, Pernambuco, Alagoas, Sergipe, Bahia, Espírito Santo, and Rio de Janeiro. It is on the endangered species list of the Brazilian Institute of Environment and Renewable Natural Resources and the International Union for Conservation of Nature and Natural Resources.
In 2020, the specimen now considered the oldest brazilwood was found, whose trunk has a diameter of 23.39 feet (7.13 meters) and is about 500 years old. The specimen is 9.28 feet (2.83 meters) thicker than the oldest brazilwood to date, whose trunk has a circumference of 14.1 feet (4.3 meters). The discovery was made by botanist Ricardo Cardim, who was contacted by farmer Manuel de Jesus, who found the brazilwood on his property in Itamaraju.

Arrojadoa is a genus of cacti that includes six species and several cultivars. It is named after the Brazilian botanist Miguel Arrojado Lisboa (1872-1932). The genus is found only in northern Brazil and is found in rocky places under shrubs that support its delicate stem. They are subtropical plants with very low frost tolerance.
The tender stems can be erect or spreading, growing up to 6.5 feet (2 meters) tall and about 0.78 to 1.96 inches (2 to 5 centimeters) thick. The pink or crimson flowers are night bloomers and tubular, 0.39 to 1.18 inches (1 to 3 centimeters) long and 0.19 to 0.39 inches (0.5 to 1 centimeters) in diameter. The fruit is berry-shaped with a maximum diameter of 0.59 inches (1.5 centimeters) and is pink or red when ripe.

Cassia leptophylla is a tropical tree species in the genus Cassia, located in Brazil. It is called the "gold medallion tree" and has yellow flowers that bloom intermittently throughout the year, producing seed pods. It can be recognized by its thin green foliage with glossy green leaflets. The fruit is a long, thin seed pod with four sides. The plant is native to southeastern Brazil. This tree is rarely used except as an ornamental or as a laxative, which is typical of the genus Cassia. The seeds and parts of the plant are poisonous if swallowed.

Euterpe edulis, commonly known as juçara, açaí-do-sul, or palmiteiro, is a species of palm in the genus Euterpe. It is used today mainly for palm hearts and is closely related to the açaí palm. The palm is cultivated for its fruit and high-quality palm hearts.
Although the species was once widely harvested in Brazil for its palm hearts, it is now rare in the wild and is no longer used commercially due to overharvesting in the past.

Drosera quartzicola is a species of the carnivorous plant genus (Drosera) and is found only in the Serra do Cipó in the state of Minas Gerais in southeastern Brazil. It is a perennial plant with leaves up to 1.57 inches (4 centimeters) long in a rosette. It typically grows in quartz sands surrounded by white quartz gravel, hence the specific epithet quartzicola. Drosera quartzicola grows in drier habitats than other Drosera species and blooms earlier in the rainy season from January to February.
Of the Drosera species found in Brazil, D. quartzicola is the rarest. At the time of its description in 2011, there were only four known populations with about 300 individual plants. These populations are located at elevations ranging from 3,609 to 4,429 feet (1,100 to 1,350 meters) and are either on the edge of the Serra do Cipó National Park or outside the boundaries of the protected area.

Quesnelia is a genus of plants in the Bromeliaceae family, a subfamily of Bromelioideae. The genus is named after Edouard Prosper Quesnel (1781-1850), a French businessman and botanist from Le Havre. The genus is native to eastern Brazil and contains 22 known species. The genus has two recognized subgenera: the type subgenus and Billbergiopsis Mez.

Buddleja brachiata is endemic to southern Brazil from Goiás to São Paulo, where it grows along rivers. The species was first described and named by Chamisso and von Schlechtendal in 1827.
Buddleja brachiata is a small shrub with light brown, finely striped bark. The leaves are ovate, can grow up to 4.7 inches (12 centimeters) long, and are tomentose on the underside. The white inflorescence is 3.9 to 7.8 inches (10 to 20 centimeters) long and consists of two rows of leafy-herbaceous branches.
The inflorescences of the species suggest a close relationship with B. hieronymi, B. interrupta, and B. iresinoides, which occur in the Andes. Their occurrence in Brazil is probably due to the much drier conditions that prevailed in the Amazon during the Pleistocene.

The unique fauna of Brazil

Brazil's diverse fauna delights visitors and is often one of the reasons for a Brazil trip. Some of Brazil's endemic species can be found in several Brazilian states, others only in one particular place. Experienced guides know exactly how to introduce you to Brazil's unique and diversified fauna.
Our nature tours are especially suitable for this. Our travel package "Natural Paradises of Brazil" is ideal for nature and animal lovers and allows you to discover the fauna and flora by boat, on foot, or horseback.
Spend a few days in the middle of the Amazon Rainforest in a lodge and get to know the diverse nature together with a local guide! Or discover the Atlantic Rainforest with its fascinating flora while hiking in the Organ Mountains near Rio de Janeiro!