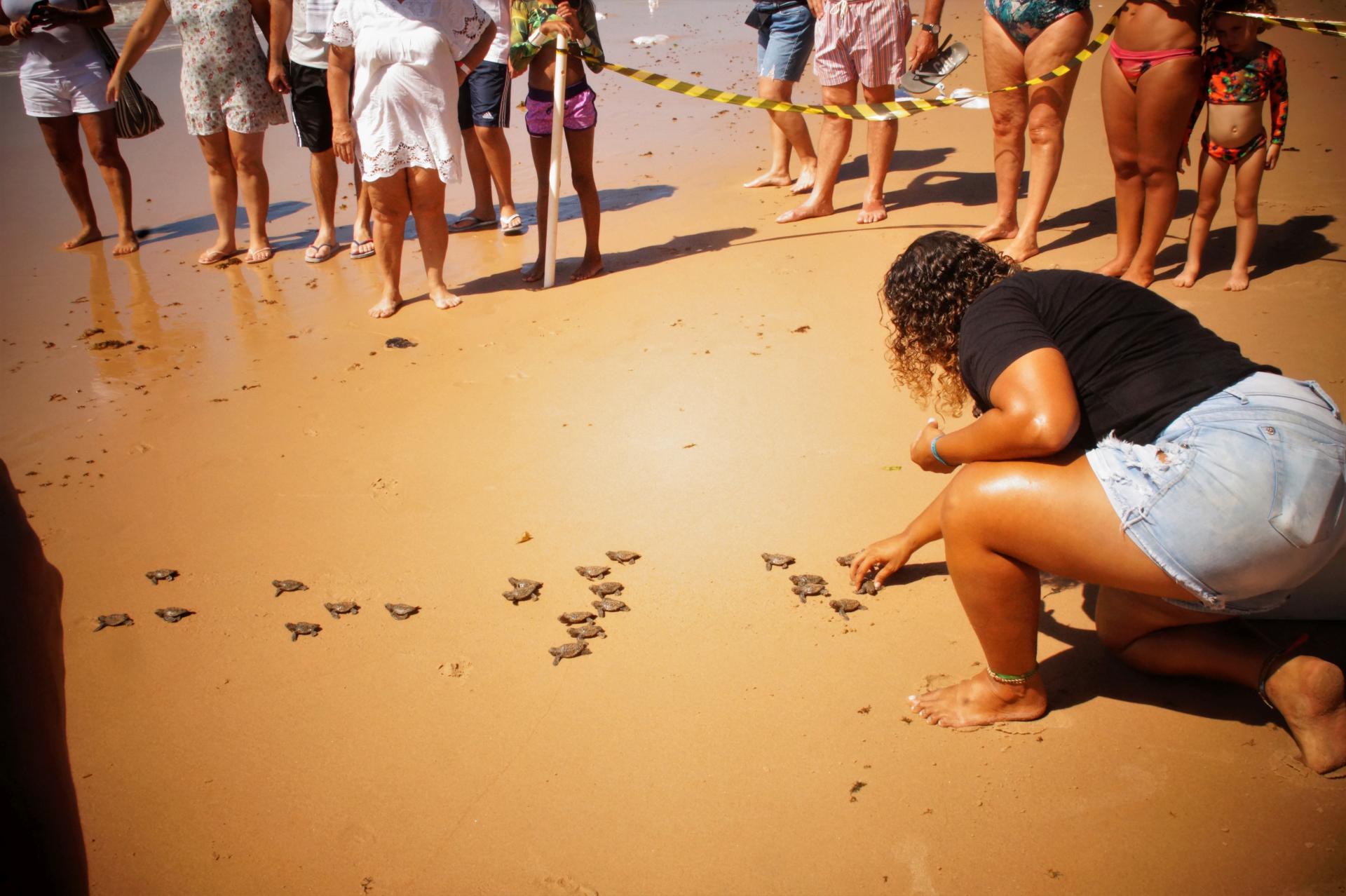 For many travelers to Brazil, a little dream may come true when they spot a wild turtle on one of the country's many beaches. This is still possible today due to the important work of the organization “Projeto Tamar”. The animals were almost extinct in the region a few decades ago. In the 1980s, for example, only 11,000 sea turtle eggs were found each year. That number has risen to 267,000 eggs a year. There are seven species of sea turtles worldwide, five of them are found in Brazil: the loggerhead sea turtle, the leatherback turtle, the olive ridged turtle, the green turtle, and the hawksbill sea turtle.

History of the origins of “Projeto Tamar”

Tamar is formed from the first two respectively three letters of tartarugas marinhas, which means “sea turtles” in English. There was no record of marine conservation work in Brazil until the late 1970s, although sea turtles were already on the list of endangered species. The cause of the numerous deaths of the animals were the accidental catches of deep sea and coastal fishing and the collection of eggs on the beach.

In 1977, a group of students from the Faculty of Oceanography of Rio Grande took part in an expedition to Rocas Atoll in northern Brazil. During the expedition, remote beaches and islands should be explored. On one of the nights, the students watched the fishermen who accompanied them kill 11 sea turtles at once. This shocking event was reason for the participants to raise awareness for nature and animal protection, a topic that hardly existed until then. “Projeto Tamar” was founded in 1980 by the Brazilian environmental agency IBAMA.

Work of the organization today

Today, the organization has projects along the entire coast of Brazil. A total of 23 locations in the eight Brazilian states Rio Grande do Norte, Pernambuco, Sergipe, Bahia, Espírito Santo, Rio de Janeiro, São Paulo, and Santa Catarina. In addition to protected stretches of beach where female turtles can lay their eggs, “Projeto Tamar” also has visitor centers. In the centers, the organization provides information about its work. The dangers posed by humans to turtles are shown as well as possible measures to protect the animals. The aim is to create greater environmental awareness among the public and to sensitize the local coastal communities. The largest visitor center is in Praia do Forte in Bahia.

Sea turtles as a research topic

Sea turtles cover extremely long distances in the sea. They are at home in various places at different stages of their life. For this reason, research on the animals is very difficult. Their way of life is partly still a mystery. Only when the female turtles lay their eggs on the beach it is possible to get close to the animals. Almost nothing is known about other stages, such as the time after hatching and the first few years.

All animals found by the “Projeto Tamar” researchers are given a small metal tag on the front fins. An identification number and the address of the organization can be found on the stamp. The registration program with the stamps exists since 1982. This way, they are able to learn more about the behavior and habits of the turtles, such as how fast the animals grow and how long they stay in a feeding area.

In the late 1990s, fishing was identified as the greatest threat to sea turtles. “Projeto Tamar” initiated the “Sea Turtles and Fisheries Interaction Program” in 2001. The aim of the project is to reduce the accidental catch and death of sea turtles in the fishery. The fishermen learn how to properly free turtles caught in nets or how to resuscitate a turtle that has become entangled in a fishing line underwater. In order to curb the turtle hunt, “Projeto Tamar” also supports the local fishermen in developing new sources of income, such as oyster farming.

A visit to “Projeto Tamar” on your next vacation in Brazil is definitely recommended! Most locations raise sea turtles in large pools so that you can experience the animals up close. Recovered turtles are also released into the sea which can be observed by interested visitors.