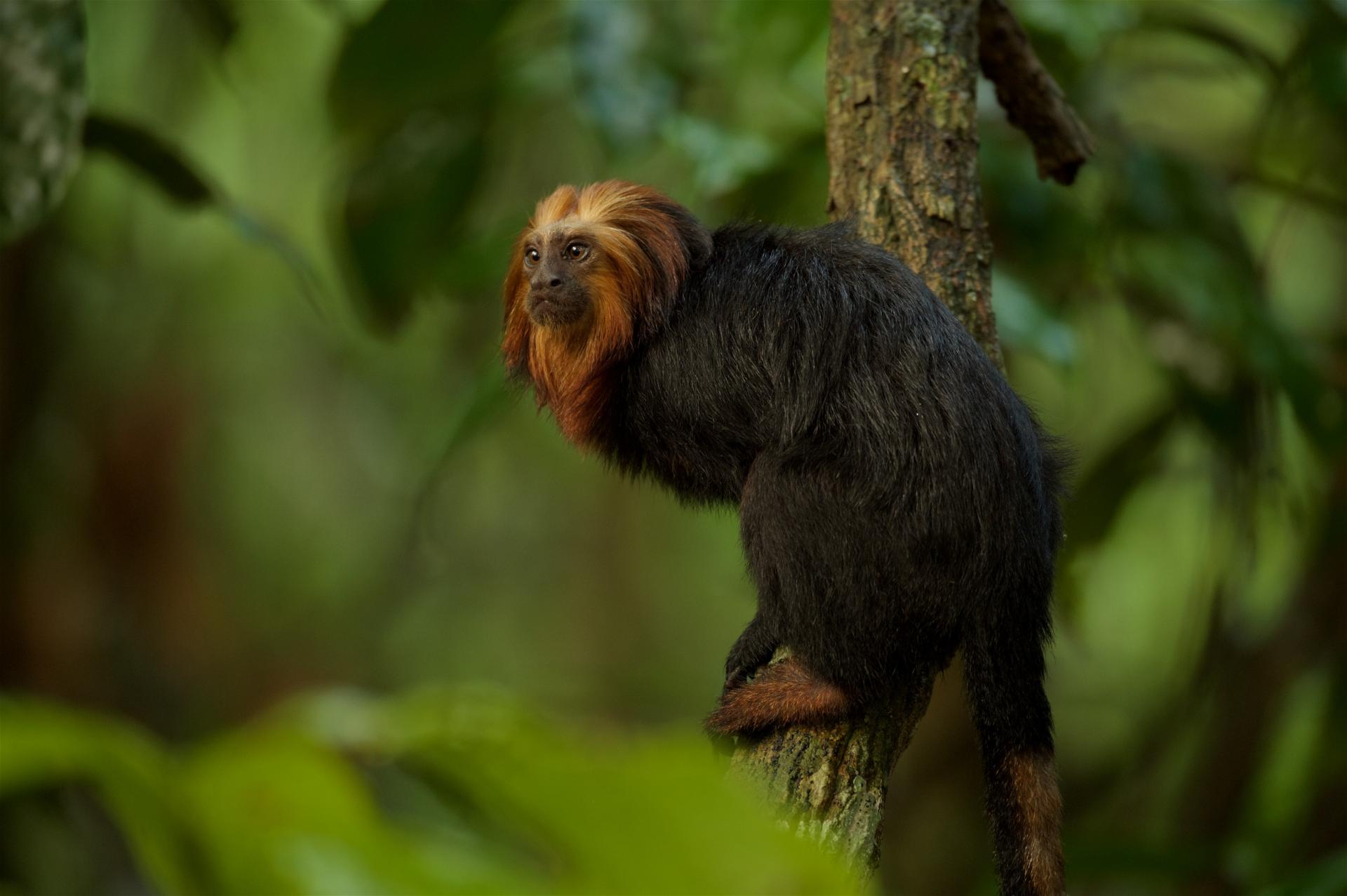 Nature lovers will have the chance to experience the impressive and exotic flora and fauna of Brazil’s many tropical ecosystems while visiting the country. The Amazon Rainforest, the Cerrado savannah, the coastal Atlantic Rainforest, the Pantanal wetlands, the Caatinga in the northeast, or the Pampas of the south are home to some unique animals that only exist in Brazil. The number of creatures is an indicator of the biodiversity and the physical state of a regions’s nature. These animals live in very specific areas and are specially adapted to the local environmental conditions. For this very reason, they are very sensitive to changes in their environment and, unfortunately, are particularly threatened by environmental destruction and the consequences of climate change.
On special expeditions to observe wild animals, like during an overnight stay in the Amazon Rainforest or on a canoe tour, Brazil travelers dive deep into nature. But even on a tour of one of Brazil's many cities, you will discover some of the country’s animal treasures.
We have decided not to mention some of Brazil’s well-known wildlife representatives below, such as jaguars, capybaras, anteaters, and caimans, because although they are specific to the ecosystem in question, they also live beyond the country's borders in other South and Central American countries.

The maned wolf - long-legged and peaceful

The maned wolf, or the Lobo-Guará in Portuguese, is most at home in the savanna landscape of the Cerrado. These long-legged animals with large fluffy ears and caramel colored fur can reach up to 4 feet (1.20 meters) long and weigh up to 66 pounds (30 kilograms). This makes them the largest wild dog in South America as well as the iconic representation of the Cerrado. The maned wolf lives solitarily and is only be found in pairs during the breeding season and to take care of their young.
The animals are of great ecological importance because, as omnivores, they eat many fruits, such as araticum and lobeira, thereby acting as seed dispersers.
The maned wolf species lives almost exclusively in Brazil. However, they are also found in Bolivia, Paraguay, and sometimes in Peru, Uruguay, and Argentina.
Since the vast savannas of the Cerrado are continually threatened by intensive agriculture, the habitat of the maned wolf is also in danger.

Spix's Macaw - The rarest of its species

The Spix's Macaw, Ararinha Azul in Portuguese, is a bird endemic to the Caatinga, found in the extreme north of Bahia all the way to the south of the São Francisco River. Extremely rare, they feed on buriti seeds, pine nuts, and many other fruits. They have bright blue plumage and gray and white feathers around their eyes.
Due to their beauty and lively character, they are unfortunately quite popular among animal collectors and the international pet trade. Combine this with a continual loss of habitat and the fact that their nests are often invaded by African bees, it is likely that this species will soon be extinct in the wild. However, because there are still potential habitats for this species to reside, the World Conservation Union (IUCN) classifies the Spix's Macaw as critically endangered.
Today, the Spix's Macaw can only be observed in captivity in special breeding facilities. Since the animals are monogamous, reproduction under these conditions is unfortunately very difficult.

Lion Monkeys - The unique inhabitants of the Atlantic Rainforest

All four species of lion monkeys, Mico-Leão in Portuguese, are endemic to the Brazilian Atlantic Rainforest and live in the states of Bahia, Minas Gerais, São Paulo, Rio de Janeiro, and Paraná. They include golden-headed lion monkeys, golden lion monkeys, red-legged lion monkeys, and the endangered black-headed lion monkeys.
These handsome animals have a lush and shiny coat that forms a sort of "lion's mane" around their head. The monkeys' face, on the other hand, is almost bald and they have long claws on their fingered hands and feet. They weigh up to 1.7 pounds (800 grams) and if you include their tails, they grow up to 31 inches (80 centimeters) long. The lion monkeys are active during the day, live in trees, and are sociable animals that live in family groups.

Brazilian diving ducks feed on small fish and insect larvae, which they hunt in crystal clear water. Pairs live monogamously in fixed territories and breed in rock crevices or steep banks. These ducks prefer rivers that run through dense forests, and they are extremely sensitive to external influences and the destruction of their natural environment. They are among the ten rarest and most endangered water birds in the world and are on the IUCN Red List. It is estimated that there are only 250 of these ducks left in existence, with most of them living in the Serra da Canastra in the state of Minas Gerais. Other populations are found in the region of Chapada dos Veadeiros in the state of Goiás, and along the rivers of Jalapão State Park in the state of Tocantins.
The presence of these particular animals is an indicator of an intact ecosystem and the region’s preservation of its biodiversity.

Among the group of amphibians endemic to Brazil, this small frog is one of the most poisonous. While other frogs secrete poisonous skin secretions, this is the first frog species capable of injecting the poison into another animal. Just a single gram of the frog's venom would be enough to kill 80 people or 300,000 mice, making it twenty-five times more poisonous by weight than that of the Brazilian pit viper.
The frog, which is relatively large at up to 2.4 inches (6 centimeters), is easily recognized by its striking light and dark spotted coloration and box-shaped head.
It was first recorded in the municipalities of Ilhéus and Igrapiúna in the southern part of Bahia in the northeast of Brazil. However, the animals also live in the forests of the states of Espírito Santo, Rio de Janeiro, Minas Gerais, and São Paulo.

The Tucano-Toco in the Savannah of Brazil

The giant toucan, or Tucano-toco in Portuguese, lives in central Brazil, in parts of the Amazon, and is widespread in the Cerrado and Atlantic Rainforest.
The animals are very curious, are not shy towards humans, and are therefore found in gardens and parks. Together with the macaws and parrots, they are one of the most iconic birds of South America. Their colors, as well as the shape and size of their beaks, are very striking and unmistakable. They have jet-black plumage on their wings and backside, a brilliant white bib, and bright redish-orange beaks.
Their diet consists mainly of fruits, insects, and small amphibians, but they also raid the nests of other birds, eating eggs and chicks.

Seeing the unique animals of Brazil in the wild

Brazil's particularly diverse wildlife delights visitors and is often one of the main reasons for a Brazil vacation. Some of the endemic species, such as the tufted monkey, are widespread and even live within major cities such as Rio de Janeiro and Salvador. Travelers should always take a look up at the power lines, which are usually used by the monkeys to cross the street. Blue macaws in the Pantanal, golden-headed lion monkeys in Bahia, or maned wolves in the Serra do Caraça are also easy to encounter. Experienced guides know the animals, their favorite places, behavior patterns, and the best times to observe them. Respecting nature and its animal inhabitants is of course the highest priority, so as not to influence the animals or their behavior.
Brazil travelers who are interested in observing wild life can choose their itinerary based on the best places for animal observation. Some options include the fazendas in the Pantanal, the jungle lodges in the Amazon, the Delta Americanas in Maranhão, the Fazenda Almada in Bahia, or the Ecolodge Itororó in the Atlantic Rainforest.