Dangerous Animals in Brazil - Which Ones You Can Find There? 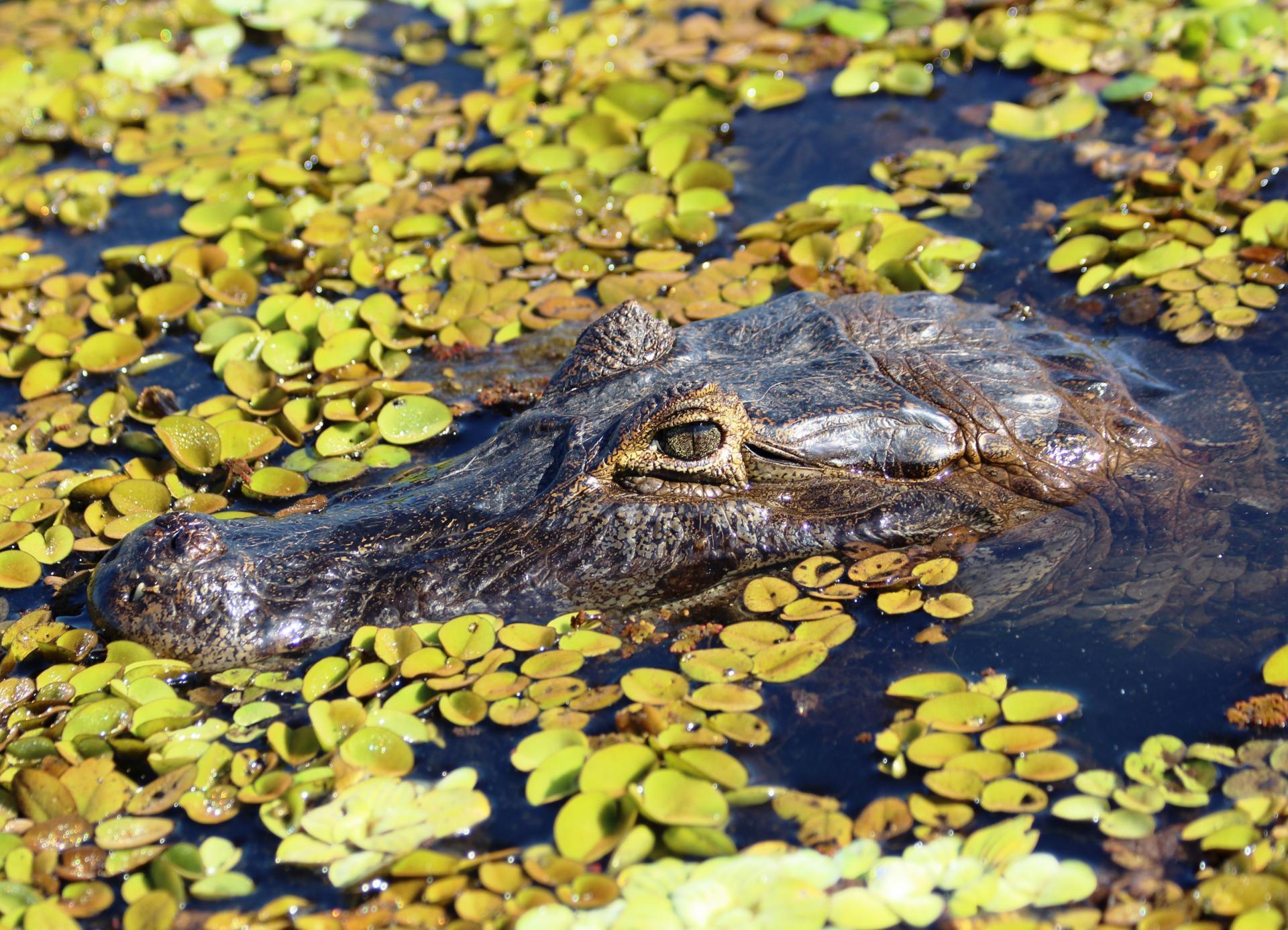 Hardly any other country has such a great diversity of species as Brazil. Scientists estimate that Brazil is home to 15 to 20 percent of all animal and plant species. As beautiful as Brazil is, as threatening it can be. Dangerous animals like piranhas, spiders, snakes, jaguars, and caimans can be found here. We will show you the animals that you should rather not encounter during your Brazil vacation.

Her bites are poisonous, she is aggressive and does not like to lose. The spider is also better known as a banana spider, as it sometimes travels in banana crates as a stowaway. Limbs often have to be amputated in bite victims if the antidote is not administered in the shortest possible time. The poison destroys the tissue and may cause respiratory paralysis.

The anaconda has no fangs, but we would still refrain from hugging it. The impressive constrictor snake waits in the water for its prey, bites firmly into it, and then suffocates it by tightly wrapping itself around it. On the menu are rodents, fish, caimans, or also capybaras. The loot is eaten with the head first and as a whole, which can last many hours. The anaconda is one of the largest snakes in the world and can be found in still waters and swamplands. The males are about 9.8 to 13.1 feet (3 to 4 meters) long, the females even become twice as big and are also considerably heavier.

The poison dart frog is probably one of the deadliest creatures of the Amazon rainforest. It occurs in swamps, lakes, moors, streams, and rivers. The color of the frog depends on its habitat and can be golden, red, blue, or green. The frog is the most poisonous in its family. It is believed to have enough venom to kill ten adults. The color is a warning sign for possible enemies. If one tries to eat it, it can cause skin swelling, nausea, muscle paralysis, and even death. It has been discovered that frogs in captivity are not poisonous. This is because frogs living in the wild take their poison through food, such as ants and termites. In the wild, the frogs have only one enemy, the Leimadophis Epinephelus. A special snake species that can also be found in the Amazon rainforest. It can eat the frog without being affected by the consequences of the dangerous poison.

Jaguars occur mainly in Central and South America. In former times, they were also found in the southern states of the USA. After lions and tigers, they are the third-largest cat worldwide. Their biting power is about twice as strong as that of a lion. Their fur is golden yellow with ring-shaped dark brown or black spots, which are supplemented by a point in the middle. Also, black jaguars have these spots, but they are usually only visible when looking at them in the sun. Most people think that the black panther is a separate species, but this is only a black leopard or jaguar. The jaguars resemble the leopards that live in Asia and Africa, but they are bulkier, have more muscular legs and their spots are much larger. Thanks to its adaptability, jaguars can live both in the tropical rain-forest and in dry-forests or swamp-areas. It is estimated that about 90 percent of the current population lives in the Amazon basin. The Jaguars' only natural enemy is humans. Jaguars like to eat large animals like armadillos and deer, but also fish and turtles. Due to their great biting power, they can crack the shell of a turtle. Jaguars sneak up slowly on their prey because they are not good sprinters.

Not only in Australia, South Africa, and the USA but also in Brazil you can make unwanted acquaintances with sharks while swimming. Especially in the northeast of the country and in the state of São Paulo, incidents occur frequently. Most of the time, the people themselves are responsible for this since sharks have to find other sources of food due to the destruction of their habitat. The bull shark not only romps around near the coast but also in freshwaters such as in river mouths or up to 2485 miles (4,000 kilometers) upstream in the Amazon. The notorious great white shark does not mind colder water, as it can maintain its body temperature up to 12 degrees higher than seawater. Therefore you can also find it in Uruguay or Argentina. Just as dangerous is the tiger shark, which however prefers it a little warmer. One finds it mainly in tropical and subtropical waters on the coasts of South America. Sharks possess several rows of sharp and pointed teeth. Only the first row is used for biting. The others are a constantly growing replacement. Thanks to their keen senses, sharks can not only smell very well but also hear well and see well in the dark.

Many horror stories have been spread about piranhas. Today, however, we know that only some species are dangerous, such as the red piranha, which is mainly found in the Amazon region. The 7.8 to 9.8 inches (20 to 25 centimeters) large fish is one of the most aggressive freshwater fish worldwide and usually feeds on fish and crustaceans. Just a few drops of blood are enough to attract piranhas. First, they fix the victim, bite, and then tear a piece of meat out of the victim by shaking it. Piranhas are resistant to many diseases and also eat carrion. They are therefore very useful in the Amazon region, as they eat sick animals and also carcasses and prevent therefore an epidemic from spreading in the sensitive ecosystem.

The black caiman can grow over 19.6 feet (6 meters) long and is one of the largest predators in South America. It occurs mainly on river and lakeshores and in floodplains of the Amazon basin. Because of their dark skin and the lighter head, they are called black caimans. For a long time, they were hunted because of their beautiful leather. Although they make a sluggish impression, they are fast in the water as well as on land. To their prey belong for example capybaras, lizards, birds, other caimans, and mammals. Before the victim knows it, he is grabbed by the caiman, dragged into the depth, and drowned. Since the animals are nocturnal, it is recommended to stay away from the shores in the evening hours.

The 24-hour ant, also known as the tropical giant ant or bullet ant, is one of the largest ant species worldwide. It is at home in the tropical rainforest of South and Central America. Its venomous sting is one of the most painful insect bites and the pain is described as burning alive. The ants can grow between 18 and 30 millimeters in size. Their sting contains the poison Poneratoxin, which is used to deter attackers and paralyze prey. After about 24 hours the pain subsides and the poison does not leave any damage in the tissue. The ant is not described as aggressive, except when defending its territory. It prefers to settle in the base area of large trees and feeds on insects and plant parts. The ant's venom is used by the indigenous Sateré-Mawé tribe for tests of courage during initiation rituals. During these rituals, up to 200 ants are sewn into a glove so that the poison sting is inside. During this initiation ritual, a boy must wear the glove for up to 30 minutes. If he bears the pain, he can reach high leading positions in the tribe.

As the name already says, this bat species has much in common with the bloodsucking creatures. The common vampire feeds on animal blood. Humans do not have to fear their bloodthirst, but the transmission of dangerous diseases such as rabies. The bats do not have high standards when choosing their habitat and can be found in the South American tropics and also at altitudes of up to 1.49 miles (2,400 meters). They have a very distinctive social behavior, clean each other's fur, and supply other hungry conspecifics with blood. Since they can survive only a few days without blood, it is estimated that over 80 percent of the bats would die without this helpfulness. To its victims belong mainly, horses, donkeys, cattle, game animals, but also birds. At a place that is as hairless as possible, they shave away the hair or feathers with their teeth, bite out a piece of skin and then lick up the blood that emerges from the wound.

Do not let this stop you from a trip to Brazil. Just watch out for possible dangers and follow the instructions of your guide, then you can enjoy your vacation in peace!