Manaus – A metropolis in the middle of the rainforest 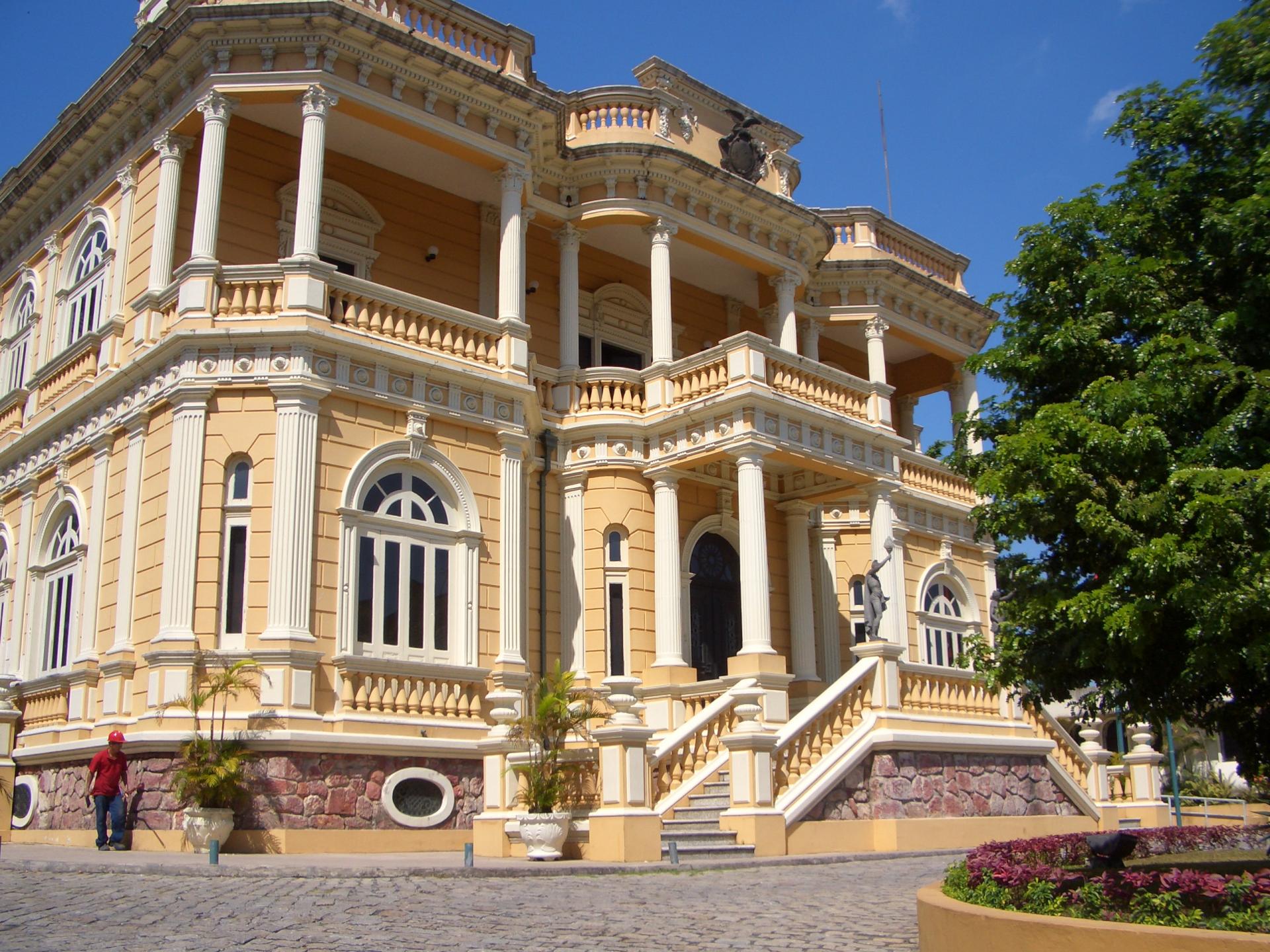 Manaus. The name alone sparks jungle fever, the feeling of adventure and the pristine Amazon Rainforest, that a trip to Brazil promises.
But this idea of a tropical city in the jungle far from the rest of the world corresponds only partly to reality. Although it can only be reached by ship, plane or adventurous roads, Manaus is now an international metropolis, industrial center and the most important commercial center in northern Brazil. In 2020, the capital of the state of Amazonas was home to about 2.2 million inhabitants, living on the banks of the world's most water-rich river.
During a trip to Brazil, the path of many travelers leads to this legendary city to experience the Amazon. This is where the boat expeditions on the Amazon or Rio Negro begin, and the surrounding area is home to many of the rainforest lodges and jungle hotels.

In the heart of the Amazon, at the confluence of Rio Solimões and Rio Negro

Manaus is located far from other large cities in the heart of the Amazon and can only be reached by unpaved jungle roads, boat or plane. The nearest city to the north is Boa Vista in the state of Roraima, 750 kilometers away. To the south, it is 890 kilometers to Porto Velho in the state of Rondônia and to Santarém it is 1 hour by plane or 2 days by boat to the east. If you look to the west, you can let your gaze wander on the map for a long time, until only with Iquitos in Peru another large city does appear.
Shortly before Manaus, the Rio Negro, whose headwaters lie in Colombia and Venezuela, and the Rio Solimões, which has its source in the Andes in Peru and Ecuador, meet. This confluence not only creates the mile-wide stream of the Amazon, but also offers the amazing sight of a two-colored river. This is because the water of the Rio Negro is highly acidic, as it flows over depleted and sandy bedrock on its way, resulting in an almost black coloration of the water. The Rio Solimões, on the other hand, has a brown, turbid coloration as it carries a lot of sediments and suspended solids. The different chemical compositions, as well as differences in temperature and flow velocity, mean that the waters do not mix. For more than 30 kilometers, the two waters flow side by side, and Brazil travelers can admire this natural spectacle of the Encontro das Águas during a crossing of the Amazon. Amazon river dolphins often cavort in the eddies, and with a bit of luck can be seen here hunting for fish.

Manaus - The "Paris of the Tropics"

The history of Manaus begins, as in so many other cities in South America, with the settlement and conquest of the country by Europeans. In 1669, a Portuguese base was established in what is now the city, and gradually more people settled around it. It was not until the period of revolts against the Portuguese colonial power in the first half of the 19th century that the city of Manaus received its name and was declared a city in 1848.
In the following years, the caoutchouc trade developed and many people looking for work came to the city, which went from being a village to a big city in a few years. The ensuing caoutchouc boom brought immense wealth and prosperity to the city, and tramways and magnificent buildings such as the Teatro Amazonas were built. The rapid wealth coined the term "caoutchouc barons", plantation owners who became known for their exuberant and extravagant lifestyles.
But by 1910, this period had already come to an end, as caoutchouc was now being produced in other regions of the world, such as Malaysia and Indonesia. Manaus, the former "Paris of the Tropics", visibly decayed and the former splendor can now only be seen in a few buildings in the old town.
But after the city was declared a free trade zone in 1957 and several companies settled there, Manaus has since experienced a second rapid economic growth. Today, it is the fourth richest city in Brazil after São Paulo, Rio de Janeiro and Brasília. The industry of the Zona Franca de Manaus is known, among other things, for the production of electrical appliances, motorcycles and information technology.

People of the Amazon

Even the name of the jungle metropolis bears witness to its indigenous identity. Manaus means "mother of the gods" in the language of the Manaós, who once inhabited the area. Their leader Ajuricaba became a symbol of indigenous resistance against Portugal, as he united several indigenous tribes and led heavy battles in the Amazon against the Portuguese conquerors. Unfortunately, that bravery and martial prowess doomed the Manaós, as 1819 was the last time survivors of the tribe were recorded.
Other of the surrounding indigenous tribes were not so warlike, coming to terms with the Europeans and even marrying. The Caboclos ethnic group that emerged from these connections now represents the largest group of the local population in Manaus. Outside the city, they live mostly in small village communities along the banks of the Amazon and its branches.
With the caoutchouc boom, people from many different countries came to Manaus. Immigration still determines the colorful and multifaceted streetscape of the city today. For the people of Manaus, the caoutchouc boom and the rapid industrial growth of the last decades had far-reaching consequences. Many young people and families came and still come from remote villages throughout the Amazon region to seek work here and ensure schooling for their children. Economic crises and upheavals therefore quickly lead to the impoverishment of the working-class neighborhoods and thus, unfortunately, to rising crime rates.

To travel to the Amazon on a Brazil vacation, Manaus is the ideal starting point. But Brazil travelers should not only be impressed by the nature of the Amazon but also get to know the interesting and lively city, which is so full of contrasts and combines modern times, history and indigenous culture of Brazil.
Among the most famous sights are the imposing buildings from the time of the caoutchouc boom, such as the Teatro Amazonas opera house, the Rio Negro Palace and the Palace of Justice.
To get acquainted with the exotic goods, fruits and foods, the historic market hall offers an impressive smell and taste experience. The neighboring port facilities along the Amazon are usually crowded with regional wooden boats, used for transportation, fishing, as houseboats or passenger's vessels. Here, merchants carry fruit, fish and other exotic products to the adjacent market halls, families lie in hammocks on the boats waiting for departure, fishermen cast their nets and the air is suffused with the aroma of Tacacá soups. Across the street, the old town of Manaus begins directly, with the famous opera house, small alleys and colorful houses. Just a few minutes walk away is the modern shopping street with classic stores and flying vendors offering everything from freshly squeezed orange juice and hammocks to cell phone accessories for sale.
All of this adds up to a multi-faceted picture of the Amazon and its inhabitants. A visit to Manaus, the tropical metropolis in the middle of the rainforest, should therefore not be missing on any Brazil vacation.