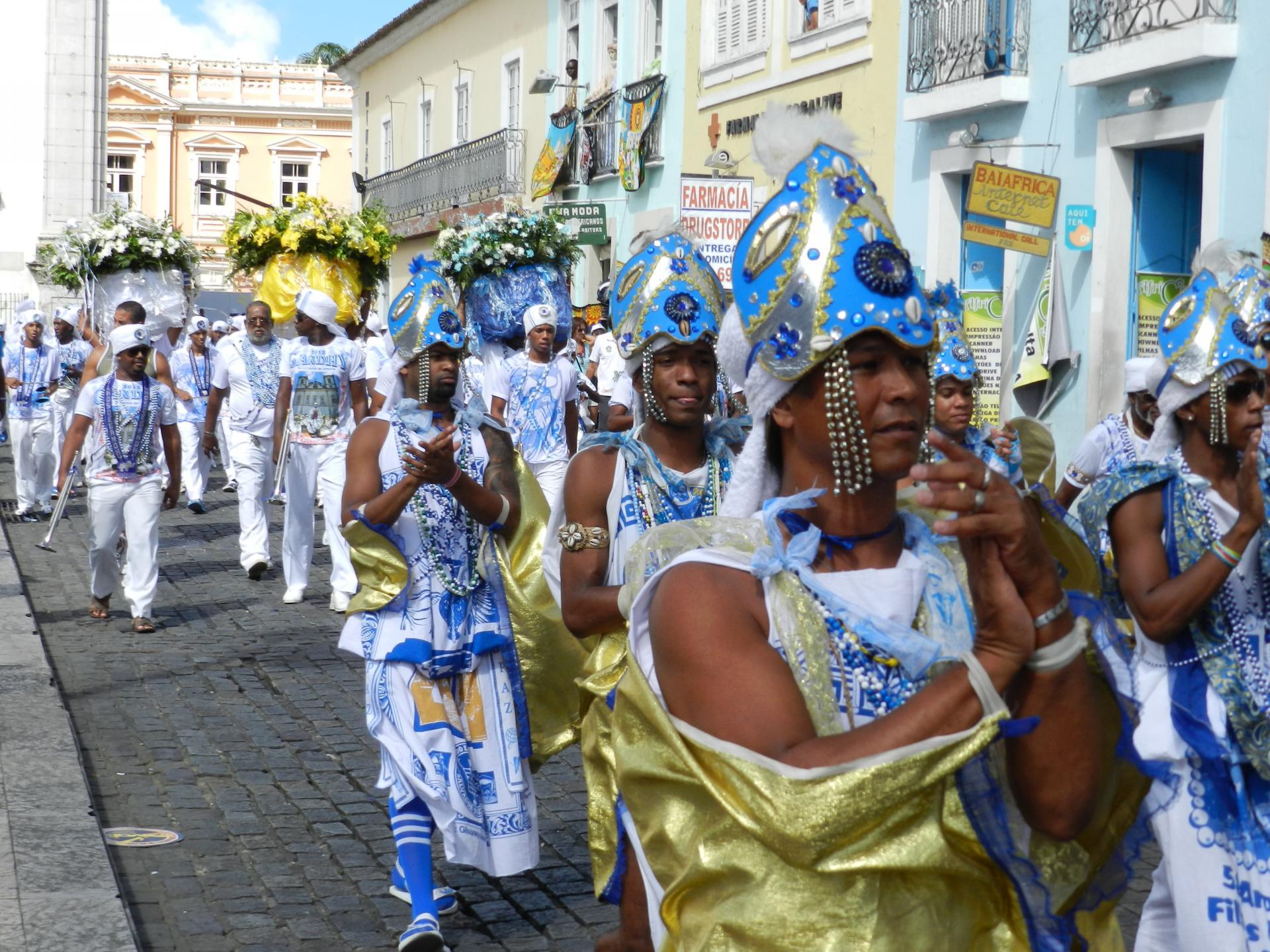 Other countries, other customs. Who does not know this? You come to a new country and have to get used to other traditions and cultures first. Italy, for example, is known for its culinary traditions, Sweden for its Midsommar celebrations, England for its teatime, Spain for its bullfights, and America for Thanksgiving. These are all traditions that are part of our culture when we think of these countries. Do you know the most famous traditions in Brazil? The first thing that probably comes to your mind now is samba, caipirinha, and carnival. But this is by far not the only thing you can find in Brazil. Read on to get to know the most famous traditions of the different Brazilian regions and prepare yourself for your next Brazil trip.

Brazil is not only the largest country in South America but also has a lot to offer culturally and traditionally. Traditional costumes, culinary delicacies, religious festivals, and many other traditions. Brazil's culture and traditions were influenced by the European colonial masters, the indigenous population, and the African slaves. Especially later, Italian, German, Japanese, Polish, Arab, and other immigrants contributed to Brazil's cultural diversity.

The North of Brazil

The most famous traditional festivals of the north are the Festa do Boi-Bumbá and Círio de Nazaré. The Boi-Bumba Folklore Festival takes place every year in June in Parintins, a small town on the edge of the Amazon. The festival celebrates the resurrection of an ox. Legend has it that a pregnant slave woman had such an appetite for ox tongue that her husband killed his master's ox. However, the husband later managed to revive the ox. The festival is known under different names: Festa do Boi-Bumbá, Bumba-meu-Boi, or Festival Folclórico de Parintins. During the festivities, various dances typical of the region are performed, such as Xaxado, Quadrilha, and the Boi-Bumbá, which have indigenous influence.

The Catholic procession Círio de Nazaré in Belém is one of the most important religious festivals of the north. The faithful walk through the streets of Belém in honor of the Nossa Senhora de Nazaré.
Other traditions of the north are festivals like Folia de Reis, Festa do Divino and dances like Carimbó, Congo and Congada.

The influence of the indigenous population is also strongly felt in the cuisine of the north, which is based on manioc and fish. Other typical foods are carne de sol (heavily salted beef that is exposed to the sun for one or two days), tucupi (soup made from cooked manioc), tacacá (a kind of soup made from the pressed juice of bitter manioc), and jambu (a herb).

The Northeast of Brazil

The northeast of Brazil attracts you not only with its beautiful landscape but also with its rich culture and many traditions. African influences can be found here especially in music, religion, and gastronomy. The most famous festival is definitely the carnival. Every year it attracts thousands of people, who celebrate the famous street carnival of the northeast in high spirits.

The Festas Juninas are one of the most important celebrations after the carnival and are celebrated every year in honor of the three saints São João, São Pedro, and Santo Antônio in June. To the rhythm of Forró, typical of the Northeast, they are celebrating with dances as quadrilhas and typical São João dishes.
Other typical traditional dances and celebrations are Caboclinhos, Ciranda, Coco, Terno de Zabumba, Marujada, Reisado, Cavalhada and of course Capoeira.

One of the most important religious traditions is the Festa de Iemanjá, which takes place annually on February 2nd. The believers gather in Rio Vermelho in Salvador in the early morning hours and give their offerings for Iemanjá, the goddess of the sea, into the sea.
Another religious tradition is the Lavagem da Igreja. Here the steps in front of the church are washed with scented water by traditionally dressed baianas. They are accompanied by rhythms and songs of African origin. The most famous Lavagem da Igreja is the Festa do Senhor do Bonfim, which takes place annually in January on the second Thursday after Epiphany.

Also, the culinary traditions of the northeast leave nothing to be desired. Among the typical dishes are Carne de Sol, Acarajé (fried balls of ground beans), Vatapá (a kind of puree), Tapioca, Moqueca de Peixe (a stew made with fish, coconut milk, palm oil, and tomatoes), and many other delicacies.

The culture and traditions of Central and Western Brazil have been influenced by the indigenous population, the Paulistas, miners, gaúchos, Bolivians, and Paraguayans. The capital of Brazil, Brasília, is located in the Distrito Federal and stands out for its buildings. The buildings like the Congresso Nacional, the Catedral de Brasília, or the Palácio da Alvorada are internationally known.
About 140 kilometers from Brasília is the small town of Pirenópolis in the state of Goiás. One of the most important cultural festivals of the region takes place here every year: the Festa do Divino, which celebrates the appearance of the Holy Spirit before the Apostles.
Other traditional and typical cultural events of the region are Cavalhada and Foraréu in Goiás State and Cururu in Mato Grosso and Mato Grosso do Sul.

Typical of this region are various rice specialties like Arroz com Pequi or Arroz Carreteiro, Sopa Paraguaia (a kind of corn bread), Pamonha (a paste made of sweet corn wrapped in a corn leaf and cooked), and fish from the Pantanal.

The Southeast of Brazil

Among the most important cultural festivals of the region: Festa do Divino, Festejos da Páscoa e dos Santos Padroeiros, Congada, Cavalhadas, Batuque, Samba de Lenço, Festa de Iemanjá, Folia de Reis, and of course Carnival. Carnival in Rio de Janeiro is certainly one of the most famous traditions of the Brazilian Southeast. Everyone has probably heard about it at least once. Thousands of people come together to watch the parades of the samba schools in the Sambódromo da Marquês de Sapucaí.
Not far from Rio is the city of Paraty, where the "Feira Literária Internacional de Paraty" takes place.
Another famous festival of the southeast is the "Festa do Peão de Barretos", which has been held in São Paulo since 1956. The main attractions are rodeo and music shows.

The cuisine of the Southeast is strongly influenced by the indigenous population, slaves, and European and Asian immigrants. Among the culinary traditions are Pão de Queijo (cheese balls), Feijoada (bean stew), Aipim Frito (fried manioc), and Cuscuz Paulista (a kind of couscous made from corn with eggs, olives, tomatoes, sardines, and other ingredients).

The South of Brazil

In the south of Brazil, traces of European culture are increasingly found, due to the Portuguese, Spanish, and above all Italian and German immigrants. In Caxias do Sul in the state of Rio Grande do Sul, the Festa da Uva is held every two years. The visitors can taste cheese, grapes, and different Brazilian wines.
Another very famous tradition is the Oktoberfest in Blumenau in the state of Santa Catarina, which has been held every year at the beginning of October since 1984. It is now the second-largest Oktoberfest in the world and attracts countless visitors and tourists.
Other traditions of the south are: Fandango, a Portuguese tradition, Tirana and Anuo originally from Spain, Festa de Nossa Senhora dos Navegantes, Congada, Boi-de-Mamão, Dança de Fitas and Boi na Vara.
Southern culinary traditions include chimarrão (mate tea), pirão de peixe (a kind of cassava porridge), barreado (a stew that owes its name to the clay pot sealed with clay), and wine.