Superfood from Brazil – Fruits of the Amazon 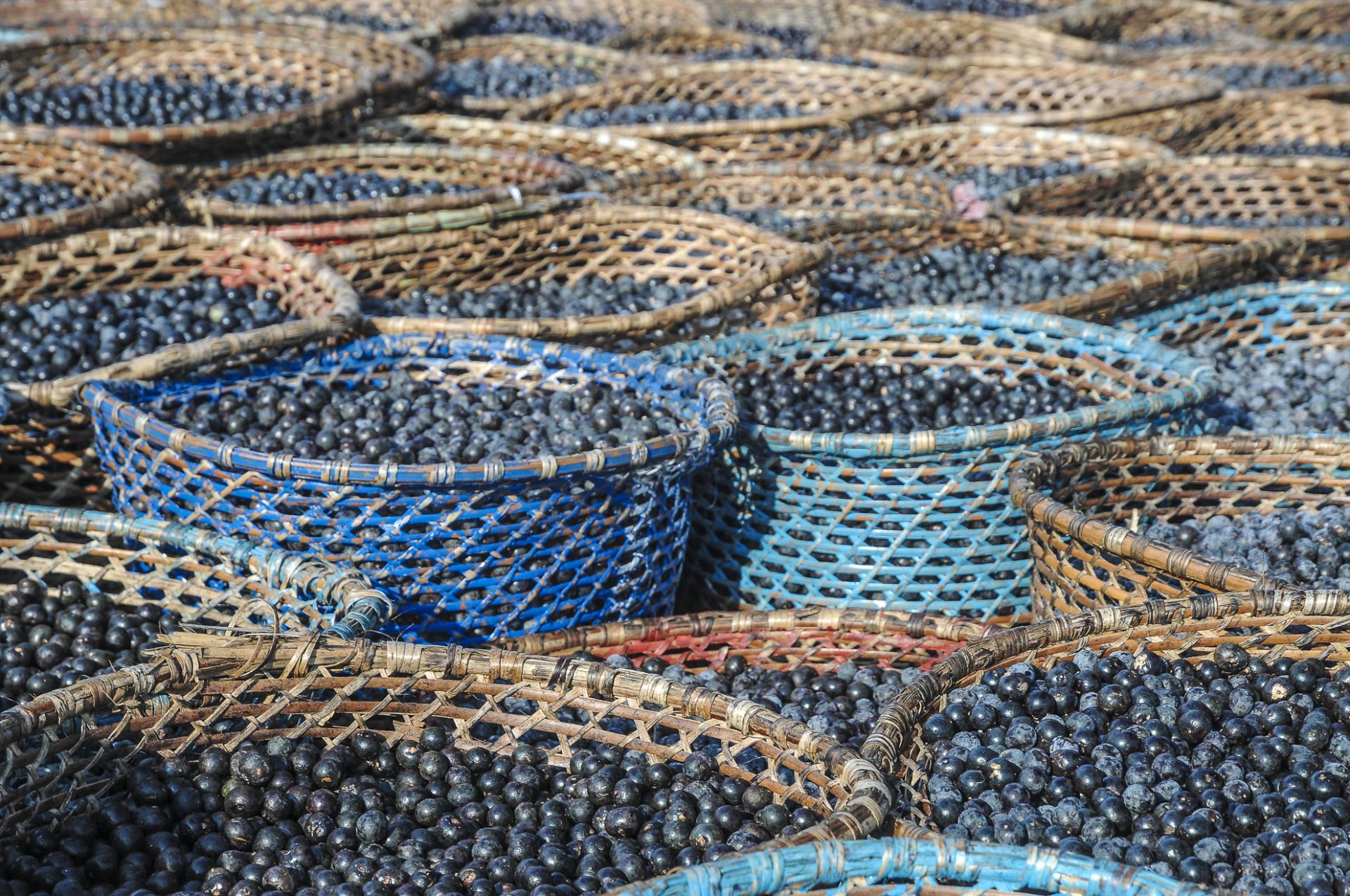 The Amazon region offers not only unique nature, tropical forests, and abundant wildlife, but also culinary highlights, exotic fruits, and diverse taste experiences. Brazil is one of the countries with the greatest variety of fruits in the world. In the Amazon, it is estimated that there are more than 200 edible fruits, accounting for more than 40 percent nationwide.
Brazil travelers who want to get to know the country on a round trip usually also come to the Amazon and should be surprised by the fruits of this impressive region.
Some of them are very popular and are also grown in other regions of Brazil, such as guaraná, cacao, or cajú. But many fruits are practically unique to this northernmost region of Brazil.
Due to their high content of vitamins and trace elements, some are already known worldwide as superfruits or superfoods. But also well-known top chefs have discovered these rarities and transformed them into sophisticated culinary creations.

Açaí is one of the most popular palm fruits from the Amazon, sold throughout Brazil, but mostly produced in northern Brazil, in the state of Pará.
The pulp is used in the preparation of juices, wines, sweets, liqueurs, and ice cream. The açaizeiro is a typical tropical palm, found in the wild in the forests.
The small dark fruits grow in bunches and, after harvesting, are carefully beaten in a cylinder so that the pulp separates from the kernel. The seeds, by the way, can be found in almost all craft markets and traditional jewelry stores strung as beads and usually brightly colored.
Açaí berries are known for their nutrient-rich pulp, which is sold worldwide in processed drinks, ice cream, and capsules. Few know that in addition to the fruit, extremely tasty palm hearts are also obtained from the palm.
Outside the Amazon, açaí is almost always eaten sweet, mixed with syrup or sugar and water. Depending on preference, it is eaten in a cup or bowl with cereal, powdered milk, fruit, sweet condensed milk, or even chocolate sauce. For the natives of the Amazon, however, this is very unusual. Here, açaí is consumed pure or with salty dishes and eaten with farinha, a coarse-grained cassava flour, and grilled fish, for example.
Because açaí changes flavor after thawing and very quickly becomes sour, it is only available in pure form in the Amazon region and near the areas where it is grown.
Brazilian travelers should not miss this taste experience and look for it in the markets of Belém, Santarém, or Manaus.

Guaraná is a typical fruit of the Amazon, found in Brazil and Venezuela. The fruits are small, red, and contain white pulp with large amounts of guaranine. Due to its stimulating property, similar to caffeine, guaraná is used as a syrup or powder for making soft drinks and smoothies.
The fruits of the guaranazeiro grow in clusters. The tree can reach 33 feet (10 meters) in height and has large, white, and fragrant flowers. The stimulating property of guaraná was appreciated by indigenous people long before the arrival of the Portuguese. The ingestion of guaraná increases physical resistance, helps in mental and muscular efforts, and reduces fatigue.
The processing of the fruit syrup began in Brazil in 1905 by Luiz Pereira, a doctor from the town of Resende in Rio de Janeiro. Shortly after, in 1906, "Guaraná Cyrilla" was launched by a soft drink factory in Santa Maria in Rio Grande do Sul. Antarctica's guaraná soft drink has been available since 1921. Today, the largest guaraná producer in Brazil is the state of Bahia.

This fruit is known to have the highest content of vitamin C, with a concentration up to 40 times higher than in oranges. It has an antioxidant effect and is used in juices, ice creams, and jellies.
The consumption of camu-camu offers many health benefits. These include strengthening the immune system, having an anti-inflammatory effect in diseases such as arthritis, and regulating blood pressure and blood sugar levels.

Cupuaçu is the fruit of the cupuaçu tree, typical of the Brazilian Amazon, which is closely related to the cacao tree. The tree can grow between 33 and 49 feet (10 and 15 meters) tall and requires firm, fertile soil with a good water supply for its development.
The fruit has a spherical shape, is up to 9.8 inches (25 centimeters) long, and can weigh over 2.2 pounds (1 kilogram). It has a hard, smooth, and dark brown skin surrounding a white and acidic pulp and many seeds.
Cupuaçu is rich in fiber, vitamins A, B, and C, and minerals such as calcium, phosphorus, and selenium. It has antioxidant, diuretic, anti-inflammatory, and sedative properties.
When consumed regularly, cupuaçu can help with weight loss, support the gastrointestinal system, lower cholesterol, slow aging processes, and strengthen the immune system.
The fruit is used to make juices, sweets, ice cream, wines, liqueurs, and chocolate. In addition, the oil is extracted and also used in the cosmetics industry.

The oval-shaped palm fruit with yellow-greenish skin has a fibrous pulp and a taste similar to apricots. It is very rich in vitamins A, B, and C, and is also one of the few fruits that contain omega 3. In the northern region, tucumã is often used to prepare juices or as a filling for tapiocas and sandwiches.

Bacaba-Açú - It doesn't always have to be açaí

Native to the Amazon, the palm produces oily fruits that grow on bushes weighing up to 17.6 pounds (8 kilograms). The oil from the palm is usually bottled, sold at market stalls, and used in various culinary preparations. In addition, the fruits of the bacaba palm can be used in the production of wine and ice cream.

Umari - Traditional Fruit of the Amazon

The umari fruit has a remarkable flavor and is rich in vitamin A and vitamin E, which helps neutralize free radicals in the skin. Umari is less known outside the Amazon and is grown and harvested almost exclusively by traditional small farmers. Therefore, it can only be found during the harvest season from December to February in some Manaus markets or at small roadside stalls. It is used by locals to prepare flour, cakes, butter, puddings, and pies.

Cajú - More than the cashew nut

Cajú is often considered the fruit of the cajú tree, although it is only a pseudo-fruit. This is because the fruit consists of two parts. The actual fruit is kidney-shaped with a hard shell and a corrosive and sticky resin surrounding the nut. Therefore, travelers should not attempt to open the raw fruit with their teeth. The flower stalk forms a pseudo-fruit in the shape of the pear-shaped cajú apple. This grows up to 7.9 inches (20 centimeters) in size, has thin yellow or red skin and white, fibrous, and very juicy flesh.
Cultivation is widespread in northeastern Brazil. The trees can be found outside the inner cities in most gardens and parks. The harvest season lasts from August to January, depending on the region.
In addition to eating pure fruit, cajú can be used in the preparation of juices, syrups, candies, dried fruits, ice cream, and liqueurs. The nut is sold roasted as a snack and exported packaged almost all over the world. The nuts are known outside Brazil as cashew nuts, as this is close to the actual pronunciation of the word cajú in English.
The juice of the fruit is bottled industrially in concentrated form and sold in supermarkets throughout the country.
Cajú is rich in vitamin C and iron, strengthens the immune system, and protects cells from free radical damage. Incidentally, the bark of the tree is used to treat aphthae and throat infections. The leaves support wound healing in skin injuries.

The name bacuripari comes from the Tupi-Guarani language and means "fruit that falls". It is also known as bacuri de bico, bari-bari and bacupari-açú. The fruit is highly valued by the majority of the population in the Amazon and is rich in fructose, vitamins, and pectin. Some studies investigate the effect of fruits in the fight against cancer diseases.
The fruits can be smooth or somewhat rough, spherical or ovoid, and of different sizes. They ripen from October to February and can be found in many markets.
The yellow fruits have white, acidic flesh and a strong odor, but are pleasant to taste. Bacuripari is usually eaten plain but is also commonly used in desserts and juices.

Culinary Journey to the Amazon - Discover and Taste

Brazil's great variety of fruits impresses visitors again and again. Due to its impressive nature, the Amazon region is a desired destination and place of longing for many travelers on a Brazilian vacation. The exotic and flavorful fruits of the region complete the experience. They are best found in the markets, at street stalls, in small traditional restaurants, or even in the gardens of accommodations and lodges. Be it during a visit to Manaus, Belém, Ilha de Marajó, or the fishing village Alter do Chão. It is worth keeping your eyes open for it and being surprised by the fruits of the Amazon!