To help you plan your trip to Canoa Quebrada, we have summarized the following information on the regional climate and ideal times to travel.
Canoa Quebrada is located on the Northeastern coast of the country in a region dominated by dry tropical climate, with a short rainy season from February to May. Rainfall can average around 250 mm (9.8 in). Throughout the long dry season of the remaining months, precipitation drops to almost zero in Canoa Quebrada.
Temperatures remain relatively constant with average highs of over 30 °C (86 °F). At night it cools down only slightly and the thermometer rarely drops below 20 °C (68 °F).
Nonetheless, the climate is generally perceived as pleasant by travelers due to the fresh sea winds. The sun shines very intensely near the equator and a beach umbrella would certainly come in handy. It is especially recommended to avoid direct sunlight at midday. 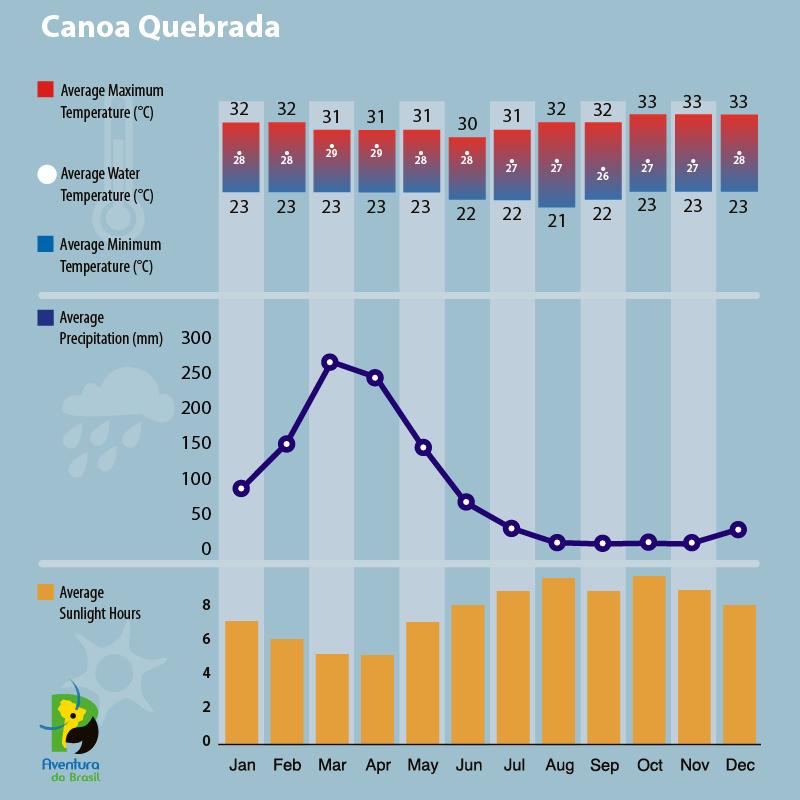 You can plan a trip to Canoa Quebrada year round. The average water temperature is between 26 °C and 29 °C (79 °F to 84 °F), and the outside temperature climbs over 30 °C (86 °F) every day, although even at night it rarely gets colder than 20 °C (68 °F). The short rainy from February to May can bring strong rainfall and thunderstorms. The remaining months of the year are definitely more favorable for a beach getaway. From July to December there is almost no rain at all. When that is combined with 9 hours of daily sunshine, nothing stands in the way of an extensive beach getaway.