Climate and Best Time to Visit Barra do Garcas, Brazil

For optimal itinerary planning, we have summarized below some information about the regional climate and ideal times to travel to Barra do Garcas.
The surrounding region of Barra do Garcas is located at the beginning of the Amazon Basin, about 320 m (1,050 ft.) above sea level in the Midwest of Brazil. The tropical climate is based on two seasons: the rainy season and the dry season, with temperature differences playing a barely noticeable role.
The thermometer reaches 30 °C (86 °F) during the day year round. It gets hottest between August and November, at the beginning of the rainy season. The coolest time of the year, yet with daytime temperatures of at least 31 °C (88 °F), comes during the rainy season between December and March. Nighttime temperatures are subject to greater fluctuations, which reflect the continental steppe climate. During the driest months, the starry night sky complicates heat storage. The thermometer then drops to about 15 °C (59 °F) or lower. During the rainy season there are daily tropical cloudbursts and thunderstorms, causing the amount of precipitation to reach up to 330 mm (13 in) at the season’s peak in January. During the dry months from April to September, however, very little or no precipitation is expected. 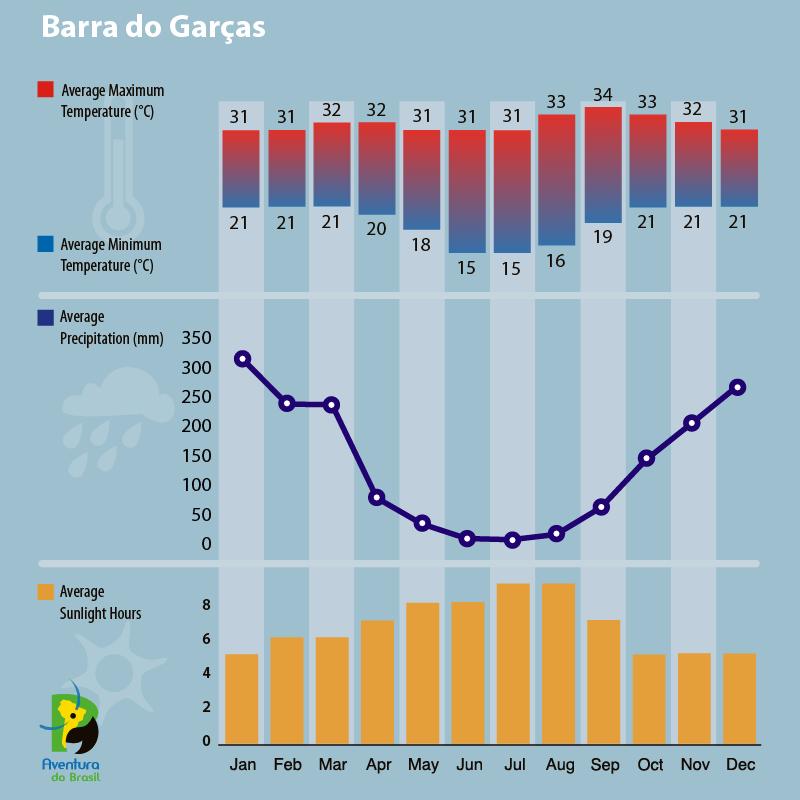 For a visit to Barra do Garcas, combined with a hike through Serra do Roncador and a visit to the waterfalls, we recommend planning your trip during the dry season and transition to the rainy season between April and October.