Climate and Best Time to Visit Serra do Roncador, Brazil

Below we have summarized some information about the weather in the Serra do Roncador region, so that you can plan your trip accordingly. The tropical climate along the mountain range, spanning 800 km (497 mi) long and extending north to south, varies according to latitude. To the north it is very similar to the ever humid Amazon climate, while in the south it reflects the climate of the Cerrado with a rainy and dry season.
From April to September it hardly rains at all with less than 50 mm (2 in). When the rainy season begins, tropical cloudbursts and thunderstorms occur. Precipitation reaches its peak in December and January with over 300 mm (11.8 in).
Daily high temperatures can be assumed to surpass 30 °C (86 °F) year round. Especially in September and October, it can become very hot. At night the temperatures are also usually above 20 °C (68 °F). Only from May to September, when there are no clouds in the sky, does the landscape cool down and some nights the thermometer drops to 15 °C (59 °F). 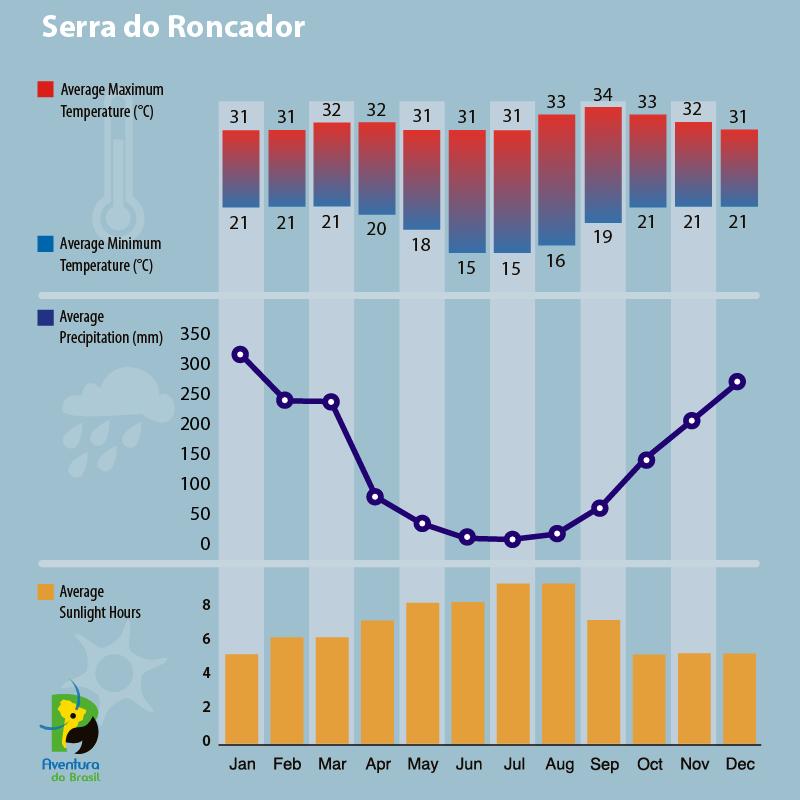 The wild, relatively untouched nature in the Serra do Roncador region makes it an impressive destination year round. It is always very warm and tropical, although it only cools down somewhat at night during the winter from May to September. Throughout the rainiest months in December and January, some tours are more difficult to make and wildlife is less frequently seen. The best place to start your hike would be the local town Barra do Garcas.
Tourists experience the region as particularly attractive in the transition months of April and September (give or take), when the sun shines for the most part and the rivers carry enough water. For a trekking tour, May to September would be the recommended period, as no rain is expected then.