To help you plan your trip to Ilha de Marajo, you will find below some important information about the regional climate and ideal times to travel.
Due to Ilha de Marajo’s dense equatorial location, the seasons are not very pronounced in this region. Instead, in the northern region of Brazil the year is divided into rainy and dry seasons. Ilha de Marajo’s tropical climate has a rainy season that takes place from January to June and a dry season from July to December.
Here you will find all the travel packages and further information about the region.
Temperatures remain warm to hot year round and hardly differ. The daily temperature low averages at 23 °C (73 °F) throughout the day and high temperatures reach 30 °C to 33 °C (86 °F to 91 °F). During the dry season the weather can be a little hotter than during the rainy season. Water temperatures are very warm year round at 28 °C (82 °F).
Ilha de Marajo is one of the rainiest places in Brazil, which can produce 190 mm to 420 mm (7.5 in to 16.5 in) of precipitation per month throughout the rainy season. Even during the dry season, 20 mm to 180mm (0.8 in to 7.1 in) of rain is often expected. Whether you travel to Ilha de Marajo during the dry or rainy season, a raincoat should not be missing in your suitcase.
From January to June there is an average of only 3 to 6 hours of daily sunlight on the island. Throughout the dry season, however, you can enjoy 6 to 9 hours. 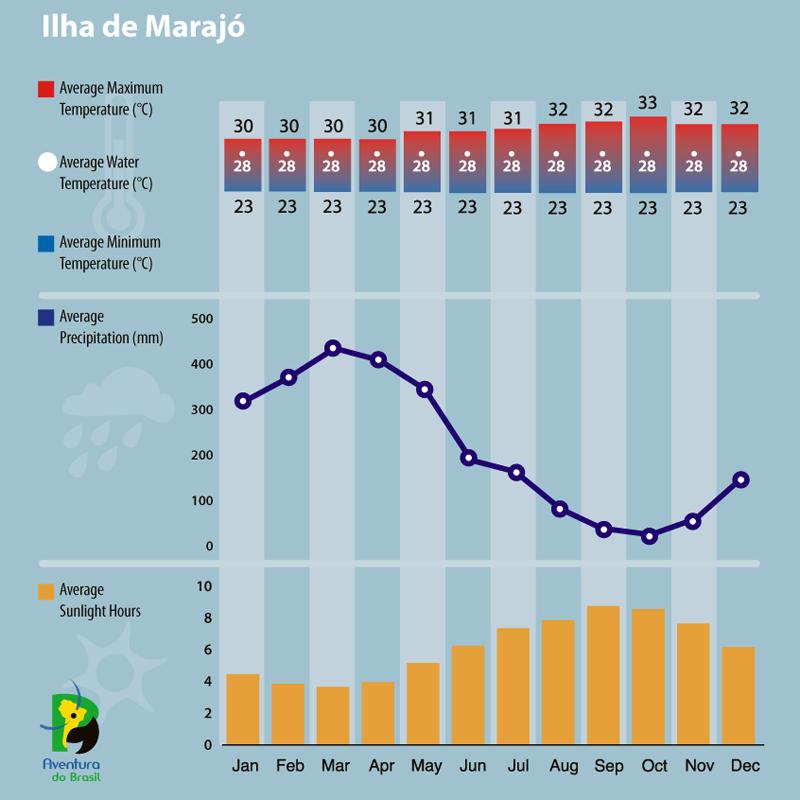 The sharp divide between the dry and rainy seasons in Ilha de Marajo is astoundingly clear, thus determining our recommendation for the most ideal time to travel.
During the rainy season, large parts of the island are flooded and barely accessible to say the least. It would be difficult and unpleasant to embark on an excursion at this time.
The best time for a vacation in Ilha de Marajo is therefore during the dry season from July to December. The weather on the island is comparatively dry, allowing for smooth and enjoyable excursions. During this time you can also enjoy the numerous beautiful beaches, which are often flooded during the rainy season. In addition, the dry season is also more suitable for observing wildlife, while reaping the benefits of maximum daily sunlight.
However, if you don't mind the rain and have the appropriate equipment with you, you can also spend a few nice days in Ilha de Marajo during the rainy season.
With our five-day Belem & Ilha de Marajo Economy Package you can experience all the beauty of this island firsthand. Besides an exciting ride on a buffalo, we will go for a hike through the mangrove forest, discover a charming fishing village and relax on one of the island’s beautiful beaches.